What would you like to ask Giorgia Lodi and Andrea Borruso:
- To what extent keeping the Covid data closed is hampering the fight against the pandemic

What would you like to ask Giorgia Lodi and Andrea Borruso:
I have read your petition and I followed the link to Integrated COVID-19 Surveillance of the Istituto Superiore di Sanità. The “open data” they offer shows cases by date and cases by region. Is what you are demanding the right to see the raw data that creates those totals? How personal is that data if it is disaggregated?

What would you like to ask Giorgia Lodi and Andrea Borruso:
What’s thing number one you would do (with the data, but not only) if Italian COVID data actually became open and accessible to everyone?

Thanks, this looks really interesting!

I have a second question, that concerns data on the COVID apps for tracing. Back in the spring of 2020 there was a lot of attention, with most major governments launching their own apps: and a lively debate on whether those apps would work, and whether their benefits were worth the risks to privacy. We also participated in that debate. People in this community tended to see the emphasis on apps as a sort of technological hail Mary, and were cautious about the usefulness of the apps in this pandemic, though more upbeat about the next one.

A surveillance pandemic? Results of the community listening post on risks for freedom in the wake of COVID-19

One participant had this to offer:

I am currently involved with a group building a contact tracing app. But I am uneasy, actually thank you for giving voice to my anxieties. I do not see my colleagues discussing the use cases for this tech. I do not see them asking themselves if their solution is going to be effective. I do not see them discussing failure modes of the technologies. Almost everybody is hiding their head in the sand about the consequences of these solutions, intended or not.

Almost a year later, we are left wondering about the effects of those effort. At least, we should have ample grounds for an evaluation. But we are left wondering: the Italian one has been criticized; so, apparently was the German one. There are more positive analyses for Switzerland (paper, paywalled) and, especially, the UK, where it is estimated that every patient who tested positive and agreed to notifying her condition via the app resulted in 1-2 averted infections (paper).

In all this, the Italian app has the merit of maintaining a repo of open data on GitHub. The English/Welsh NHS COVID-19 app also has a page of downloadable data, although I cannot find a license. But it is no so for the Scottish and Northern Irish versions of the app. One of the saddest cases might be that of Belgium, where I live: no official data at all. A recent working paper by U Gent had to resort to an online survey. Only 2.2% of respondents had ever received a notification of exposure from the app (paper).

What do you make of this situation? Why are these data so difficult to obtain? And who do you think is publishing them? Is it the companies who maintain the software (that seems the case, as I cannot find the data from the app on the Italian government’s open data portal, they appear to be only on GitHub)? Is it the public health administrations?

I think one of the main problems about the resistance against governments and health authorities collecting this data via the apps is that the duration of data aggregation is unclear, so is the temporality of the pandemic. This might only be the start of an era where such digital certifications, facilitated by AI tech, will be issued with less and less concern for privacy of individuals. We already know how the pandemic is creating extra vulnerabilities for people on the move, border regimes, the class-based inequalities etc. There is now the strong debate about the vaccination certificates and whether these should be only in paper form or also a digitized version that talks to the tracking app data. Many concerns regarding travel rights, right to not be vaccinated…The reason for data openness not being there yet is also due to the bleak approach regarding EU policies as well as national policies on this. The whole thing includes multi-layered approach surrounded by many actors; even the health authorities and their relation to state governments as well as EU governance is a problematic issue in the macro level. The micro and meso levels require more nuances and include insider wars at the moment.

We definitely need to focus on the quality of the data and on sustainable processes! Current, at least in my country, we are still struggling for this and results show that. In addition, from my point of view there is a serious problem for health data and their degree of openness. It is true that it is not an easy domain because it is important to combine openness and privacy. Probably I would invest on this. It is so much important to find the right balance and privacy cannot be an obstacle; rather a right to be always preserved while keeping open the overall knowledge.

Hey @Asjad, you made it! Welcome!

Not sure they are baby at all

but I am sure they are necessary and we need to really start from these:

What do you think will be the next big topic to focus on and to demand open data after the Pandemic crisis?

The only important step is that the open data is gone. At least those of the public administration.
I try to explain

Open data must no longer be something special, but one of the automatic consequences of the work on public information assets. It must be like opening a water tap at home, a fact that can be taken for granted: quality assurance, available on request, whose contact person is known, whose process documentation exists, etc.

Thanks! Yes I will listen in. Curious to see the discussion.

one of the main problems about the resistance against governments and health authorities collecting this data via the apps is that the duration of data aggregation is unclear, so is the temporality of the pandemic

Ok, but the question is: why would that be unclear? If we are talking about apps, the raw data are timestamped to the millisecond. All you need to do is pick a method for aggregation (example: “daily, from 0:00:00 to 23:59:59”) and document it in the metadata.

In general, in this story I am fascinated by how things that do not look like rocket science, like the aggregation, as you say, become seemingly impossible. In Italy there is quite some pressure to publish. @giorgia.lodi, @aborruso, why, oh why do they not publish?

And, more technically: which data are still not published, despite pressure? Here I am asking mostly Giorgia and Andrea, and referring to Italy, to begin with.

Open data must no longer be something special, but one of the automatic consequences of the work on public information assets.

OK, Andrea, we agree on that. But the COVID mess really brought it home: we seem very, very far from this “natural” way of handling public data. COVID data are urgent; there is a high demand and a lot of attention (our mutual friend Piersoft made a dashboard that got tens of millions of views); no privacy problem at all, since all data are aggregated. And they are “classic” open data, data gathered for administrative reasons that can yield extra benefits when shared.

And yet, no joy. So yes, things should work just like you say… but what is your opinion on why they are not?

First: there is a structural tendency of governments towards a strategic use of information. Open data and open modelling limit such use, so that is an obstacle to their adoption.

Second: there is an issue with the independence of the institutions whose job is to gather, publish and use the data. Science should be independent, but can the Koch Institute really annoy the all-powerful federal minister? Here I see a role for civil society, and organizations such as Andrea’s own Ondata.

And third: publicly accessible data can help in building public trust at a time when even governments manufacture fake news (though, in Seehofer’s defense, his intentions might have been good). But, de facto, this does not seem to be working. We have (some) data, but trust is super low. In Belgium anti-vaxxers run rampant.

What, in your opinion, is going on?

First of all, what an amazing story that opens to so many issues also ethical let me say. To answer to this question: Probably yes. Take into account that knowledge is power and having informed citizens implies having less control on them. Open Data enables a wider knowledge and possibly citizens who can reason and develop their own opinions. It is exactly the contrary wrt any populism that speaks to the first impression of the people who do not know about complexities of the problems of the society.

Second question. Yep indeed. Opening up data allows more people to control that. These situations can be overcome. BTW: I am now in an research Institute.If the government asks me for the catastrophic scenario I might want to show that but facts guide the Science and only that.

Third question: Because we have many data of poor quality and this prevents to see a real impact of its reuse. In addition, many important data with a strong and direct impact is still closed I am afraid. This means that people cannot appreciate the potential of opening up data

Many people share personal data for inconsequential services or comfort all the time, but it seems that for something like contract tracing for the virus or in general anything that is not an app people choose for their own comfort there is a lot more scrutiny used.

Do you think that it is important to always take these opportunities to have those conversations about privacy etc. or do you think that sometimes necessary data-sharing is inhibited by it becoming an exercise in the discussion around privacy that people avoid in so many relevant parts of their lives where the data-sharing would be far less necessary but is done for more nonchalant?

@Asjad here is a civic hacker based in Vienna. I just met him yesterday on Twitter, but am in awe of his great dataset of EU COVID data at the NUTS2 and NUTS3 level. 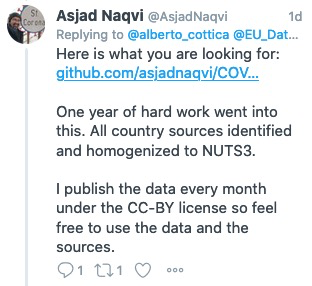 Asjad, what is your Europe-wide impression? Do you see many disparities in open data strategies, or rather similarities?

What would you like to ask Giorgia Lodi and Andrea Borruso:
- To what extent keeping the Covid data closed is hampering the fight against the pandemic

I tell you the Italian story. For days some Italian regions complained for the government decision to put the region in “red”. Not sure you know that based on some data (mostly closed to everybody) the government takes decisions on closing or opening up social and public activities. They claimed that they were orange or even yellow (better colors because most of the activities are tot open). And they asked to be moved at least in orange area. Well, we do not know precisely if the first government decision that limited so much the freedom of enterprises and citizens is correct or not. With more open data probably that strange situation with continuous controversies could be easily and quickly fixed!