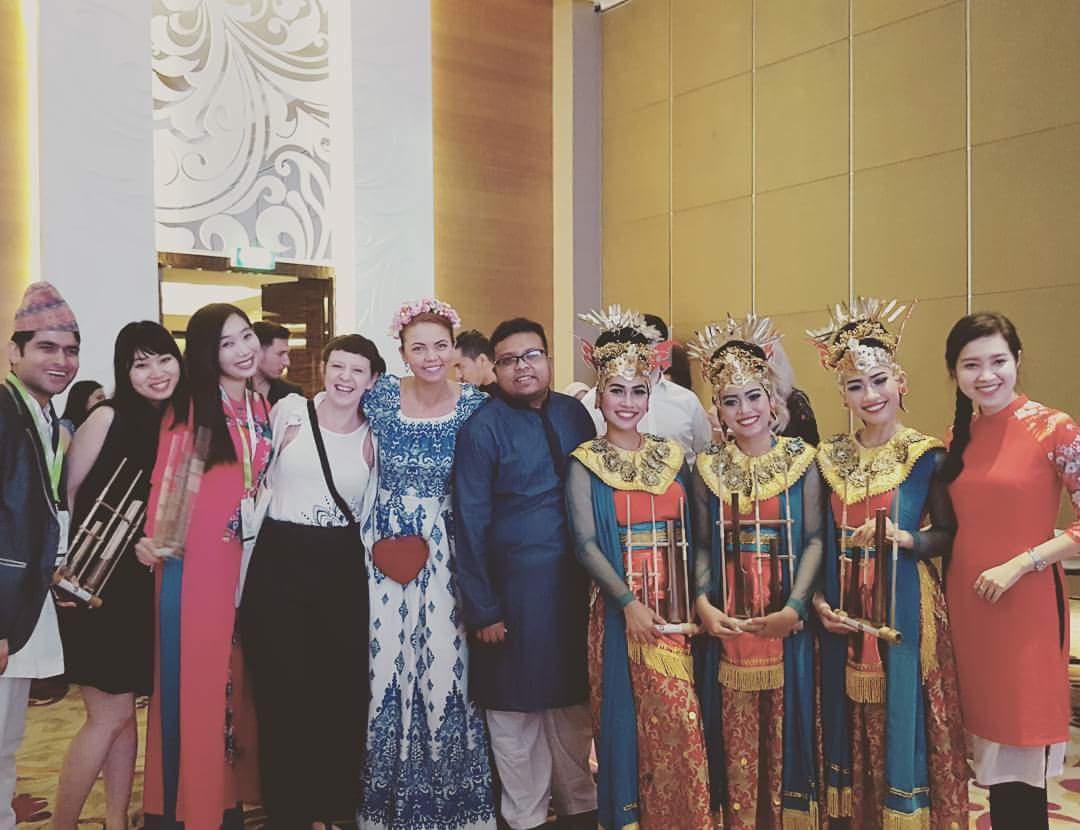 Scouting for innovation has become one of my hats some time ago, as i became engaged in building, expanding, improving and shaping a network of creative heads and misfit changemakers. It is a space that sort of extends your juvenility - following those who thinker, improve on, and manifest endless curiosity and passion for knowledge has this incredible effect. It also preserves the naive, since one preserves the optimism of those who try not to give up and keep on imagining, designing, and building the better future in one way or another.

Youth Global Forum, like other events dedicated to creating a platform for these relentless types, sparks exactly the same feeling of excitement and empowerment. The organisation Youth Tim, which has organised similar meetings for 7 years now in Europe, for the first time invited dozens of changemakers to meet outside of it. The idea was brilliant, as we ended up exploring the Indonesian capital, Jakarta, a place of incredible potential and quite visibly heading towards technological growth and sophistication. Indonesia is a place where high quality, cheap 4g is ubiquitous and its main cities have clean, fast Japanese trains and incredible high rises. At the same time just from a very superficial investigation one can see how it struggles with cleanness, traffic, air pollution, poverty and poor living conditions. Writing these words, i sit in a packed minibus to a mountainous village not far from Bogor, yet the views outside are precarious.

The forum is one of two annual events that cater the growing talents. They organise a summer school, where youngsters equip themselves with knowledge and skills for their future social businesses, and it happens every year in a new location (the upcoming one in Austria), and then there is a forum - an offline platform with funding opportunities. During the forum youth meets with experts and networks, and those with projects have a chance to pitch their ideas to a group of panelists, get their feedback, and based on a popular vote - win grants to make their plans come true, or fast forward the implementation. The budgets varied drastically - from 30.000 euros to 700. Everyone had an equal shot here. There are also a couple of scholarships to business schools in Barcelona, Zagreb and Jakarta awarded to the finalists.

My focus was on female entrepreneurs who took part in the competition or came to the forum. I ended up including also projects led by men. So what do these changemakers do?

Olga is an illuminating person - before she went off to become the winner of the competition, we spent a lot of time discussing everything from war in Ukraine to our love for Indian food. Her project came about as a result of observation and personal experiences - she felt disconnected from her own grandparents, and so did many of her friends. But a few years ago she met her German teacher, now 86, who became a surrogate of an emotionally connected grandmother to her. This is when she started thinking of opening a place that would connect young people from disenfrenchised families primarly with lonely elderly who need affection and seek for things to do. After trying out different ways to make it happen, including an obviosuly rigged state organised comoetition which she won not to ever see the money, she went on with her life and started working for a marketing agency, until the youth forum idea came up and it made sense to give it a try again.

Olga talks passionatelly about Russia and problems of uniformity, high expectations about the youth (especially women, who have to be stunning physically and make great careers), isolation and alientation of the eldrely and lack of strong social bonds. She says that the trust and warmth that used to be a Russian characteristic vanished with the transfirmation and it gets worse. People don’t smile, the family values fall far behind everything else, and very few peope have means, courage and energy to fight with the system. Olga already tried once running a social project and after teo years she was exhausted and empty.

From old to young is an idea that resonates very well with what my network does - bridging idle resources with needs, especially in cases when there is so much potential for exchange: lonely, still fit and not too old people want to remain active, while many of these youngsters whose parents could not afford extra curricular activities or just cannot give the emotional support to their kids. We have a match here - and there is a vast range of ways in which these two groups will interact. Olga with her 6000 euros of grant from the Youth Time International Movement will now start scouting for space, equipment and start building in offline platform in Moscow. Let’s see where it takes her. I keep my fingers crossed for her project, as it addresses issues that are increasingly pressing in the modern world, yet the governments mostly seem to busy to engage in imagining alternative modes of dealing with aging, or with underprivledged youth. It might start as simple as it is, by inviting elderly to hang out with the kids, and it might organically grow into a model case. Time will tell.

Next profile: meet Sri, a young Indonesian researcher who came up with an idea for an organic fertilizer.

Always glad to see you growing your network @Natalia_Skoczylas!  If you have a photo of you and Olga… let’s just say it would be nice to put a face to the name.

Can we help in any way? To the end of the post I was hoping her work would not be in Russia as it feels a little far away, but if there’s anything we can do let us know. 6000 eur could be ok for the beginning, but if she is looking for a space it can’t be nearly enough. Why does she need a space anyway, isn’t it possible to do this in and outside existing infrastructure, say elderly homes?

I invited Olga here, lets see what she says. she will use a public space, already found a suitable one, but from what i understood she doesn’t want to do it in elderly home - this is for independently living individuals rather at this stage, who need a hangout space.

I am frustrated enough editing articles on the mobile and ipad;) but maybe i can find a pic, if not, will do it when i am back ib Europe

Hi, @Noemi! Thank you for the attention to my project and your willingness to help. Lets add each other on a Facebook?

You are right that 6000 eur would help me to start my project and for its future development I need to find a permanent funding with the help of sponsors and partners or Goverment support.

The main aim of the project is to unite independently living individuals who want to share and transfer their skills, knowledge to a young generation -children who want to get a hobby or additional education, but dont have enough money for that.This project could create new possibilities for older people and youth in the aim to learn together and benefit from each other in the same time.

Hey Olga, my account is inactive for a temporary period - mainly through January, as a sort of digital detox

I will surely add you when I reconnect!

So far in our conversations here on edgeryders we came across this idea of intergenerational support but mostly in this idea of youth living together with elderly - in Belgium, the Netherlands, or further in USA and Japan. Have a look and see if it’s something that helps you get new ideas? What’s interesting about those is that they connect the two target groups using existing spaces, repurposing them.

FB and other projects

Noemi, digital detox - is an amazing idea ) Thank you for your advice, right now I am analysing different but similar to my idea projects, trying to get more knowledge and foreign expereience in that way. Because to realize that project in Russia is really not an easy task )

Speaking of Russia and changes

I just finished reading Secondhand Time by Svetlana Alexievich, (winner of the 2015 Nobel Prize) which chronicles what the change from USSR to today’s Russia was and is like for everyday people in many parts of the former Soviet Union.

In that book it confirms in great detail the statement above, “that the trust and warmth that used to be a Russian characteristic vanished with the transfirmation and it gets worse. People don’t smile, the family values fall far behind everything else, and very few peope have means, courage and energy to fight with the system.”

We make the changes

Dear John, I have not yet read this book, but you make me interested to read it. Thank you