How is living space related with care? Meet Sigried, an Interior Designer devoted to changing how we look at space

I met Sigried some years ago when I was working on a Parc project in Brussels and we had long discussions about the way she looks at the balance between public and private space. Between then and now she experimented around public – private space in Istambul, the Netherlands, Brussels and chose to practice her philosophy with her boyfriend, a product designer by living small (We Live Small is an on-going experiment developing tools to make living in small space possible.)

When we meet again she comes back from a week working in her apartment and starts explaining why they chose to live small. For her living in a condensed space within the city is ideal if you design it well. In Belgium people have the reflex to buy fast, and you feel a societal pressure around it. Because buying in the city become impossible, people find big houses farther away from the city. But big houses means a lot of possessions, and it means working harder in desk jobs in the city, which means again more stress. So the logical decision to stop this infernal spiral for them was to choose to live small, really small, and use the exterior as complementary.

The secret of living decently in the city is to manage space and time differently, but she is aware that it becomes more difficult. Public space isn’t anymore a space for everybody, but a space for nobody. A cleaned-out space that only looks pretty. Because our fascination for more sterile environments we lost the skills to interact with each other. Who needs to interact with your neighbour if you have all the space you need inside your private home. Living small could bring back the necessity of interaction and borrowing stuff from your neighbours, helping create a much-needed social fabric to your neighbourhood.

When she works for the semi-public private space project Huis VDH she finds the same logic. Creating common spaces that gives the feeling of a home, but are able to invite people over to use it in certain ways. Why have a big living room with kitchen for social events that you organize four times a year at home when you could share such space with other people. Some things can be privatized but not everything. In the same line of thought she sees empty spaces above shops or pubs and restaurants as an opportunity to create common spaces for people living small. You could think: why not set bigger apartments above those places? That could immediately make it difficult for the bar or restaurant holder to continue his night live activities, and also this plays an important role in the city.

‘But how could it directly be linked with care?’, i asked her. She takes the example of elderly care, also discussed in the interview with Ginette where people even if they live in big houses don’t have the time anymore to care for their elderly and put them into homes, from own experience we conclude that the home isn’t the best designed space to give good care. Making effort to create a nice environment for the elder people could help them feel well longer. We know from studies that interaction is a key in stopping elderly dementia. So having public spaces designed around giving care and sharing part of your lives with unknown people could be a major incentive for our future problems with ageing population.

When living in Istanbul it occurred to her that people interacted much more easily with each other in the street, even complete strangers could discuss with each other when waiting for the bus. She doesn’t know exactly why it occurred much more often in Istambul then in Brussels but she had the feeling the way we use time was part of the solution. Living small gives you much more time to just sit around, be outside and make you car independent. Only this simple part, of not having a car makes you much more able to interact with the people you see. But don’t be alarmed; this discussion didn’t became a ‘everything was better in the past’ discussion.

Cascoland was another project where she worked around public and private space. One of the tasks she had was to implement a sharing community inside a mixed neighbourhood. Like in Germany or Suisse they printed out little signs of objects anybody could put on their door to show they can lent this out. What was interesting was the conclusion: when explaining the concept to people with only Dutch roots they answered almost all the time: but I have nothing to share. For them it was a difficult step to share something of their belongings with their neighbours. When explaining the concept to people with Arab roots for example they didn’t have a problem with sharing and where found of the idea, but had a problem with the fact the stickers would become an opportunity for other people to come inside. Inside their community they already had all the needed interaction and didn’t want something external extra. A compromise could be the organization Tournevie that puts in disposal several tools for the community. A semi-private public space, as we understand it.

We conclude on the fact that the creation of digital tools will not alone be the solution, what we need are well thought of spaces that give people the possibility to live at a descent standard without needing to fall in the spiral of a purely private ownership.

Sigried will be participating to the Open&Change Workshop in Brussels and will be working on the scenography of the place to give it a welcoming space to be creative about care solutions.

agrre and some additional points

b) phisical proximity and real realtionship

c) digital can be intersting to share learnings and expereine and communicate with somebody far away, to discover new words…similar and intersting to you (this is not facebook, this is something that includes people willing to share interesting relationship adn prctises)

It is true that space and care intertwine. At least, this seems to be the experience in Edgeryders. The kitchen was a fundamental infrastructure in the unMonastery; and @Luisa and @Cindy_P. , while wondering how to support refugees, both have found that cooking is fundamental to care (one, two)

Even in my own home, at the second iteration we acquired two fully functional kitchens, but we decided to only ever to use one of them, because this leads more naturally to us mingling, chatting, spending time together. I even put music equipment and computers on the work surfaces and the stove of the unused kitchen, to make sure no one is tempted to use it!

You are on the right pass.

It is very important for social, psycological health to change the environment we are living in. Current living environments are a cause for all kinds of problems. So we want to encourage you to design new community and cooprative spaces for living and working.

How can we best get in touch ?  I am enthusiastic to see these topics adressed here.  These are topics I have been interested in over the last years, and would be glad to collaborate. I posted on the edgeryders huis vdh post some time back.  I am based in Brussels. Lets get in touch ! Feel free to email me : dante (dot) monson (at) gmail (dot) com

Or add me on fb : https://www.facebook.com/dantegabryell

Is there a recipe?

My sister lives in classical Cité house in Ghent. Cité houses are small, cheap houses that were built for the former poor working classes back in the day. They are mostly built in a way that allows more interaction between the inhabitants. There is a shared open space in the middle, which is free of traffic and is usually filled in with things people chose: tables, barbecues, little gardens, …

The cité where my sister lives is very lively. There are a lot of social interactions because people spend a lot of time outside, organise things together, borrow stuff, etc. Everyone knows everyone.

Then again, this is a lot less the case in the cité right next to my sister’s. People don’t interact that much and the social ties aren’t as rich. I’m not sure what causes this, because the same basic elements are there. Does it come down to the people? What do you think? 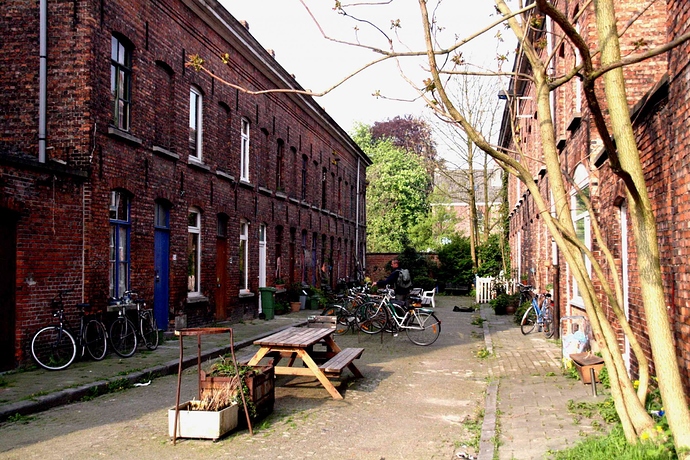 This looks great to me, actually. Basic, but “self-contained”, with the courtyard providing already a layer connecting the different units.

The difference in culture between one cité and another does not surprise me a little bit. @johncoate has written much about how a bunch of interacting people are turned into a community, and the very many things that could go wrong.

This all ties back into The Reef.

Thanks so much for the beautiful description.  This is a conversation we’ve been recently having at Woodbine.  @yannick i think it is really important how you combine the idea of space with the idea of care.  Living in NYC, it is such a struggle to even have the space to think, let alone the time to take care of yourself.  Then with the ever increasing rent, you become more and more attached to “work” or the struggle to compile a bunch of part time jobs together.  Hence the ubiquitious greeting in the city is the “I’m so busy, just really busy” idea, that once said is usually completely understood to be a chronic state.  But we are in the process of expanding a few hours upstate to create a bridge between the urban and rural environments.  To add our energy and thought to the community upstate but also as a way to connect rurual struggles with the increasing social struggle in the city.  Last week we were all up there together and it was magical to have the time to sit and talk and just be with each other.  In addition, there is a long dirt road that connects all the houses, and there was a sense of community and care that existed that I haven’t felt in the city.  As one of our comrades said, “we left the capital of the world, and in this little town, our world just got so much bigger.”

Excited to continue this conversation and see the work you all are doing!  Be well.

@Yannick pinging you so you don;t miss Woodbine’s comment above.

Is there a way to contact Sigried? If she’s in Brussels, I would love to meet her!

Hey @noemi, will answer the discussion from @woodbine later, in the meantime i send Sigried a message to join  the conversation.

I like the points you raise about the size or scale of living, public and private space, property and community, but we must not forget to think these in relation to our context of global capitalism, and how it claims a monopoly over reality, how to work, live, love, design, relate to each other and so on. Because it penetrates, colonized and commodifies every aspect of our lives, it is not just an economic, but a deeply social and political problem. It is a program/ logic/ system in which (human) life has been made dispensable.

So who, living under this oppressive system, has the power to actually shape space? In what ways do these dominant spaces teach us how to move, talk, commune? What do we loose?

I can’t help linking this conversation with the use of chairs in the public and private space.

“Before these strange implements of combined architectural/linguistic/physical/political torture, we did not sit, I’m telling you. We had no ‘seat’, no ‘site’, no ‘situation’.” (Jimmie Durham, 1998)

Cu in a few weeks,
Coni