In Search Of Transnational Identities - or Stereotypophobes Around The World

Pop Culture has always been my culture. I’m one of those who believe you actually can change things also through Pop Culture, for me there is a clear line from Micheal Jackson to Barack Obama. I see Pop Culture as a language which has given people all over the world possibilities to understand common references, re-create identity and make own choices about who they want to be perceived as, non-dependent on given entities such as ethnicity, nationality, gender, sexuality and class. Add Internet to this and there are never seen before possibilities of co-operating, sharing knowledge to re-writing maps, change structures.

To be a 2FACED1 is a state of mind, the actual expression comes from finding a common denominator among the people I always hung out with. We had a common way of letting our identity depend on our environment, all of us were highly aware about existing stereotypes related to our ethnicity, nationality, gender, sexuality and class. I realized we were trying to avoid them and sometimes play with them to make people think twice about who we were. So to be two-faced doesn’t mean anything negative here, it rather explain the double folded view you have on identity if you’re not the existing norm in the society. With this double perspective comes understanding also for other peoples situation. To the feet in different worlds, means being able to move between them but also feel rather at home in that space in between. You dare to step out of your comfort zone and become one of the new identities where ol’ categories are mashed up and where rootlessness and non-given identity just means major possibilities.

The network of 2FACED1s includes progressive stereotypophobes with this double perspective on identity. 2FACED1.com is a display-window for this mindset, via two photos it shows one persons two different faces;

WHAT YOU WANT TO BE

WHAT YOU FEAR TO BE

This leads to a discussion about stereotypes and inner fears of getting misunderstood by the surroundings. Thoughts that every thinking modern day person does reflect upon. We’re asking every day people from an innercity context where old categories as ethnicity, nationality, gender, sexuality and class are reassessed, why they choose to look like they do. We’re diggin’ deep, peeling off garments, codes and attributes. We’re searching for transnational identities - is the conclusion that we choose whoever we want to be today?! 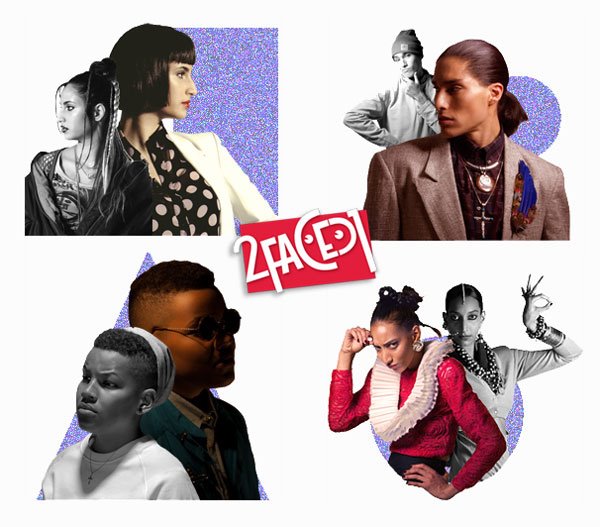 Hopefully these 2FACED1’s interviews inspire the reader to alternate ways of live instead of recreating stereotypes which maintain present injustice structures.

Fascinating. Aside from my own double identity as musician/economist, there seems to be an Internet implication here: that you don’t want to be the same person to different people. And that must mean Facebook is bad, because, well, it is famously difficult there to show different things to different people, and you end up with potential employers looking at picture of you drunk, stoned, or angry at a street demo.

A 2FACED1 world (if I understand it correctly) has a different information architecture than most of the online world, I am afraid. Charlie Stross makes this point beautifully here.

A more fluid way of looking at identity

I will edit this text so everything is clearer  in a bit, was in kind of a rush yesterday. But to answer yout question, Alberto, I don’t think it’s about trying to be different persons in different context, like these would be excluded from each other. It’s rather a way of raising acceptance for a more fluid way of looking at what identity is, If it wasn’t our 2FACED1s wouldn’t  likely share their most intimate phobias on an open platform for  i e future employers to be able to read. Very much in line with the structure of Internet I would say. Will edit in a bit! Thanks for your comment!

I can´t tell you how much I love this project Decida.  You wouldn´t believe the number of contexts I come across where self proclaimed champions of this or that just feed into a narrative which I despise. Where people are  locked into an identity defined by someone else. Simple, easy to categorise and lable. Whether its on the basis of age, who you happen to be sleeping with at the time, what you happen to be wearing or not wearing, or a cursory glance. They can yack on all they want but in the end what it all boils down to, where all of  these underlying notions land, is in desire. Desire  for others and desire for the self. The dynamics of desire. Desire can, and is constructed. It is more than the sum of its parts. And as soon as you try to deconstruct it, the appeal is lost. Some things you understand, learn, by doing. But this requires exposure…comparison. I think this is where your project is so important, for me it´s a kind of mirror.

New levels of awareness appear to lead organizational evolution and create enhanced discourses that shape personal and institutional realities. Visionaries, individuals with a higher level of consciousness, have the responsibility to provide guidance and to support new ideas that can re-author impoverished realities.

You totally put what I feel in words! It’s also the same way I feel about Internet and being a part of a generation remembering the time before it, I feel that we play a very important role of shaping the Internet of the future.

I think is a good tool to create new realities and reinvent the world. Being disruptive is something that counts while trying to contribute to something bigger than ourselves. And the idea of an ‘image’ which is fluid and adaptable to a specific context should not be considered as fake or the container for a multiple personality disorders but just as what it is: the possibility to express creativity in many ways, the ability to play with one’s own image.

This is mindblowing. Thank you, Decida, for taking the time to contribute and open up conversation on such a difficult topic.

To be honest, I never put myself into such deep thinking about identity… meaning that I’ve read particularly about our avatars in social networks, and how our identities offline are recreated by that avatar, apart from the other way around as we like to think… which means there’s so little control not just when it comes to privacy issues, that Alberto referred us to in his comment, but also control over who we’d really like to be perceived as…  Still, there’s the illusion of control.

I have three points/questions to ask, though:

Thanks sooo much for this!

To understand own position and privileges -> 2FACED1

I’m super glad that you feel this project! I will start with saying that part of why we choose to use the type of media we are, including photos/internet/art, for this project is because we think it’s the easiest and most effective way to reach a lot of people from different backgrounds. Since we are talking about alternate ways of viewing identity which claims certain amounts of thinking outside the box (system) - ness, I don’t expect people to understand all levels of it at first sight. For me myself it nearly took 15 years… It’s an on going project, and it’s still at an early stage.

The idea is to fill “the library” with tons of stories of the 2FACED1s, and then with tools of statistics be able to direct you, the reader, to the stories that will resonate with your life/your identity. But all the 2FACED1 stories are still important, since they showing a similar take on life/identity; it doesn’t matter where your start (in a certain country, ethnicity, gender etc) - it’s the journey, and the understanding of the own and other people’s positions within a structure, double perspective, that is important.

At the moment we’ve hand picked interessting people that some of the us in the crew knows / know of, thanks to Internet and our own pop cultural networks with people from other parts of the world, the plan is to do shoots in other countries too. But it’s really often that I read an article and just goes “OMG this person is such a 2FACED1”…  In the future I love more people to themselves contact us and telling their story,  add another one perspective.

Most of the current 2FACED1s every-day-appearance is a “light” version of the one they want to be perceived as in the photos, either because the’ve just started the journey to what they dream of becoming but also because they maybe lack some of the tools to express it visually.

Important to know is also that FACE2 always contain a little something of the person too, otherwise it wouldn’t be addressed as an antithesis at all, which you realize when thinking a bit about it. And usually each 2FACED1 has more than one character they’re trying to stay away from.

For the ones actually being the Norm, we wish this person would see their own position in a structure and understand their privileges, like a true 2FACED1. It can be really hard on yourself esteem when you realize how your talents are based mostly on the cultural capital you got from mom’s instead of some divine talent, but it will on the contrary increase the understanding for other peoples actions and situations, and give you a feeling of coherence. And finally, now you can start to think about what you really, really can achieve from your privileged platform, that also can be of good for other people.

Ps.Also see the 2FACED1 STATE OF MIND tag on my blog: http://2faced1.com/tags/2faced1/2faced1-state-mind

How are you building the 2FACED1 community?

For some reason I cannot access the site now however I checked out your vids on youtube.

I wonder how large your user base is now? How do you reach out to people and how do you keep them engaged? I guess this is a project lots of young people would be interested in but how do you get the word out and make ppl discuss about your content?

there are still A LOT to do

The server was down the exact day you did comment this, but now it should be up working as usual, please do go there, since that’s the easiest way to get an understanding of what 2FACED1 is. The site is our display window so to say! (I don’t even remember what videos are up on youtube…!) . We have about 21 000 page views a month on the site at the moment, mainly from the States but also many from in ex. Sweden, Uk, France, Denmark and South Africa. Since we’re still in phase 1 of the site-project, and need to at least do twenty 2FACED1 stories until we can move on to the more interactive phase, there are still A LOT to do. But we keep building via our own pretty big pop cultural network, people in the 2FACED1 network are artist in their own right with their own platforms, often very active on the net. So at this moment - word of mouth so to say. Updates on it’s way!