Lote as a process, an open source project -- Lote3.1 alpha and Making #Lote4

When I was writing this I was especially thinking about …

When I was writing this I was especially thinking about some Dear Edgeryders who did not make it to Lote3, but contributed a lot into making it, especially [Auli] , David [Vidrij Da] and Michael [mishek] .

So all those contrubutions can be re-cycled :) into making #Lote4

we can make it Happen

and let’s keep being motivated

sounds promising DoMa – when do you descend upon the unMo?

let’s hope we meet there soon

I hope to see you there soon [Bembo Davis]

when do you go there ?

I will probably come after February, possibly March, how about you ?

I really like the idea  [Dorotea] pitched in establishing lote 3.x as a build up to lote 4.

I have been also going through the literature of edgeryders, lote3 documentation and lote3 aftermath, even though it is overwhelming it is also very exciting to see rich texts generated over the issue of new models of complex social, economic, political and other segments of lifestyles transactions among the people in today’s time.

So, in that respect I propose a roadmap here which I am willing to also collaborate and become active in bringing lote 4 to the global public spheres.

On a very broad level My thinking process about the event, can be viewable here at the Popplet

I have also been engaged with locals (municipalities), hubs (media evolution - malmo, Cph labitat, Nordic Transmedia producers and a like) and other many grassroot/open source groups across Scandinavia … hope to get Pirate party people (both the party and piratebay people), Anonymous group, wikileaks groups, gaming/programmers communities,

This is what I wanted to post regarding materializing Lote 4 , i have been sharing my willingness to [Noemi], {UnMonestary Radio, Formstorm, Viral academy and GameRaid crew} in order to engage lote 4 on a global scale and promote this “MINDSET”

I hope ive done justice in being simple in my idea and profound … lets schedule some meetups from next week (date, timing, venue and availablity can be discussed in this thread) to take on this endevour and come up with to do lists, A list priorities and improvized creativity process

for now we have two proposals of locations,

but we can think how can we use both in the best way !

we can think Big and think Long Term as well

Off to a great start!

You guys, I’m so excited to hear this, a couple of more or less concrete ideas is all we need to get started.

I guess we already have at least two proposals for location, and with you two scouting the north, respectively the south of Europe this couldn’t get any better. I guess where it will eventually take place is a decision of those involved and doing the work, right?

If you want to hold LOTE4 in July-August, this gives us just enough time to organise - last year it took 5 months to get everything in place, although it surely can take less. Especially if one of you is on/near location and connecting the work online with field logistics. Actually I would say this is crucial, it would have made things much easier for us in the beginning, before [Rita O] stepped in.

Adding to the resources we have so far - the “literaure” to quote [Aden] :)) - is a Lote pack we can keep building on, and where those involved last year can summarize our thoughts on event planning and tools. Hangout sounds great!

What form might a ‘LOTE pack’ take? Just like a how-to for organising an event? A checklist and stuff?

What thread can I read where the pack is discussed?

Can someone give me a quick summary of LOTE3 fundraising?

How much did you raise?

How did you do it?

What did you use the money for? What kind of internet access did you have at LOTE3? Were all the meals shared?

Is there a target for LOTE4?

The whole infrastructure in Matera: unMonastery building, tables and chairs, sanitaries, cutlery, coffee and tea maker, flipcharts and markers, projectors, and wifi included were provided with the help of Comitato Matera 2019, those funding the unMonastery. Some of the stuff was paid for, some was borrowed from the people and organisations there. I think [Rita O] might have an idea of the exact amount. We got this support because most of it can be accounted as support for the unMonastery. For example, contracting an Internet provider and having routers installed was in the unMonastery budget rather than the Lote3 budget, and something that they needed to have done anyway eventually. So more than fundraising this was a little bit like cat herding to make sure it happens faster, by the time we needed it.

And then we managed to secure a 1000eur schlarship for Dutch participants.

And this is pretty much it. Fundraising for Lote3 went like: ok, let’s kill 2 birds at a time - promote the unMonastery and secure a venue for the community event. everybody wins. What else do we need? Let’s see who can help and go grab it. This process tends to get messy, but luckily our main partners onsite, Matera2019, were a dependable resource and coordination was the main effort.

Meals were shared, as you can see below, we took turns in shopping and cooking light mediteranean food… or we ate out. 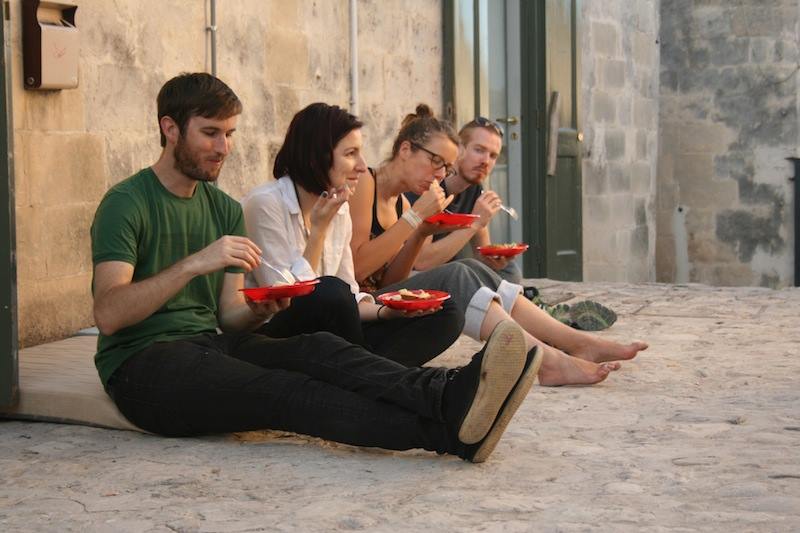 So how much money do you think we need to raise? Does anyone have ideas/contacts to repeat the LOTE3 route and try to get support from a city/concil?

I’m guessing EdgeRydersTheCompany doesn’t have anything in the coffers? BTW, is there a difference between saying ‘EdgeRyders are doing this’ and ‘EdgeRydersTheCompany is doing this’? I’m guessing yes. When I say ‘edgeryders’ now, I just think of a bunch of cool altruistic people. The whole ‘get money from selling ER as a thinktank/boutique’ confuses me a bit. Has ER ever been paid money for work that was truly done by the whole community in a distributed fashion? Suppose I want to hire ER as a thinktank, how much does it cost? What would I expect as an end result? A report similar to the youth survey thing that was the original impetus for this community? Do I get any guarantees about who exactly will do the work? If EdgeRydersTheCompany does ever get money from this thinktank thing, who decides what to spend it on? Is there an ER manifesto/mission statement? What is the political structure? Is it democratic?

I’ve started the pack in the task I have linked to above, I thought of it as a recap of processes and tools we used for Lote3 - textual form. It could also be a more visual kit? sort of an infographic? Whoever will end up doing the task or helping with this can decide on their prefferred format. Why do you ask, got suggestions? Perhaps it’s in the end not even necessary to build a pack, having with us [Dorotea], who’s already experienced with organising Lote…

I was just curious. I don’t have any ideas, cos I wasn’t involved with LOTE3. Are there any good threads/links I might not have seen that you recommend reading? (Anything that might have useful info concerning organising an event like this.)

re: fundraising and support raising letter

Perhaps this post will give you an idea of how we made contact with the community in Matera - which ended up channeling a lot of resources our way, and made our life easier. A dozen participants ended up being hosted for free, we also went to co-design event sessions with Materani, calculate ingredients and costs for the Pasta Party, get hold of fabrics for the session on codesigning unMonasterians uniforms and many more. Looking forward to share more of these and touch base in a community call next week also with Aden and Dorotea.

And big thanks for your interest, I cannot help but wonder how your work is planned this year and how come you can spare a few months to get involved in all this. See, this is where I’m missing the Share your Ryde posts we used to have in Edgeryders Year 1 (later imported on this platform) where everyone introduced themselves quite lengthy, it was a great way to meet one another :)

example: This was my story as a recend uni grad (no longer accurate I think), Alberto’s, and this is another example of a story which spoke to many in the community. Would be great, if and when you had the time, to give this a shot so we can know each other better. The Agora group is a good place for that.

‘Share your Ryde’ -Awesome. I’d say link this on the front page or something,.It should be one of the first things that people come across when they’re wondering ‘what the fu*k is edgeryders?’. ((BTW, can I swear on the platform? …,mmmyep I just did. Now I’m gonna grep your entire platform for swears. hmmm. Is it discouraged? Is it banned? I won’t do it again, cos I know Dorotea isn’t a fan. But the anarchist in me is saying ‘Who the fuck are you to tell me which words to use?’. Anyway.)) …wondering ‘what the heck is edgeryders?’. I wondered this once, and I actually got put off when I saw that it was a company, then it dropped down the research priority rankings and was forgotten about… until I kept seeing people I like mention EdgeRyders and that they all had profiles here. It’s people. Is that stressed enough? Maybe I missed it, dunno. I’ll use magic empathy constructs to build a noob and check this when I have time. I even watched a video intro I think and I was like ‘huh. too much jargon/buzzwords’, but that issue is probably unique to me. I get put off when I hear anything that sounds like corporate talk. Because I’m an anarchist. But now I think it is cool that ER has these business orientated people, too. mmmmm. I’ll think about this more later.

“I cannot help but wonder how your work is planned this year and how come you can spare a few months to get involved in all this.”

ehhh. I can’t promise anything. I’m just helping Dorotea. I have my own motives, it just so happens that we’re in

at the moment. I can’t be responsible for anything. I’m like a child.

My proposal for now was Sintra, Portugal in Autumn this year, possibly October, as from the experience I know It can take some time to put everything together for the event,

but we can consider Lote Summer Gathering as well .

we could actually consider both Summer Gathering in August and Autumn unConference - EdgeRetreat.

I’m all for Sintra (full disclosure: I live in Lisbon so it’s a 5 min walk), and Sintra qualifies for an EdgeRetreat like no other: It is a romantic place and it is situated on the very Edge of Europe!

October is fine. Sintra is also participating in the Mayors Challenge

so one can reasonably expect some open-minded people in the town council, not only these “I’m out to lunch” type of guys.

Why don’t we schedule a meeting with the townspeople one afternoon?

Great idea, let’s do that !

and it’s wonderful to work with open-minded people .

I’m still with a bit of cold, but slowly recovering, so I should be able to do that sometime soon …

Hey, count me in for a meeting!

Please come with us ! (I’ll be glad if I don’t have to do all the talking with my “broken” Portuguese.)

Abraços (which is “Hugs” in PT)

As I was going through some easy to use online based video editing software,http://www.loopster.com/