I will get back to you on this today. Monday 2-5 - I teach, but it is an exam (in-class, on paper), so perhaps I can try to talk to you as they are writing.

Sorry, Zoom is making me update my software!

I think @Jirka_Kocian and I are in the wrong place – we are on the link attached to the calendar invite.

This is where we are…

I wanted to check the code “marketing”, with two annotations. One annotation is mine, but the other is not from our project. 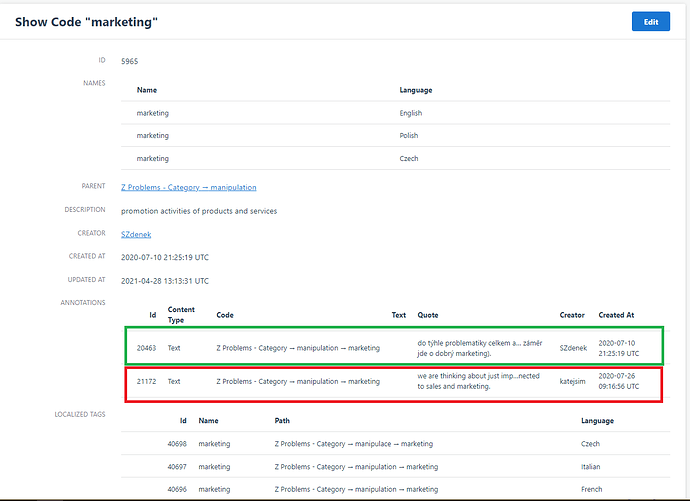 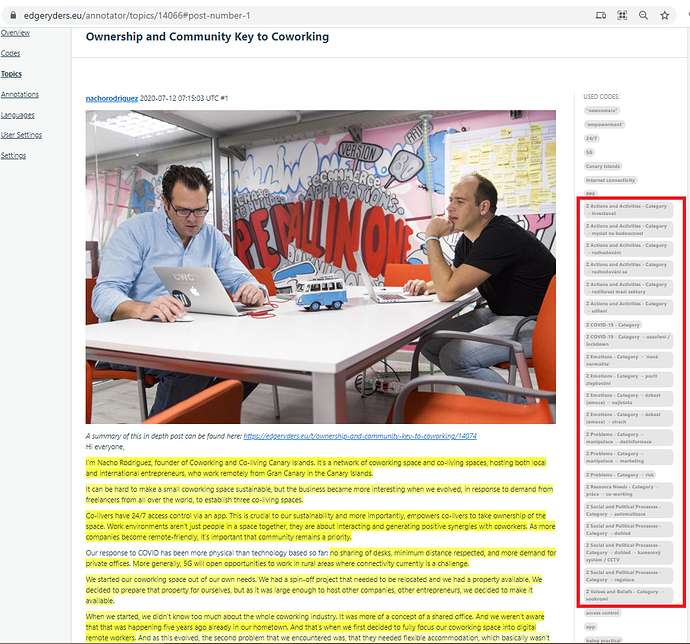 I also wanted to check what are the other +56 annotations to the code marketing and besides “political marketing (by Jirka)” there are codes from other projects (e.g. “advertising”) childed to the code marketing, which again has two annotations - one si mine from our project, the other is from “katejsim”. (see picture) I have no idea how to deal with this. E.g. duplicate marketing one with my annotation and associated “political marketing” will be left under some(?) name and parented to our Z category, the other will be left with the name marketing, the second annotation and children of “advertising” etc.? 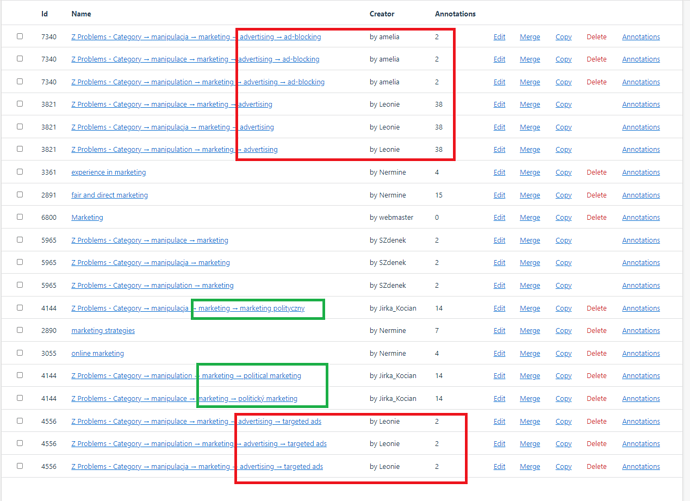 You mean to say, the topic with ID 14066, called “Ownership and Community Key to Coworking”, is not associated with your coding project ethno-poprebel? Indeed, that topic is not tagged ethno-poprebel.

Some of the codes used are codes you developed for your project. That is because other ethnographers re-used your codes. That’s a feature and not a bug in a collaborative ethnographic software like this

Anyone re-using others’ codes should be aware that the name and hierarchy of these codes may be changed by their original author, and thus use them carefully (usually after the original coding project by the other ethnographer has concluded).

So I don’t think there’s a problem here?

Dear All, I am sorry, but I forgot that this Friday (29 October) we have a long POPREBEL Supervisory Board meeting. So, let’s move our next coding meeting to Friday, November 5. Wojt and I will communicate with you on our work soon - we have made considerable progress.

@amelia and @Richard: we have not set up time for our meeting, it seems. I am free tomorrow (Tuesday) after my 11:00 (16:00 in London). But I know Tuesdays are not good for Richard. Wednesday are very busy for me. Thursday?

It is embarrassing but I forgot (again) what link we decided to use. Please someone send it (or I can set up a new one via Rutgers tomorrow). Ciao.

Dear all, just a brief memo, I finished the Emotions Z category review.

Here is a link to my updated work notes which contain my methodological observations and original list of all the codes including the prolinks to the coding view backend.

Here is the table of code review organised according to Jan’s and Wojtek’s approach, contains a full and “Think version” representing the proposed codebook.

For those who do not want to lose time reading the document, my main conclusions after several rounds of review are:

Can’t make it today —will be on a plane!

Super! Many thanks Jirka!

Dear all, just a brief memo, I finished the Emotions Z category review.

Jirka, this is very clear even to me. Thanks for documenting your approach.

The recoding marathon is approaching the final stretch (we see the gates of the stadium). @Jirka_Kocian posted his recoding of Z Emotions (see above). @Wojt and I have made huge advances in several others. Here is our list:

• We do have a lot of materials, but not a lot of stuff related to populism (from the old corpus).
• We could create the Z category of populism related codes only on the spreadsheets.
– Propose list of words and phrases that indicate a sentiment which could support the political option loosely defined as ‘populist’ .
– We have a lot of material demonstrating a rather shaky state of the society…macro indicators, the more sociological analysis based on surveys shows a picture that is broadly much more optimistic than what we find in the field.
-Problems with statistics? They disguise the reality on the ground…
*Healthcare provision
*Shakiness of provision of basic state services
• We see a very drastic shift away from the classical political division (center-left).
-Things are out of whack, they are not the way they should be…

Jan: When recoding, you don’t need to read the text again, you will have the instructions. It is a pretty mechanical work. Eg: an old code a will be assigned to b (in the new spreadsheet).
-The whole bunch of old xs exists in new xs…some are new and some will be proposed to be merged or to change the names.

Wojtek (in the comments section)
a) We won’t be distracted as easily this time - we have our research question, major categories, the whole conceptual framework. We kinda know what we are looking for, though this was not our initial approach.
b) we should remember what these texts are about (I do)
c) (partly due to a) there are fewer codes to be applied
Therefore it coding/recoding the old material may not be as time-consuming as it may seem.

Wojt
-Phase 1: finishing the codebook
-Phase 2: introducing the codes into the backend, before we start coding the new material
-Me and Jan will prepare a training for the new coding and then prepare a test of coding. A good way of developing a knowledge of what we already have and how to be confident with it.

Zdenek:
Since Jan and Wojtek are doing revisions of the codebook, me, Amelia and Richard (+ M+J+D?) should do the check of Jirka’s thin verion. Once J+W are done with some other Z category, they will let us know and we will chceck that cathegory. Right?

Jan: If you have an idea for a new code, you add it to some spreadsheet we will set up and explain why you are suggesting it so other coders are aware of it and can approve it.

Jirka: now we have so much theory and methodology so you really must defend your new code suggestions. Having some kind of hierarchy of who can pass these decisions.
-Also we must keep the two versions of the codes in the categories(thick and thin), so we understand the process behind it.
Wojtek: it makes sense to try to make them as uniform as possible.

The next steps (sumup)

@jitka.kralova Many thanks - you are a marvelous note taker, Jitka! It is truly helpful. Have a great weekend.