I have a dream: To build an indoor constructed ecosystem that can produce Bio-ethanol from micro-algae, Shrimp, edible fish, edible plants and fish feed, with the only input being household greywater and electricity. Greywater is the waste water directed in separate pipes to the water treatment plants coming from such things like: washing machines, showers, dish washing machines etc. This greywater contains plant nutrients found in soaps and detergents which can be recycled and and used to cultivate microalgae. This microalgae is the primary producer in this proposed ecosystem. Side note: By cleaning greywater to drinkable quality, we could make use of its plant nutrients while also making it a source of monetary income. Although some further research is required in this area: I think its very possible to do with small means, by using extra steps with sand filtration for example.

Obs! For a visual understanding of this text, see the ugly diagram I’ve included.
Here is an overview of how I imagine the production chain could work: The greywater which contains valuable plant nutrients goes through a stage of filtration by using an oyster and shellfish indoor pond/tank, the nitrogen levels is measured continuously and the water from the pond is let out when an adequate concentration of nutrients is reached. A volume of new greywater is then added to the pond, while an equal volume of filtered water is let out for later use. One portion of the filtered greywater which has been highly reduced in nitrogen becomes the medium where the algae is grown. The algae spices Chlorella Vulgaris develops high concentrations of carbohydrates when grown in a medium with high phosphorus and low nitrogen concentrations. A portion of the algae is harvested to make an ingredient in the fish-feed. Another portion of the algae feed the shrimp directly. The shrimp is used as fish feed ingredient, and can also be harvested for human consumption. We cultivate the fish in a separate tank and collect the fish-excrement and debris from it. The debris can be used as shrimp feed. We transform the fish-excrement into plant nutrients by feeding it to bacteria. The Nitrosomonas bacteria metabolize the harmful ammonia in the fish-excrement into nitrite and The Nitrobacter bacteria in turn eats the nitrite which metabolize into nitrate. Now the fish-excrement is safe to use as low concentration plant nutrient suitable for hydroponic cultivation of edible grass and leaf plants. Alfalfa and Barley grass is grown to make fish-feed and also harvested for human consumption. (Salmon loves Alfalfa and Barley) Other edible plants that need low-nutrient concentrations can for example include: Bok Choi, Spinach, Different kinds of herbs, Lettuce.

Next: we harvest another large portion of the algae that goes into making ethanol. First the algae goes though a cold press process, where we break the lipid layer in the algae and expose the starch for faster and more reliable fermentation. Instead of using Hydrochloricacid commonly used to break the sugar bonds in the starch (which is expensive and not environmentally friendly) we instead have a bacteria culture that produce an enzyme (also contained in human saliva) that can do it better. Then we distill the mash, and voila: we have ready fuel from algae that can be used.

Many plants that produce fruits: such as tomatoes can also be grown in a hydroponic setting,
although they generally demand a higher concentration of nutrients. For this reason we can use the greywater that has been filtered by the oysters and shellfish for a shorter period of time, which leaves the filtered greywater with higher concentration of nutrients suitable for this purpose.

To conclude: By combining well established hydroponic and aquaponic practices along with
scientific results from experiments (see selected scientific reference included in the project),
this proposed production facility would produce the outputs from the inputs listed below: 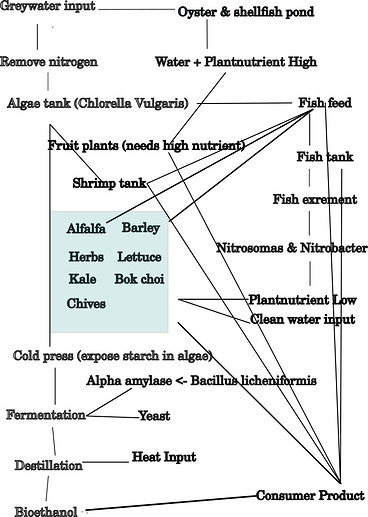 α-Amylase is used in ethanol production to break starches in grains into fermentable sugars. The first step in the production of high-fructose corn syrup is the treatment of cornstarch with α-amylase, which cleaves the long starch polymers into shorter chains of oligosaccharides. An α-amylase called "Termamyl", sourced from Bacillus licheniformis, is also used in some detergents, especially dishwashing and starch-removing detergents. See amylase for more uses of the amylase family in general. ...

Nitrification, the aerobic conversion of ammonia into nitrates, is one of the most important functions in an aquaponic system as it reduces the toxicity of the water for fish, and allows the resulting nitrate compounds to be removed by the plants for nourishment. Ammonia is steadily released into the water through the excreta and gills of fish as a product of their metabolism, but must be filtered out of the water since higher concentrations of ammonia (commonly between 0.5 and 1 ppm)[citatio Bacillus licheniformis is a bacterium commonly found in the soil. It is found on bird feathers, especially chest and back plumage, and most often in ground-dwelling birds (like sparrows) and aquatic species (like ducks). It is a gram-positive, mesophilic bacterium. Its optimal growth temperature is around 50 °C, though it can survive at much higher temperatures. The optimal temperature for enzyme secretion is 37 °C. It can exist in a dormant spore form to resist harsh environments, or in a veg...

this looks very interesting Anders - how can we help?

I like how you have combined established knowledge (hydroponics / aquaponics) and new science to create this process. I’ll just give some random thoughts below how this could be improved.

It seems plausible that this process would work on a large industrial scale, the way you describe it. It would not work on a small scale, since greywater is quite nutrient poor, so you would need a lot of it. The problem is, big industry is not receptive to ideas. They would just not try out a complex new process like this one.

So for the start, I think you would need a way to start small. Here is one: With the algae being the primary producer, the only nutrients needed would be nitrogen and trace elements. Trace elements can be recycled in the process, by utilizing the distillation residue that so far does not have a use in your process. And nitrogen is contained in high concentrations in urine (“yellowwater”). Together, that would make a small scale application possible.

Also to support starting at a smaller scale, probably you want to reduce your process to the essential steps. Every added step or side process will add its own difficulties and will need time to get right. Your essential step seems this one:

The algae species Chlorella Vulgaris develops high concentrations of carbohydrates when grown in a medium with high phosphorus and low nitrogen concentrations.

That is the really interesting step in your process, which I had not been aware of. Ethanol is a much cleaner burning and more versatile fuel than the typical algae-derived oil. For example, I use an ethanol burning kitchen stove (model “Origo 1500”) and it’s working very well. If I could make my own ethanol, even better

Do you know of any plants (pilot scale or industrial scale) that use the Chlorella Vulgaris process for ethanol production already?

As an inspiration for a small-scale algae production plant, this could be good: 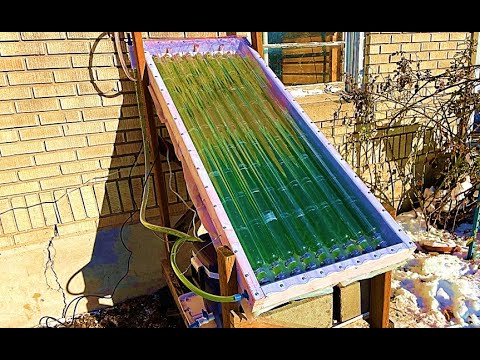 It seems plausible that this process would work on a large industrial scale, the way you describe it. It would not work on a small scale, since greywater is quite nutrient poor, so you would need a lot of it. The problem is, big industry is not receptive to ideas. They would just not try out a complex new process like this one.

Thanks for your input!
Perhaps its better to exchange the greywater for something else.
I do not have the hands on experience in these areas, that I assume you have.
This is just a theoretical sketch. But I feel you get the idea.

The core principle and vision Is this: how to transform waste through a food-web in order to generate new value. It is also a philosophical and political vision, because a constructed ecosystem made by humans proves many ideologies wrong. All this talk about limits is exposed for what it is, man made limits, not natural limits. Its the psychology and competitive dominance culture that is the problem, not overpopulation and scarcity of “resources”.
There is a term in biology, Autopoiesis, for example: cells multiply by making copies of themselves, it means that life in a way possess
self-generating properties.

Do you have any ideas of how to make a small scale solution that would not cost a fortune to build?

I will maybe attend this symposium in may:

Are you currently… …doing your MSc or PhD……a Post Doctoral researcher……an early stage Principal Investigator or researcher in industry……a young entrepreneur……in the seaweed and/or microalgae area? Young algaeneers, this event […]