Session on endangered researchers and precarity in higher education

This session wants to bring together knowledge workers and policy makers in higher ed, also allying with unions and rights defenders, with their histories of mobility, migration and refuge. We would like to discuss and reflect on the intersection between precarious labour conditions and the neoliberal surge on higher education in the last two decades. The best we can do is to come together and learn from each other in order to arrive at a better analysis of the various challenges faced. We would like to exchange experiences and knowledges over struggles for academic freedoms and labour conditions in different contexts. We would like to take the opportunity to learn, exchange and collaborate with/through the framework of critical learning, decent labor and networks of sharing and caring. All participants are invited to zoom in to position the question of labour in academia within broader societal struggles in their own contexts and zoom out to link it up to related struggles in other geographies. As the first step towards concrete action in solidarity, participants are invited to reflect on the following 2 questions:

This list will be updated continuously with the people who are invited and confirm attendance. 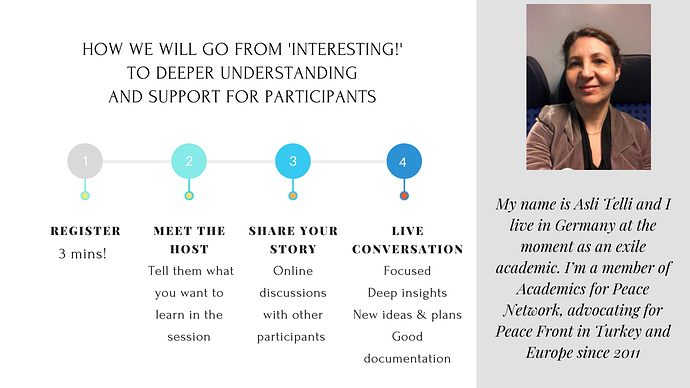 Depending on interest, this could be a series of online meetings to get prepared. Then a moderated discussion with speakers from diff initiatives/institutions/responsibilities that could address the issue from diverse perspectives. This would rather be an online workshop model that brings together knowledge and experience to form collaborations and multiply impact.

Ahead of the event, take some time to go through the materials below. We summarize them and link to the full resource:

***Dissent in European (and beyond) higher education***

How do we engage with online learning beyond the logistics, operations, and mechanics of digitization? A 9 session webinar hosted by ArtEZ.

dear interested @edgeryders! note that this is a draft that is open to discussion. any thoughts, suggestions on names and content are welcome. excited to be a part of the online summit in these trying times. hope to expand the conversation here, all best- Asli

The Facebook event is up! Asli, add me on fb please (Noemi Salantiu) so I can make you a co-host and you can make changes? Also, let me know in private msg if you need me to make modifications to the banner.

@amelia @Jirka_Kocian @MariaAlinaAsavei do you know anyone studying this topic who would be interested to join?

@atelli have a look at this new organisation mentioned by @shajara: http://academicmentalhealth.com/
I propose we invite them to join, some of the members might have a focused interest on mental health and precarity,

Hi @atelli if there is interest in having someone from the Global Consortium for Academic Mental Health join this session I can post directly in the slack group, and connect you with whoever might be interested & available!

Excited to see such an important topic getting covered!

Yes, let’s join forces dear @shajara. Mental health is a topic of priority, not well-tackled in our community. Sharing on slack is a good idea and how about yourself? Would you be available to join as well? Thanks @noemi for connecting:)

@atelli I’d be happy to join! I also sent out a message to the consortium and will update with what they come back with!

I have further plans in mind on academic mental health community and how we could work together on training, P2P mentoring and the like. Already checked your website:) Once you receive feedback from the slack group, I’d like to get in touch with you and possibly other interested fellows in your community. Thanks and glad to have you join:)

Hi! Few words on what I could share with you from my previous and actual experience in academia:

Concerning the WORK CONDITIONS in academia:

I would be happy to discuss these issues with you.
Cristina Del Biaggio

welcome @cdb77:) just emailed you on the process while you were posting here. nice coincidence! I think starting from refugee students problems and concerns is a good idea. With focus on “Horizon académique” , we can open such a window. Your other suggestions are also very relevant. It would also be worthwhile to have policy maker/practitioner/rapporteur working in the field of knowledge labor and higher education in the conversation. Just ping me @everyone if you have any ideas or connections in that regard.

Looking at your mission and participants, my 10 years on the faculty at 3 institutions in the United States may not be useful. But I’m interested in the discussion and let me know if I can help.

Either way, I have registered to attend.

Dear @schmudde, happy to hear you are interested in the session. Checked your website, you have an interdisciplinary take on ICT, art and knowledge systems and plenty of international experience in higher education. We will definitely gain a lot from your experience and insight into new precarities and pressure on critical thinking as well is diversity. Welcome:) We’ll stay in touch and hopefully expand from here. Thanks:)

Great. Thanks for taking the time! I’m looking forward to the discussion.

I’ll add one other dimension to consider: conferences. I believe conferences have been vital to the exchange of ideas in academia for centuries (I use the term academia literally as I use the word conference loosely).

I have always enjoyed conferences even while recognizing that they are generally exclusionary and the requisite travel is part of the climate problem.

The pandemic has already had a tremendous impact here. Organizers are not only scrambling to create a digital proxy, but also attempting to define the value of a conference in digital space. In my experience, registration prices have largely been waived in this transition period - a welcome change for an independent researcher like myself; I rarely have rarely had institutional support.

These meetings have been greener as well. Conversely, the social aspect has been far less gratifying.

Hi everyone! Just quickly introducing myself - I’m Rebecca, and I work in HE in the UK. (I also worked with Edgeryders back in the beginning, on The Edgeryders Guide to the Future.) There are so many important dimensions to the topic of precarity in HE; I’m particularly interested in how HE systems entrench inequalities at all levels, including access to education for certain categories of student. I’m also interested in what kinds of knowledge become lost as HE sheds expertise. Look forward to the discussion!

Hi Rebecca. Nice to catch you here with your worthwhile questions:) Would you be interested in presenting a blurb of these concerns during the session, say in a 5 mn talk? I’m putting together a draft schedule, rather felexibly structured, to gain the most out of a couple of hours. Just let me know here or via email if you’d be interested in a more active participation. I`d be glad if you would!

Hi @atelli. Sure, I’d be happy to speak for a few minutes on these specific points, if it would be helpful.

Great. I’ll forward you the draft schedule and ask for a short bio via email. Thanks very much for your support and interest:)

Hello @rebecca, great to see you again on Edgeryders.

I have no expertise of my own to contribute. What I do have is some personal memories that stretch back quite a bit, as I am fairly old. So, I remember the other side of this debate when I was an undergraduate student, back in the late 1980s. People then looked at academics, and found a lot of entrenchment. Once hired, academics were unfireable. The top layer of researchers stayed mobile, moving from one prestigious university to the next in order to find new stimuli and new collaborators; but, if you were a student in a peripheral university in, say Italy (Camerino? Bari?), chances were, your teachers had been in the same department for 10-25 years, and they would teach you what they saw fit to teach, with no accountability whatsoever. You just had to hope that they would be fairly up-to-date, reliable at office hours, reasonably interested in talking to you. If not, tough luck. Especially the senior ones were really entrenched. People called them “baroni”, the barons. And since you got in there by co-optation, getting a job as a professor was very much about swearing fealty to one of these academic feudal lords. They would get you a job (very eventually) by making a deal with fellow barons: I upvote your flunkie in the competition, you upvote mine. The system was felt to be rotten and overdue for some disruption. This is the only reason why I myself, after taking a good look, decided not to go into academia. My friends that did become professors (in economics), they all had to migrate, get to somewhere where academic jobs were more contendible, acquire some leverage, then go back to Italy (and still do deals).

American unis, the lore went, did not do things like this. They encouraged their people to not stay longer than five years, then go look for someone else to play with. This would re-align all sorts of incentives. We should imitate them.

And people did, or tried to, but of course they could not really dislodge the barons (rectors, deans, heads of department etc.). So what they did was the easy thing: precarize the lower tier of the academic job market. Then reformers appear to have lost interest and moved on.

Not sure what we can learn from these stories. Maybe my point is that the older generation abused its privilege, and earned a pushback that of course affected others. And maybe another point is that, when reforming, you should really really pause and think about rebound and other second-order effects.

Hi Cristina,
I was re-reading this whole thread in preparation for the session - and the fact that you called yourself a precarious scholar drew my attention: from what perspective did you feel like this? a socio-economic datum I believe…
Thank you, looking forward to meet you next week,
Noemi

Hi Alberto! Good to see you again, too! I think that the system that I see now - certainly in the UK, I’m less well placed to comment on other systems - is somewhere between the two extremes you describe. There are still a lot of established people at the top who often act as ‘kingmakers’ (with apologies for the gendered term, although issues of gender inequality are very pertinent to this debate) - if they’re your PhD external examiner or your post-doc supervisor, they’re in a position to help you into a permanent position and grant you the holy grail of stability (relatively speaking). (No-one wants to admit this, but I see it, including amongst scholars who are otherwise pretty ‘right on’ in terms of the academic identity they externally perform.) Without a ‘kingmaker’ or other ‘patron’ (or ‘baron’), you’re on your own. Some will make it (and there’s a separate discussion to be had about the social and economic circumstances of those who do make it…), but most won’t. One argument would be to simply say, well, tough, gaining a PhD doesn’t entitle you to an academic career. And that’s true, but there are bigger issues here related to the knowledge that is produced by early career scholars that is then either lost (because they don’t have the resource to get it published or otherwise into the public domain) or it is appropriated by others higher up the food chain (a bigger problem in the sciences than the social sciences/humanities). There a huge ethical issues here to do with knowledge appropriation, knowledge loss, as well as the socio-economic inequalities that are perpetuated by a system where it is literally still who you know and/or how well connected you are that determines whether or not you’ll get a job.