The groups that we formed on societal problems you all want to address are:

As discussed at the end of the communication workshop just now:

DOCUMENTATION OF PROCESSES (each group):
Note these in a comment below with your group name. 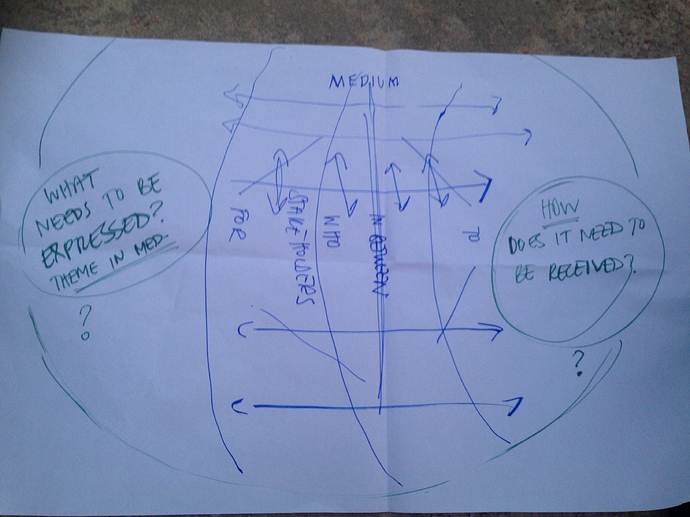 EXERCISE TO CONTINUE (each person):
Please share a one sentence response to the following three guiding questions. These are to support clarifying your projects and their communications. We will collectively reflect on them and discuss tomorrow. Do not worry if it’s not clear - this is simply a reflection process to start moving towards your projects taking shape!

Any questions feel free to post here and we can collectively respond as per today’s workshop.

An absolute joy to share in this with you. À demain!

Here goes from my group, if someone else sees this please fill in - edit this wiki comment or post a comment as a reply to this!

What needs to be expressed?
What are the available tools which young people can use to be entrepreneurs?

How does that need to be received?
Who can help by providing such tool?

What needs to be expressed? “As an entrepreneur, what skills are you looking for in employees, and what conditions of work are you providing them with?”

How does that need to be received? As “How can we become entrepreneurs in Medenine?”

(For somebody else to contribute

This is a wiki post, so anyone from our group can just go and edit it.)

So as for keywords, i think that " entrepreneurship " , " opportunities " and " potentials " should do the job .

Wow !! such amazing task that i do appreciate it so much !!
So, i’m in charge of the group dealing with the topic of Mentality issues here in Medenine.

the needs of divorced woman who suffered a lot from humilation and descrimination in a male community.

We could also talk about the disrespect of working women who have been harassed morally or sexually.

In fact, the main idea is to give chance to women, here in Medenine to express their freedom in the right way and accept the fact that she worths more than we thought.

In fact, divorce at the request of one of the spouses constitutes the largest number of dissolution of marriage in Tunisia with 7256 judgments pronounced. The divorce follows by mutual consent with 6241 judgments against 5793 in 2014. By consent divorce for injury recorded the highest rate with 1485 cases (1350 in 2016) saying 41 cases of divorce daily.

Also we can add violence against women has been increased from 2011 to 2016, statistics shows that 7 out of 10 women have suffered the harassment and violence. it’s shocking and we must take action against these problems.

We’re talking especially for the femal gender and how to establish a new vision about her in our community and the future of the children in-between, boys or girls are equal ant to all the citizens here in Medenine.

A huge effort is awaiting us to change this mentality, here in Medenine.
we could develop a whole programme to teach the children at school, how to avoid violence and harassment against women.

We’d like also to work with the present associations to sensiblize people about this big problem.
And finally, making some projects for women who suffred from descrimination and try to help them psychologically and financially.

What is / are your key message(s)?

Our key message is about accepting all kind of difference and to live peacefully with each other.

@Elyes Pas de soucis! Feel free to ask someone to fill you in and/or let’s take a moment tomorrow morning and I can share the steps we went through today, including the morning workshop by @noemi and @matthias on Edgeryders. Looking forward to having you with us

We thought as a group that it is better to ask the question why concerning the topic of communication because “why” would tackle directly a particular personal perception or position in front of that problematic so the question is the following: “Why do you think that communication is not functional?”

The question in here can be the following: “How would you benefit from improving communication?”

As communication problematic is a quite popular one the very first stakeholders would be the normal citizens in general, then we can make things more practical, so to mention:

My question for you my friend @Nidhal is How to convince the other partner of communication ? which tools and skills we need to succeed this task ???

Good work everyone! Reading you from Stockholm.

Question for @Nidhal. I do not quite understand what it is you are trying to communicate. Can you explain? Use French or Arabic if that is easier: the most important readers of this documentation post are the people who were at the SIC Medenine, and I guess English is a third language for most of you.

It’s quite okay with english @alberto…
Communication is a radical problematic in here in Medenine, and as I told @anique.yael in the workshop with here that we have ideas, thoughts, creativity and most of all potential, but we don’t share them together in order to convert them into initiatives and actions. So, as a first step, I have meant, by communication, sharing and connecting ideas together rather then communication or conveying a particular message. That’s how, I think, we can learn and use the basics of communication so that we can, in a second step, get used to convey what we want to communicate and handle the initiative whenever we are ready to…

So with you @Nidhal! This is exactly why we decided to focus the second art of communication session on tools that can turn ideas into action.

Speaking of, you all asked me to follow up the workshop with the tools we covered and an outline for a communications plan. So here you are with

. For example, approach local real-estate owners to get a lease, connect with womens’ groups in rural areas etc.
*4. After 5-10 minutes they hand this paper onto the person next to them. This person then writes the news story that would be aired once the project launches and is a success. This is a bit of fun and gives people a sense of what it would be like if the project actually happened. The groups then all share their news stories at the end.

Here are two different outlines that might assist you in coming up with a communications plan. They are what I’ve come up with based on my experiences and I encourage you to do more research to develop one that will work for you.

It has been an honour and a pleasure to connect and collaborate with each and all of you. N’hésitez-pas de me demander des quéstions et bien sûr j’ai confiance dans vous tous et je continerai de vous envoyer mon énergie de n’importe où je suis

So how was the camp in Medenine? Some feedback please

@baderdean Check out @noemi’s amazing post and the following comments here. A great insight into how it’s been and is continuing…