Facetime is the thing that makes much of is possible…

Wisdom from Jaron Lanier. Strongly recommended. I agree with his points.
Such as:

I think the fundamental mistake we made is that we set up the wrong financial incentives, and that’s caused us to turn into jerks and screw around with people too much. Way back in the ’80s, we wanted everything to be free because we were hippie socialists. But we also loved entrepreneurs because we loved Steve Jobs. So you wanna be both a socialist and a libertarian at the same time, and it’s absurd. But that’s the kind of absurdity that Silicon Valley culture has to grapple with.

And there’s only one way to merge the two things, which is what we call the advertising model, where everything’s free but you pay for it by selling ads. But then because the technology gets better and better, the computers get bigger and cheaper, there’s more and more data — what started out as advertising morphed into continuous behavior modification on a mass basis, with everyone under surveillance by their devices and receiving calculated stimulus to modify them. So you end up with this mass behavior-modification empire, which is straight out of Philip K. Dick, or from earlier generations, from 1984 .

It’s this thing that we were warned about. It’s this thing that we knew could happen. Norbert Wiener, who coined the term cybernetics , warned about it as a possibility. And despite all the warnings, and despite all of the cautions, we just walked right into it, and we created mass behavior-modification regimes out of our digital networks. We did it out of this desire to be both cool socialists and cool libertarians at the same time. Jaron Lanier Q&A: ‘We Won, and We Turned Into Assholes’

Tech pioneer Jaron Lanier discusses the sinking feeling you get when you’re quoted by Mark Zuckerberg, and everything else bad about the internet.

This says it all… 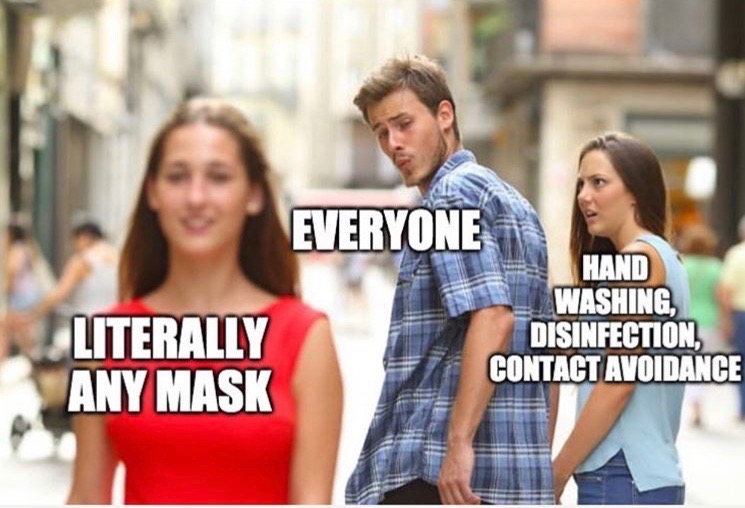 That was no mistake as I understand the word. This was some people winning, and others losing. The ones that won knew what would happen, and did not care.

I agree with you in the case of the true origin of the deep surveillance that is now the M.O. of the big sites. That was after the dot com bust in 2001-2 when Google, newly public, faced deep losses and had to scramble to come up with extra value for their advertisers. It was they who realized that they were sitting on a massive amount of data already, and, crucially, that they could follow people around the web and record their interests and adjust their advertising accordingly. And in service of that they created numerous services requiring log in (mail, docs, etc) so they could follow still closer. This was a conscious decision with watershed bad effects.

I think in Jaron’s case he describes what I remember as the general tone or collective vibe of Silicon Valley at the time. It was still reasonably altruistic overall, even in the midst of various big business plays (such as Yahoo and its competitors, now gone, like Excite and Lycos,which bought Wired) esp those developing real services, as contrasted with the armies of marketers who flooded this area starting in the late 90s. Prior to that time there were far fewer of them and far more just trying to make good services. I was one of them. We did not see the surveillance state coming the way it did with massive public volunteering of personal information…something we would never have considered giving to the government.

This was a conscious decision with watershed bad effects.

It goes deeper than that, John. I am re-reading Mazzucato’s The Value of Everything, and what seems to have happened is this: starting in the late 19thcentury, the idea of “value” was moved from objective (“agricultural production has value, but luxury goods production does not”) to subjective (“anything that people are willing to pay for has value”). This was not an abstract, academic decision, but it was the result of a mighty political crash. But this goes beyond the scope of “what we are up to”, especially in the middle of a pandemic.

Yeah probably so. But that is interesting - I didn’t know that. I do remember my father, a pioneer in the financial planning field, used to always say “something is only as valuable as what someone will pay for it.” He also used to say, “the essence of pricing is people charge whatever they think they can get away with.”

This is the kind of thing that makes me go mad these days… In the end the extent to which states are able to deal with this crisis is very much tied to culture. 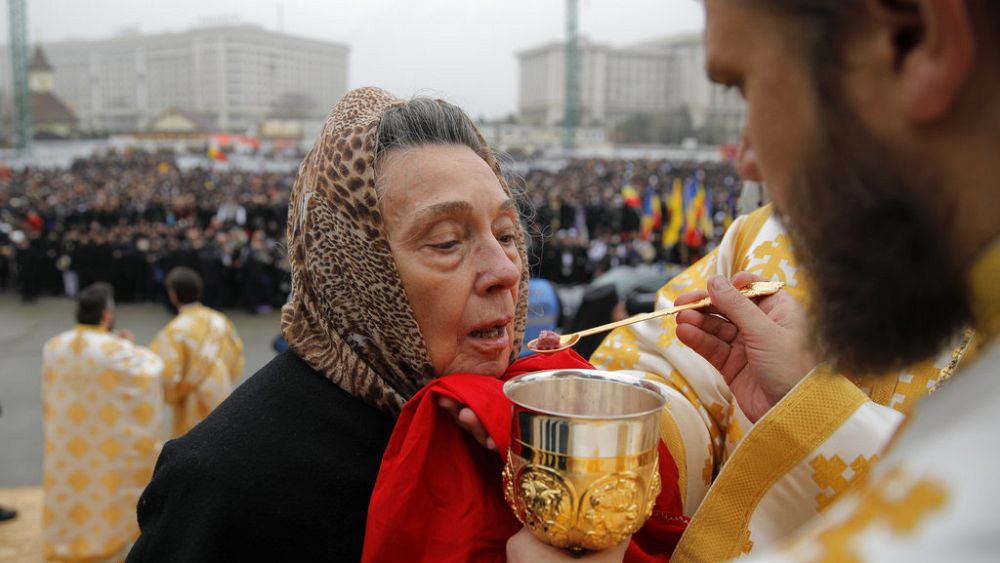 Priests give communion with shared spoon as Romania COVID-19 spreads

The controversy came a day after Romania imposed restrictions to stop the spread of coronavirus in the country.

Just had a call with a parent of 2 children here in Stockholm who told me that he had to decide by himself to keep his children at home against the schools recommendation as schools and compulsory attendance are still ongoing. Some companies have decided by themselves to move to home office 2 weeks ago, all my exhibitions and workshops have been canceled, but there is still no systemic closing of non essential shops and stuff like that. Feels like living in a different reality due to following non-local news. What should I read in Sweden? Why is it still following a different strategy from all other european countries as it seems?

Because it is exceptionalist and feels a bit off the beaten track? Even though Stockholm feels like a true metropol these days (as opposed to the provintial town it was when were kids).

Riffing in my mind about “Sci Fi Economics” and how with this virus we are in it in real time. This unseen danger lurking on every surface and breath reminds me of the 1950s horror movies I used to watch as an almost steady diet. The ones like “The Blob”, “The Fog”, “Invasion of the Body Snatchers” - all that. Not to mention “The Day the Earth Stood Still.” At the same time economies are collapsing into an unknown. What will be the status quo in say a year from now?

My new strategy for dealing with the whole situation is to go for useless but cute (yes yes on top of all the handwashing etc).

It’s the new “never leave the house in ugly underwear”: 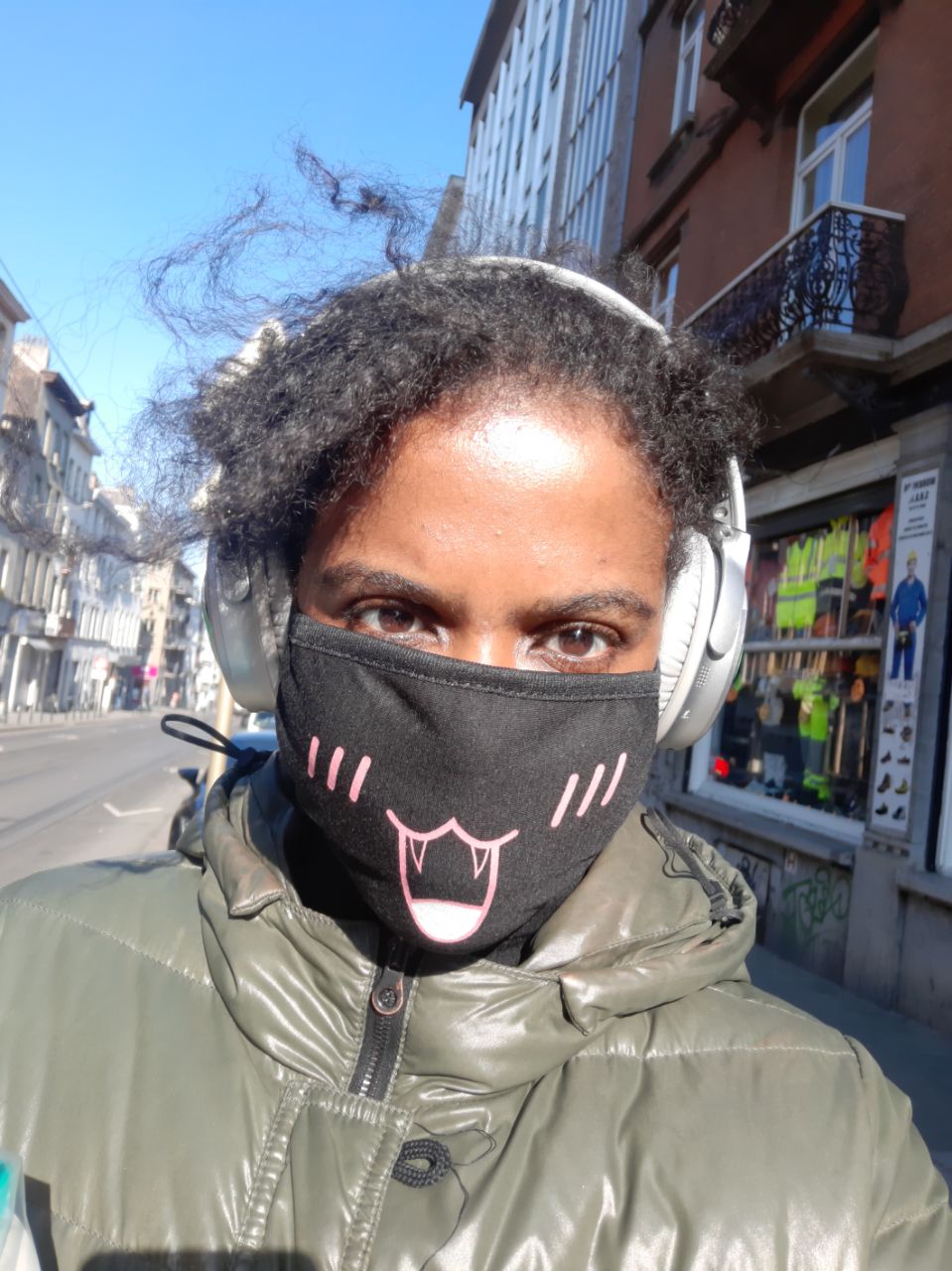 (Nadia: If you have a coffee or glass of water, it’s a good time to put it down

go for useless but cute

As usual, I follow the opposite philosophy in both parts: 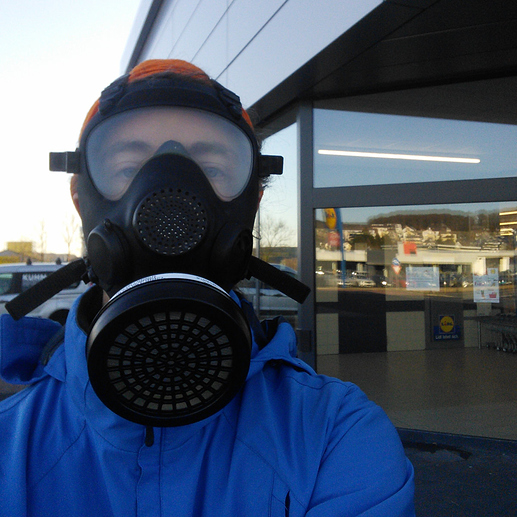 That’s when I went food shopping for my parents’ household last Monday at LIDL. People were trying to keep a straight face. Two guys took a picture. The cashier said: nobody’s gonna believe me when I tell them.

(This respirator is not something lacking in hospitals. It is hacked together from old military gear that was sold as a decorative item. Hospitals don’t want these since one cannot wear these comfortably for more than an hour. If hospitals would want these, they can get tens or hundreds of thousands of new ones from the military.)

Pleeeeese can you put asid two of them for me if you ever come across them again? There’s a delicious meal in it for you (Nepalese). Just seeing my sister’s face when I pop in the door wearing it would make my year. Plus if a friend and I wear while out walking we could cause quite the ruckus. SO WORTH IT.