Work in the Time of Corona Virus

We can implement this fairly quickly, if it means access to rooms via user ID. I’ll see what I can do today. The other priority is to improve the chat (basic notifications and platform export).

I propose you can use the Discourse groups feature for that. During the login process, you get notified about the group membership of users on communities.edgeryders.eu. Then there could be one video call room for each such group. 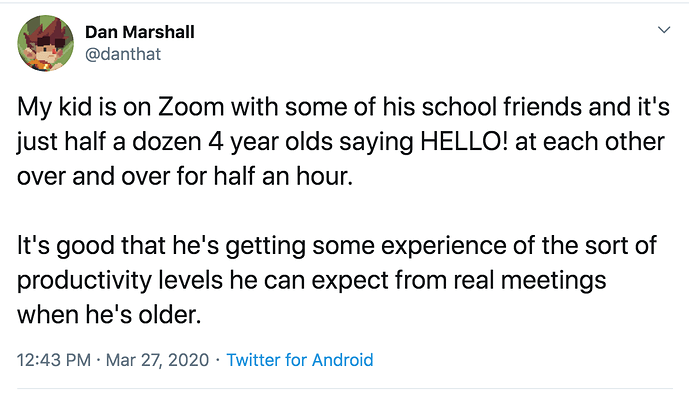 The endless stream of video chats, on zoom no less - leakers of private information and forwarders of racist blog posts.

Am finding a significant chunk of my days sitting through the one call after the other.
Today someone tried to push for yet another loooooooooooong meeting on zoom (over 4hrs, in a row). Like, NO.

From the LA Times:
More than a third of the country’s vegetables and two-thirds of its fruits and nuts are grown in California. Shelter-in-place orders in California exempt the estimated 420,000 farmworkers as essential employees. But many are undocumented, lack health insurance and don’t qualify for unemployment insurance or federal COVID-19 relief.

For workers on the Central Coast, this could be the worst possible time to face a health crisis. With peak strawberry season next month, pay switches from hourly to piece rate, and pickers are incentivized to work hard and fast. And as one farmworker advocate says, “You can’t pick strawberries over Zoom.”

In the USA as of today ten million jobs lost. In 2 weeks. Before last week the record for people filing for unemployment insurance was 695,000. Last week there were 6.6 million.

I would like to also raise the issue of people experiencing a lack of self-worth or guilt due to not feeling like they are able to contribute enough. Of course the existential thread of lacking the means to finance yourself is much more pressing, but even those who are in steady and not at all endangered jobs but now are either unable to do their work or have to work differently from home have very emotional reactions to that.

A friend of mine told me yesterday that she felt guilty in the first week of working from home because she felt like not working enough. Because processes are different and she would have waiting times or short stops while being at home she felt guilty. She is now using some of her overtime to shorten her hours while working from home to alleviate that feeling.
In a group with some other friends the question was carefully raised by another how they feel the amount of work they get done compares to what they usually get done. Obviously also inspired by the fear of not being able to get done enough in this form of work. The same person had just moments before told about how she was exhausted after working from a screen for 7 hours.

I think we also have to discuss the loss of self value perception as is still connected to work in our society.

My mother is in early retirement for about 2 years now due to many health issues. Her 5 siblings have been making her feel guilty about that for most of it. She lives a very low cost live on the countryside and can come by with her retirement amount and does some volunteer work to stay busy. Yet I am sure quite often she still feels guilty to not continue working a badly paid shift job in the health sector that would hurt her health even more. Because “one has to work”. The perceived default state of a human being is “working”. And for some reason volunteer work or social and emotional work are never counted in this way. If you are not officially working in a classical sense, you are not contributing in the mind of many…and especially in the mind of many themselves.
I have come to believe that people are most judgemental towards themselves in this way. That friend of mine who felt guilty about the perceived “not proper work” during her home-office would never question the “realness” of my work, which is often a collection of odd jobs and art projects, and more often than not in a “home” or distributed office somewhere. But for herself she would not give herself the “freedom” she gives me. And when I was searching for a “proper job” for an extended time after my masters degree while for the first time being unable to call myself a student the feeling of “not contributing enough” also drove me into a depressed state. I am trying actively to free myself from such “proper job” value assertions now. People can contribute in many many different ways and value of a human being should not even been connected to that.

I would never judge my friends for not having"proper jobs" and not contributing. I know my friends, I know they are wonderful people and that they make the world better by being in it. And I want to give the same to myself. It is sad that my mothers siblings can not give that to her, but maybe we can try to make each new generation a bit less dependent on these harmful connection between self-worth and work.

We need to address and try to change this intrinsic (self)value attribution that is still so much connected to classical work models, which are increasingly going away either way.

Are you, or have you heard from people who are now, even so they technically still have “work” but different work that they do not perceive as “propper” in the same way, suffering from self value issues?

A friend of mine told me yesterday that she felt guilty in the first week of working from home because she felt like not working enough [… Another] person had just moments before told about how she was exhausted after working from a screen for 7 hours.

Some of that is just a misperception. If I remember the numbers correctly, in management science, they calculate with 15-25% of non-productive but still paid employee time for on-site jobs, depending on the type of position and work. It’s for stuff like toilet breaks, coffee machine chats, waiting for a meeting to start etc… People are often not aware of this when switching to home office work and try to clock full eight hours of screen work per day. That’s especially true when they do detailed time tracking with software, because then even the smallest breaks are excluded. Instead, 8 h × 80% = 6:24 h of screen worktime per day would be a rough equivalent of 8 hours at the office.

(I guess this should also go into the Distributed Collaboration Manual …)

There is a meme going around in US culture that says “stop trying to be productive.” Good advice.

I was thinking that if anyone is not losing from this crisis that would be the food industry - of course, those non-automated facilities and laborers might suffer due to some restrictions

FMCG is never going to get impacted even if there is a war, they will always be in the front, when it comes to demand…

true… it is mental construct.
Just like you cannot imagine snow-boarding in desert, but realise that sand-boarding is still possible…
our mental faculties have separate class objects for ‘work’ and ‘non-work’
it is just boundary drawn to separate concerns… but that doesnt mean one class cannot hold ? accommodate the value set of other

the moment people will adapt to work-from-home, it will be difficult for them for initial few days , , to work at the actual work places (when situation becomes normal)

I’m Noemi, Brussels based, with family in Eastern Europe.
Where are you based? Are you an online worker yourself?
Any pointers would help, makes it easier to connect you with others- and feel free to introduce yourself at length in one of the places on the platform -
Campfire is a good one to start!

Here is a bit from a newsletter I get weekly from a prominent silicon valley VC guy, about Zoom:

Zoom has gone from 10m to 200m daily users in the past few weeks (!), and that comes with pain. On one hand, since it was designed for the enterprise it wasn’t hardened against abuse, so ‘Zoom-bombing’ (eg crashing random open group calls and putting obscene things onto everyone’s screen) is now a thing. On the other hand, it’s now getting a lot more privacy and security scrutiny, and some… issues have come up. These are two sides of the same coin: you have to ask ‘what would malicious people do with our software?’ and the answer might be both human engineering and software engineering. A lot of the flaws people found look like simple product decisions to make installing and using easier - for example, it used the Facebook SDK so you could log-in with Facebook, but that sends some device data to Facebook. But it also claimed it was end-to-end encrypted and isn’t, and some of the traffic goes through Chinese servers, and so one has to assume that the Chinese state could listen in to anything if it wanted to. To its credit, Zoom has responded pretty well to most of these concerns, and some of this can be over-played (it seems pretty silly for a school system to ban it in case the Chinese intelligence agencies are listening to drama class), but I’m not sure the UK cabinet should carry on using this.

Stepping back, it’s striking that Zoom has made such a big impact despite every tech giant having a big mature product in this space (or even several - how many of these apps does Google have? That would be a good interview question). It’s really not as hard to displace these companies as some would think, if you can find the right wedge. This also reminds me of the founding legend of Dropbox: everyone told Drew Houston ‘there are dozens of these’ and he said ‘yes, but do you use any of them?’

While Zoom scrambles to fix its flaws, we have to exercise some caution when using the popular videoconferencing service.

Because “one has to work”. The perceived default state of a human being is “working”. And for some reason volunteer work or social and emotional work are never counted in this way. If you are not officially working in a classical sense, you are not contributing in the mind of many…and especially in the mind of many themselves.

This is a classic Edgeryders theme. A lot of people in this community have been quite vocal about vouching for leisure as a value in and of itself, and especially in distinguishing “doing the work” (good) and “having a job” (meh).

You could tell your mother to read David Graeber’s seminal Bullshit Jobs. The intuition is that, with some exceptions (doctors are the most obvious one) our economy tends to underpay important work, that needs to be done for society to function properly (example: collective garbage). with respect to unimportant work, that could stop tomorrow with no consequences (or even positive consequences) for society (example: stock market traders).

@MariaEuler maybe this book will give you an idea of the many emotional aspects that are claimed by our work and which often go unaccounted for. It really helped me regulate the ‘self’ that is built as a working person and draw the line between that and other personal aspirations. Highly recommended :

The Managed Heart: Commercialization of Human Feeling, by Arlie Russell Hochschild, was first published in 1983. A 20th Anniversary edition with a new afterword added by the author was published in 2003. It was reissued in 2012 with a new preface. It has been translated into German (Campus Press), Chinese (Laureate Books, Taipei, Taiwan), Japanese (Sekai Shisosha, Kyoto, Japan), Polish (Polish Scientific Publishers PWN), and French (La Découverte, 2017). Hochschild's text is seminal and schol

Thank you for the reading recommendations Alberto and Noemi! Will check it out!