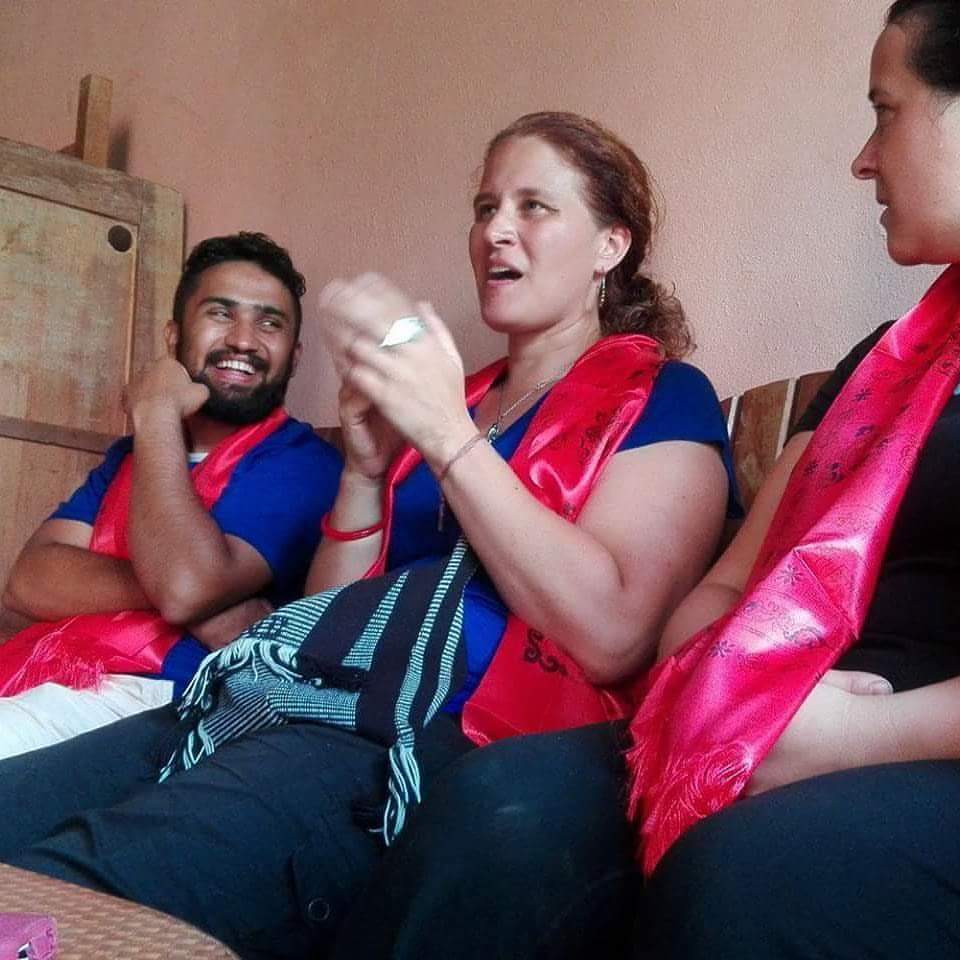 Bibek is a natural entertainer and he easily became the center of the youth event - talkative, funny, energetic, kind of restless. I can imagine that all of these features, combined with passion and drive for change, made his little crazy project such a success in his hometown in Lamjung in Nepal.

He was 24, studying in India, when he was on the phone that Saturday morning, which ended abruptly after his friend said something is shaking. His friend went silent, he learnt about the earthquake, and for three days tried to contact his relatives with no success. The third day someone picked up the call and his family was safe and sound, even if the situation in the village was miserable: houses in rubble, food supplies lost, no help coming through. His project started with contacting friends in India and the US and fundraising - with the main help of Natasha, who used to work as a scholar in Nepal back in the 90-ties and stayed in touch with Bibek and his family. They shortly collected 100,000 indian rupees and while visiting the villages in Gorkha, Sindupalchowk and other hard hit areas, he came up with the perfect use for these and the future fundings: young people will rebuild the villages.

Bibek is a social scientist, but he has guts to drive it - he researched low cost housing, contacted his friends, used his network and begged whomever he met to help and get involved. As the money to the Fundforlamjung.org website started flowing, the initial plan to build temporary shelter was replaced by permanent constructions that can stand earthquakes up to 9 degrees. It was the first such project in Nepal after the disaster. It grew organically - now Bibek has a global family of supporters and collaborators, who regularly contribute to the cause and continue rebuilding Nepal. So far they have finished 16 houses (with the first one being completed in April 2016!) and their operations are expanding to other regions with more than just homes. One of the villages they are working on will be a holistic and spiritual village, attractive to fans of yoga, meditation, etc., a place where both locals and tourist from Nepal and abroad can recharge and heal. And he plans for more themes: athletic village, cultural one. Bibek wants to imagine far horizons for these new places, with bright, sustainable futures. I believe he has everything it takes to make it possible.

Thank you so much Natalia and edgeryders team for Bringing about my story and also some very interesting and  insipiring story from around the Globe. Its my priviledge to be featured here. Thank you once again for the oppurtunity.

If anyone wants to say get updates of what we are doing : here is the link.

So good to meet you @Bibek_Kumar_Pandit! I’m Noemi, a friend of Natalia’s, based in Romania. We have our own seismic risks with one >7 degrees every 50 years or so. I’ve read your story on the site, as told by Natasha, with great interest. What a proof of having built a global community.

Natalia surely told you about this, but if you would like to connect with other community members in Nepal, there is group here on edgeryders where you can browse their stories, most collected in the aftermath of last year’s earthquake. One of the groups’ approaches to better and more resilient housing was to do education about types of buildings and construction or damage repair requirements. They said “We know there are not any earthquake proof building in the world and not it is pratically applicable. But we will teach people the teachniques to build the earthquake resistant construction” (the full story by @Ranjan_Prajapati) Is this something you do in the construction process or are most volunteers already experts at this Bibek?

That was so kind of you @Noemi,Thank you for your words. Its great pleasure to be part of the community.

Since i was out of internet reach so couldnot respond back on time,anyway i hope you are celebrating the joy of winter and believe not troubled by the snow.

I went to some of the stories in the group of changemakers in Nepal and i found some of the stories very useful for me to reflect on too. I will try contacting the people there if required. Our project is more about building homes, a permanent homes and we have not engaged ourselves in training activities like mason trainings due to limitations of budget and project nature. We do partnerships to build a model community and now we are almost close on finishing one by mid april,2017 and soon we are starting with another village of Tamang people and Majhi(the fishermen community ) in eastern Part of Nepal . Basically we do work through volunteers where volunteers are engaged in work like painting houses,awaring people about Health and Sanitation,helping with data collection or supporting in any way the volunteers wants for like content writing,story writing or anything.

Anyone willing to part of the project by any means is always welcome and i expect to be more enagged with the edgeryders community too,i went to some of the articles and found some of them very interesting. Thank you @Natalia for this connections.

Welcome back, no hurry. Indeed I’m a little bit trouble by snow, but better to have it than not have it

I hope you’re doing well and stay in touch, especially if you could use a global network in your project. Perhaps less related, we also have a small team in Hansapur who have just launched a small coffee export business to support the local economy. Good luck…!