A first look at the POPREBEL social semantic network

@amelia asked me to cast a look at the first version of the POPREBEL Graphryder dashboard with a fresh pair of eyes. Here we go.

First off, this is all very tentative, because looking at the graph generates intuitions, but I cannot verify them because of the bug that prevents reading the full text underpinning the edges (heads up @hugi). This is a severe limitation.

Another massive limitation is that the Detangler view does not work at all (cc @matthias).

There are several connected components. I am ignoring the ones with only two nodes and one edge, too embryonic to build much on. This leaves two small and one giant component.

The smallest >2 nodes components, it seems, is about Poland and organizational arrangements of populism. The other one reflects a more abstract conversation, with codes around gender and participations.

The giant component has a center of mass based on three high-degree nodes: leaving home country, personal change, and bubbles. leaving... connects to codes seeming to represent a rich world view that comes with physical mobility. If I had to make a guess, I would guess that part of the conversation is about how diaspora people see things differently from those who stay behind. Bubbles has the connections you might expect for a conversation about echo chambers, including the revealing value mismatch. I find most intriguing the connections between personal change, leaving home country, encountering difference and feeling at home. Pretty clear what is going on here with the diaspora anti-populists.

In the same region of the graph, we encounter what looks a relevant group of codes around values mismatch. 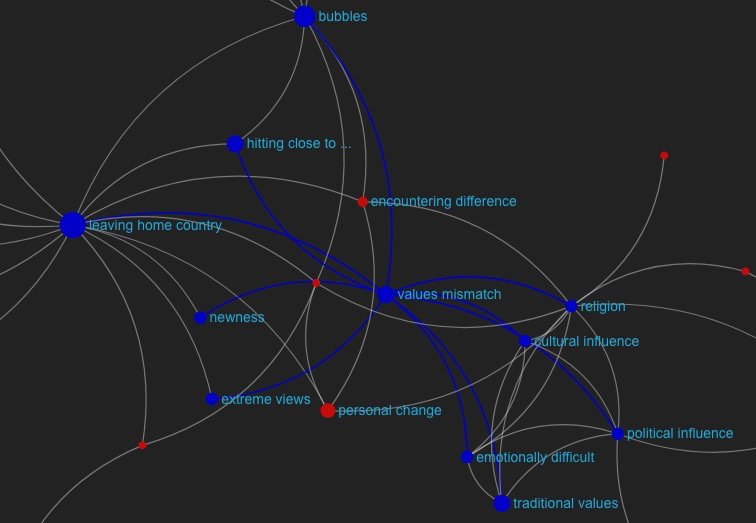 On one side of this there are leaving home country, and the codes of modernity like personal change. On the other, the codes of tradition like religion and traditional values. We can infer that the conversation contains accounts of the conflict between the two sides, as it plays out in the political and media landscapes (cultural and political influence) and in the self (emotionally difficult and of course values mismatch itself). Moving further away from the codes of modernity, we seem to find a more theoretical part of the conversation, centered on moral code and composed mostly of codes representing abstractions.

When “filtering in” only codes co-occurring three or more times, we are left with a graph with only 15 nodes and 9 edges.

However, the macrostructure of codes of modernity (associated to leaving home country) connecting to codes of tradition via values mismatch is still recognizable. If I were to venture a guess, I would argue that this is a promising avenue for analysis, and we should try to examine in depth the evidence we already have for how this contrast plays out in people’s lives, and elicit more.

For some reason that I still do not understand, everything works as expected on the OpenCare version when installed on a fresh VPS, but not on the setup on our server. My recommendation has been to go with one VPS per project.

At first look, we know on which threads these conversations are based on (mine, @jasen_lakic, @pwawrzynczyk…).
I would be great if we could do a validation at each country level- for example there are many stories by the Polish community which most of us could not read due to the language issues, so it’s hard to contextualize there. Perhaps @Jan could look more in depth into this, and each country team? I would expect some interesting nuances.
True, it’s early days, but looking forward!

Given my personal research interests, the fact that migration (leaving home country) and gender are key issues emerging from the data is very exciting!

PS: I have found a good Czech Research Assistant with a lot of discourse analysis experience. (He used to teach it.) Once Charles University confirms that he is officially on the books, I will put him in touch with Jirka, who can show him how to code the Edgeryders data. We’ve agreed that 20% of his time will be spent helping Jirka code the Czech data.

Yes it would be very interesting to see it for each community. I think it is still too early to do validation for Serbia as more data is needed, larger community and more stories?

@amelia OK, that was my “fresh pair of eyes” look, with all the data/software limitations. What is your take? Does mine more or less converge with yours? If not, where are the divergences?

Yep! This is very close to my take. I think the most interesting avenue of inquiry here is going to be the anti-populist one: how do people cope with growing populist sentiments? There’s a generative tension between encountering difference (which happens via leaving one’s home country, and leads to personal change) and the unpleasantness of encountering a values mismatch (tied to traditional values, so indicating a tension between traditional values and changing values). I’m interested in how people cope – do they opt-out and create bubbles (therefore sheltering themselves from encountering difference, good or bad) or do they try and engage? What are the strengths and weaknesses of each?

Personally, I am more interested (because of the results so far) in exploring how people who are anti-populist are creating strategies to cope, fight, or deal with the rise of populism than understanding how populists think – this is the way that the community is talking, at least, and I think it’ll be interesting to follow their struggles. Though, of course, both are important, and other languages might yield the latter (understanding populist sentiment itself)-- I know @Jan is of course interested in this. I also imagine one can arrive at some understandings of the latter by learning more about the former (how anti-populists are dealing) because they have an intimate knowledge of their own situation, what strategies work, and the specificities of populist discourses in their own contexts.

There’s a generative tension between encountering difference (which happens via leaving one’s home country, and leads to personal change) and the unpleasantness of encountering a values mismatch (tied to traditional values, so indicating a tension between traditional values and changing values). I’m interested in how people cope – do they opt-out and create bubbles (therefore sheltering themselves from encountering difference, good or bad) or do they try and engage? What are the strengths and weaknesses of each?

Wow. This is… beautiful.

But what do I know, I’m just a lowly economist. Paging @Jan and @Richard.

There’s a generative tension between encountering difference (which happens via leaving one’s home country, and leads to personal change) and the unpleasantness of encountering a values mismatch (tied to traditional values, so indicating a tension between traditional values and changing values). I’m interested in how people cope – do they opt-out and create bubbles (therefore sheltering themselves from encountering difference, good or bad) or do they try and engage?

Spot on. From what i encountered in Brussels, I would say there is a big difference between communities from different countries. For example, Moroccan and Turkish communities formed bubbles, then slowly opened up by the 2nd generation born here. Specifically in those communities there is a lot of friction between those who came here and 1st or 2nd generation born here. On one side you have their tradition (reinforced even after they came here as they maybe felt endangered and in culture chock) and on the other side you have the new generation, being torn between traditional upbringing and European culture and influence they naturally fall under.
I feel like European immigrants more fall into the rich Brussels common melting pot of cultures

, expand views through exchange of ideas and experiences much faster.

Could be wrong though, it’s just how I see it, after 19 years in Brussels.