A research facility at The Reef: some reflections

After the final Reef workshop at Metrolab, @matthias and I had some fruitful discussions about how climate innovation would work in practice at The Reef. In this post, I try to summarize them roughly, so that we don’t forget them.

The action point is for me to call a meeting in December (ahead of writing the stage 2 proposal) with C-KIC, and for Matt to write two well-explained example of the type of innovations that could be developed in The Reef: emissions-saving, with a technological component and a social component.

We have always though of The Reef as a hybrid space: it is residential, but also commercial. People and small businesses live together, and exploit the resulting economies of scope (the coworking space becomes a great space for parties after 18.00, etc.). We now propose that part of the commercial space is allocated to a university lab on green living. The inspiration comes from Metrolab itself: interdisciplinary, result of the collaboration between two Belgian universities, EU-funded. The advantages:

Matt to write two well-explained example of the type of innovations that could be developed in The Reef: emissions-saving, with a technological component and a social component.

I thought about this a bit more over the last days, and I think I settled on the two innovations already that I want to include: small heated spaces and heated clothing. The descriptions you requested are being developed behind the click …

I think this would be a really good first R&D project for The Reef’s research facility, because:

Science fiction to the rescue: I was reading Utopia Five by A.E. Currie, set in a post-climate catastrophe world. As fossil fuels get banned and the economy scrambles for efficiency, some geek who has read Dune comes up with the idea of building real stillsuits, the utility clothing used in the book on the desert world Arrakis:

Stillsuits were hooded leather bodysuits with a layer of water bladders next to your skin. Making them work in real life required a little more engineering than the original author had envisaged, but collectively we got it working. The suits were more efficient at managing the temperature of a human than warming or cooling a whole building. Just don’t ask where the water in the bladders came from. Actually, in the UK we used the tap. Heating, cooling, and water re-use. All built into leathers. It was local and efficient. We all looked like futuristic biker gang members. I never thought that was a bad thing. 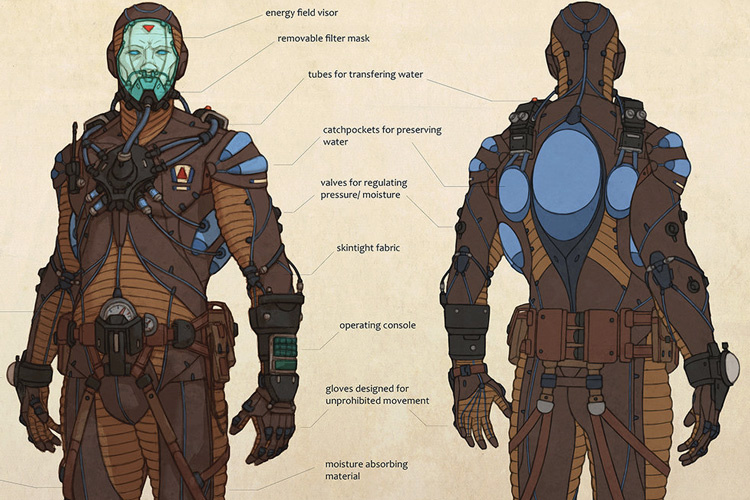 Great that metrolab + workshop 3 were source of such lights !
They got this axis on urban ecology full of researchers that could for sure be part of the reef lab.
I sent an email to Marco Ranzato that shared the keys of the place with workshop 3 summary + ask to spread it to ecological related researchers.

How do people feel about adding an associated rural “campus” to the research facility? Anywhere rural where we can find govt support to get us a place for such a facility … such as via the Italian aree interne programme.

Probably it’s too early to even think about it right now. But it could complement the approach, and I care about the rural / simpler conditions quite a lot … and I’d finally get a proper home base

Not a bad idea. We should write it into the corresponding activity in the proposal.

Does the rural campus need to be in Europe?

As far as I am concerned, not at all. I would welcome this to be in Tunisia, for example

Not sure if either C-KIC or European universities can funnel funding to a research campus outside the EU, though. As these are the funding sources we envisage right now.