"A Taste of Home" or the use of public spaces

How can we help newcomers to use public spaces to their full extent, because they do not know what activities are legal in these spaces and are afraid to act against the law?

This is the design challenge we want to solve during the on-going term or lets just say face at the moment. It came up to us through some interviews we and friends conducted in the last weeks with refugees or other newcomers in Berlin. What are your thoughts on this?

To make it easier for everyone interested to follow I will try to sum up the thoughts we had and the experiences we made recently.

Starting with the question “How can food help people on the move to feel at home wherever they are at the moment?” amongst others we got to talk to a 24 year old guy from Syria and a girl from Korea about the same age. One had to flee home and the other moved for love.

Some of the most remarkable insights we got are about food some are not. Two I want to share because they add to our design question.

The guy misses the Syrian nights where as he tells everyone takes their coaches and pillows outside, drinks tea, smokes, chats and just sleeps on the streets. Maybe this does not happen in big towns he says but in villages as in smaller or medium-sized towns it does.

The girl told us that she is missing the Korean street food a lot. Once she tried out a Korean street food market here in Berlin, but did not like it. She went there with some friends, to chat, meet new people and have some good Korean food but it ended up being too expensive, there was even an entrance fee and the food was just not good. In Korea she always used to eat outside with her friends. Cooking was a family thing; eating out was for all other social events.

After those interviews we talked about the “Berlin Thaipark”, were mostly Thai women sell homemade southeast Asian dishes on their blankets more or less being tolerated by the bureaucracy; about a great project by the New York based designer Candy Chang called Street vendor guide where she visualizes the most commonly violated rules in this context for the vendors themselves; and asked ourselves: How can we enable migrants to integrate the interactive food customs / traditions they like and bring from their culture of origin into Berlins community life?

Later on one of our fellow students told us the following:

A group of Syrian refugees mentioned the huge summer barbecues they would always have in summertime back in Syria: a lot of friends, family, a lot of food, somewhere in the nature, in a park. When being asked if they are doing similar activities here in summertime they deny. They think that it is forbidden to have a barbecue anywhere outside and do not want to act against the law seen their uncertain status. Still they miss them.

That basically is how we ended up facing the design question already mentioned above: How can we help newcomers to use public spaces to their full extent, because they do not know what activities are legal in these spaces and are afraid to act against the law?

So far we, a group of 4 university students, call our little project A Taste of Home and would be more than happy about any comments.

Hello Edgeryders!
Experimental cooking with a minimum of utensils
About the Migration category
What are the expectations about the use of public spaces when it comes to cooking on the street?
Food security includes the opportunity to cook
alberto July 31, 2017, 6:38pm #2

Well done, @Luisa and all. I like how you narrowed a generic problem down to a specific one (integrate the interactive food customs / traditions).

It may be harder than just writing a step-by-step guide to starting a street food activity and translating it into several languages. I do not know Germany well, but in Italy the regulatory landscape is a lot tighter than what seems to go for Asian markets (eg Thailand). The moment you start serving food to the public, you need to comply with licensing, safety, hygiene regulations. Additionally, many market operate a fixed number of stalls: you cannot just add a food cart as you would in other parts of the world. All of this increases the fixed costs of starting an activity. Every year, as the summer comes and festival season kicks in, the police braces to fight off illegal hawkers (who are, for the most part, just people trying to make a living, many of them migrants). The legal ones are very vocal in demanding that the police shuts down their competitors on fairness grounds (“we have to comply with all these expensive regulations, whereas these guys just go gray economy”).

In passing: within Europe there are already subastantial regulatory differences. I live in Belgium, and here tiny restaurants with toilets in the basements, that you access through narrow and steep stairs, are very common. In Italy they would all be illegal: restaurants need to have wheelchair-friendly facilities, fire exits whose number and width depend on venue capacity, and so on. By my own guesstimate, about half of the restaurants in Brussels would have to shut down if the Italian regulation were ported to Belgium.

So, I guess a first step towards A Taste of Home is mapping out the regulation, and trying to figure out what the minimum investment needed to start a small food related activity would be. Makes sense?

I love this idea, and it would be interesting to see it develope in multiple cities around europe. Berlin is lucky for one part: you have bbq zones a bit everywhere. There can be a lot shared through BBQ and i saw it when i visited Berlin that all kind of social classes use it and make it feel lik, e home. This is important.

Problem for cities in europe is that they aren’t designed to have multifunctional public spaces. It is starting to shift, but it is still a long way to go. in Brussels for exemple you can’t BBQ anywhere but in your garden, that makes it difficult because gardens are becoming something more rare when people are starting to live in smaller and smaller spaces. So yes there needs to be a new regulation. I know for Brussels what could help is people hacking the system in big number, the legislation almost always follows up then. But you have to know how to play media and politics before, so it isn’t easy for newcomers to have that background. Having a guide of succesful tests could be usefull yes. You could develop A Taste Of Home as a platform for those experiments anywhere in Europe, and if communicated well people will use it as a guide. And legislation will see, if succesful, that there is an urge in their space to work around that!

Good luck with the project and keep us up to date!

Seriously? In Italy BBQs in the park are big – well, in Milano at least, now that I think of it I never saw it done in Emilia Romagna. I think the fad was started by the Peruvian community, who moved in in force. There are even web pages on “the best parks to do BBQ in Milan”, or Rome, or whatever: http://www.viaggiamo.it/parchi-dove-fare-grigliate-a-milano/

This is fairly typical: 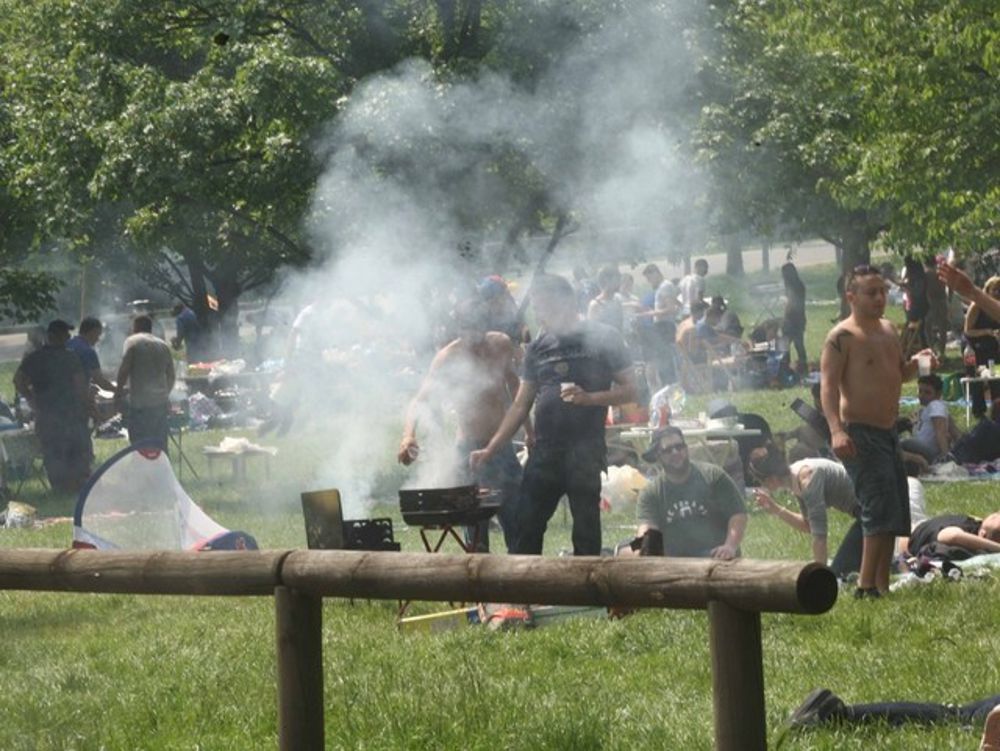 NO BBQ in Brussels

Whaaa that would be a dream, but in Brussels for ‘safety reasons’ we can’t BBQ in any park in the region, i’m really thinking about how to change that, but we are not enough. At this moment the open air pools is finally a worth a debat, so we concentrate on that. We don’t have any open air pool in Brussels either

Unless you turn it into a festival…

Where I come from a funny thing is happening: everyone loves festivals, especially during this time of the year, May-June before students are out of town for holidays. We had very strict regulations about sitting on the grass in our central park, you know that kind of green space where you really want to spend time in nature but can’t because it’s too cosmeticized? Nowadays there’s Jazz in the Park and the Big Hammock Day and these kinds of events which start as one offs but then create a demand and become a habit. What they have in common is that they start with a big push.

Everyone, thank you for your support! @ALBERTO, yes it makes total sense to get into the regulations and we are on it. Right now it looks like our project is more and more shifting to the not “commercial” side. There is already a big need just for cooking opportunities. @YANNICK I like the idea of collecting the successful examples. With @Nadia we talked about a possible meeting with all the parties involved. A meeting where we would bring the people we got to know while researching in the last weeks and some law expert together. We think it would be very nice to give them the opportunity to directly talk and find out about the things, which matter most to them. Though we would prefer an informal atmosphere to allow a secure feeling for everyone. This really is important to them! That is why we do not want to invite someone from the “parks and open spaces department” at least not officially. We found out that they are the responsible ones here in Berlin. We already tried to find someone from a citizen initiative or from our broader circle of friends, but so far could not manage. By any chance do you have any idea whom we could ask? What do you think about formal vs. informal?

@Louisa good luck with your idea!  I’ve had something like this in mind but I didn’t find enough funs for this Urban Cooking. You can have a formal green light if the municipality (or whatever) agrees and then you can organise the routine part like informal just for the atmosphere. In Greece we have strict rules (only in papers) about public spaces but every municipality has special Regulatory Decisions. The municipality services inform about the legality and in cooperation with the councilors or/and the citizens apply the final idea. Did you ask the topical authorities about that?

Informal for the win

You are probably not asking me, @Luisa (what do I know about the Parks and Open Spaces Department in Berlin, apart from the fact that its nam is probably one really long German word?). But if you can pull it off, an informal, safe discussion between the authorities and the people is very valuable. If you have a courageous politician or senior public officer at hand, you could ask her to come along as facilitator; the Parks people would feel authorized to attend because she is there, and they could have a chat off the record. But you need the right person.