An idea: European capital of welcomes

This idea was suggested to me by our flatmate Giovanni.

It would be very timely to play a candidacy to European Capital of Culture on welcome. Many feel that the soul itself of Europe is being made or unmade in the reaction the continent will muster to the refugee crisis.

The main idea is:

Everybody wins: the welcome concept gets traction, projects become easier because they feed into each other, and the city who stands for this has made a serious bid on the title. @Nadia, @Bezdomny, I noticed that Greece has one of the capitals in 2021. Belgrade also competing. UK in 2023 might also be an interesting place.

@Noemi, what do you think? Talk with Bob maybe? 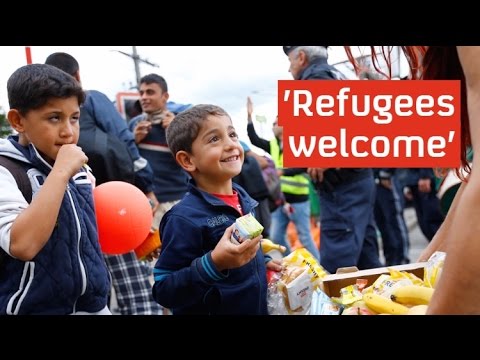 Sound idea. What do you need help with?

There have been at least two generations of refugees in my family, that and a bridge of the potential Clash of Civilizations.  I am intensely grateful to the humane impulse of the immigration officer who waved my Granny and mother across the border instead of following the book. The whole thing worries me sick.

The Greeks got a lot of press last month; the previous 20 months not so much.  The welcoming impulse is real it is human, people on the frontlines often do most.  The institutional welcome is more problematic.  The long term impulse to welcome doesn’t have historical precedence.  The Swedes and Austrians have absorbed many, with considerable generosity; the balance sheet (economic and/or psychic) doesn’t seem likely to hold much longer.  The Poles have a long tradition of xenophobia – they emerged from the Black Death with 1% of the death-toll of their neighbours and as the de facto European power.  The Greeks who have long been getting the massive first wave may be more stoic, or more indifferent.  Tolerating such large amounts of illegal immigrant street vendors of tax-free cigarettes wouldn’t work in Norway.

But here is my point: the culture of welcome may have a very short shelf life.  The Capital of a cultured approach to the teeming masses may work temporarily, but it is subject to considerable backlash.  Beyond the footage of proud Syrian families, grateful to be fast-tracked by the Greek authorities to the nearest border to the North, were the other migrants who wouldn’t exactly open the doors and hearts further up the line.  The world shall offer us no end of failed states: Syria was a climate crisis before it turned into a political catastrophe.  The impeding crop failure in SE Asia, will screw the pressure up yet another notch.  What happens when the entire population of East Bengal goes on the run: a massive build of hexayurts in the currently thawing Siberian tiagra?

I once wrote in a Canadian context that 'a family of Métis will be sharing your house – this can be rewritten with any number of population groups soon heading this way.  I am not convinced any of us have the cultural knowhow and flexible reaction patterns to absorb but a fraction of this development.

You are correct, @Bembo_Davies. This may well be a terrible (business) idea. It has two things in its favour:

But it also has a very big thing against it, the one you mention. Because of it, it is potentially divisive, and that makes for bad politics (though you could mitigate that by focusing on welcoming… tourists, or artists, or visitors, and only then extend it to poor people on the move).

Oh well, it was worth putting it out there. Let’s see what others think, and if anyone is inspired into action.

I’m sold, @Bezdomny. In fact, I even married a one-time war refugee

Athens is not among the Greek cities running for ECOC 2021: https://en.wikipedia.org/wiki/European_Capital_of_Culture

This makes for a manifesto Bezdomny!! Needs printing and posting wherever.

The welcome idea, sure, why not. But for the political breaks Bembo mentioned, it might work better to start by pitching one project at a time rather than a broader concept which might scare people off. And then strategically infusing it inside a candidacy. In Romania, like in Poland and countries in the region, heck almost anywhere it seems, racism flourishes: http://foreignpolicy.com/2015/09/22/mapped-what-each-eu-country-impacted-by-new-quota-plan-thinks-about-refugees/

Dunno what to say, the easiest is starting small I guess, have a portofolio/ inventory of projects like those that Jeff and Nadia are passionate about, and get them out when the time is right.

Ok, so how about this: a candidate ECOC chooses welcome as its theme. To a first approximation it is meant as welcoming new art forms, new artists (art schools as flagship projects), tourists, visitors, other Europeans etc.

At this point, you throw a curveball and insert a “welcome refugees” art project in the bid book. It would only be one among, say, 15, but it would play a disproportionate role in winning, because Europe’s attention is there. Also, it would be an art project, something shiny and cool, but it would still pave the way for more infrastructural stuff…

This is what the square near This is what the square near my house looks like on a good day. The Greek state is unable to act, the NGOs “pretend” to act, while activists and anarchists fill in the gaps. How? By squatting empty government buildings and providing refuge for already several hundred refugees during their passage to Germany, Sweden and beyond.

We started doing art projects with the kids, to brighten their day and have some laughs. We did stop-motion animation with kids from Syrian and Afghanistan. Do you think someone would want to see a film festival with these clips?

People? I think so, @Bezdomny. Thing is, I am getting a bit pessimistic on the role of the established cultural sector in this European Capital of Culture thing. So far, in all three cities we have been dealing with, they are exclusionary by default: this is our thing, it’s our chance to get back some of that cultural funding that was axed over the years, everyone move over. Matera even elected a new mayor from that sector, with the explicit program to dismiss the team who had led the winning bid, and the “outsiders”, putting the 2019 initiative back under the control of the local against the “outsiders”. Outsiders included both non-traditional culture operators (hackers, for example) and people who are from the traditional culture sector (like Joseph Grima) but not from the area.

So, this kind of thinking can be developed, and artifacts from the culture of welcomes might be attractive to audiences. But we need to figure out how to onboard the established players, or they’ll move to block it. I have no idea how to do that.

I think this overwhelmingly an issue that is dependent on the context, therefore the “*”. Of course small print will apply, but I think the critical part is signalling (and following up) an a priori openness. Surely not a carte blanche, small print applies very much. But typically this will still be a long shot from unreflected xenophobia. I am with you when you say that we may be in for far more hostile reactions to refugees, and we may be measuring the whole issue in different magnitudes before things quiet down. But that is speculation at the moment.

OT-ish: If you take the more general definition to xenophobia (“fear or hatred of the unfamiliar” (Webster’s)) I can’t exactly say modern Poland (including the huge diaspora, Polonia) makes a very good case. History, may be another thing - but even then things get pretty complicated really fast. The same applies to the plague. Paleopathology is a interesting field - but the factors leading to Poland getting away pretty much unscathed can be many. I’d recommend looking at some of Didier Raoult’s stuff - some of it is quite fun to check out.