In the USA there is not only a huge number of Covid-19 cases and deaths, but there is a large segment of the population that believes vaccinations in general are dangerous to one’s health and/or a social control scheme promulgated by neoliberals, Democrats, anti-Trump voters and…well, you name it. And a (limited) study just came out indicating that almost half the people surveyed said they would refuse a vaccine if it was offered. Enough so that if the ratio holds, a vaccine would not much stop the spread of the virus.

Is this also the case in Europe?

There have been numerous articles in the press suggesting that nations that do develop or obtain a vaccine will not be generous in sharing it with other nations. So there is that form of nationalism. But I don’t mean that so much as the relationship between far-right groups and a growing movement against any form of large-scale vaccinations.

This NYT article from May 18 describes the far-right German AfD Party as a central driving force in protests around Germany that attracted as many as ten thousand people. Anti-vaxxing often gets bundled in with a group of other issues such as anti-immigration, protests that job loss is worse than the pandemic and general anti-elitism. This bundling is also the case in the USA. I find it hard to tell between the anti-vaxxer contingent that really believes vaccines are a harmful means of social control and the overall right-wing nationalist movements who is using whom.

But how serious is this movement against vaccinations and how widespread is it in Europe? 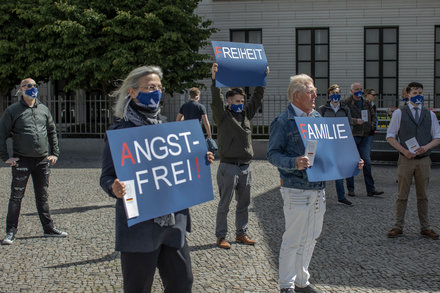 The pandemic marginalized the far right, as Germans rallied behind Angela Merkel. But the reopening has brought them back, and they are preparing to seize new opportunities.

Well that title, using so much generalisation/sta;ping overall

I don’t know about the situation in Europe, or where can we see such statistics but I would like to know in which camp would you place me:

Also, I don’t believe in nations even. They are for me an artificial construct, needless and used to control and enslave population. I have never voted for the right wing party in my life, in Europe I vote for Green party. But I would still vote for Trump in US at the moment.
While I am extremely liberal in relation to most things, I became quite conservative when I look at international economics since I became aware of how deals are made between countries, various power structures and different systems of power.

So, I am confused…where do I belong on this spectrum of populists/antivaxxers etc?

Also I would like to speculate on something and hear your thoughts on the subject:
Considering the timing of the riots, during social distancing and other measures in place because of COVID pandemic, and the number of new cases/day. Should we see a crazy increase in new cases in a week or two? Logically it should happen, if we consider the COVID incubation period?

Great question. I have not thought much about it. I will need to cross-check some of the Italian populists… who knows anything about this? @zoescope? @estragon?

I have been avoiding finding a name for each human category for a long time. Simplification is a risk from which I try to stay as far away as possible.

Overgeneralizing: guilty as charged. Still, you get the idea.

A vaccine this year - yes that would be very fast indeed. Too fast.

But if you do not believe in nations then why would you vote for America First wannabe dictator like Trump?

And as for an increase in infections due to riots, yes I assume there will be a rise. Which I find worrisome.

But the pandemic, inequality and racism are bound together so tightly that, at least in the USA, not one of them can be solved or even much improved without doing the same for the others. The systemic problems are too deep and intertwined.

But if you do not believe in nations then why would you vote for America First wannabe dictator like Trump?

Well I thought it can be understood from my comment, simply because I believe the alternative candidates were/are worse. If democrats pushed forward someone decent, not those two sickos, I wouldn’t vote for Trump

.
Was just giving an example in my post, things aren’t that simple and I believe majority of people don’t really fit into such categorization but are rather somewhere between.

But the pandemic, inequality and racism are bound together so tightly that, at least in the USA, not one of them can be solved or even much improved without doing the same for the others. The systemic problems are too deep and intertwined.

I agree. It’s not practical to divide people in such simplified ways though and it does not encourage discussion. Change will never happen without serious discussions…only further alienation, polarising and closing deeper within our own bubbles.

I don’t think we can just aim at changing “the system” as a whole. I would rather start with all those different elements one by one, after determining priority. For example, for sure access to good information, education, health and financial security should decrease racism.

Unfortunately political games in US became so volatile and reckless lately, not to mention ridiculous in some cases. Also this huge misinformation campaigns as part of the political rivalry, manipulations which are more and more obvious, are not increasing the trust in “the system”, therefore the society will have more much people who naturally deviate to alternatives. It will also make them less willing to accept government incentives, be it vaccination or anything else. Also, when you see people in the panels making decisions about COVID measures and vaccination are 2/3 people from big pharma, it’s kind of easy to see the conflict of interest, making it less likely to gain support within general population.

what you need to pay attention to is what looks like a cult at the intersections of all that is crazy. Follow Travisview on twitter, he monitors that crowd - they are literally ding dong. Those are the ones Id be worried about. Them and the popo