Art and the Commons - Antonio Serna 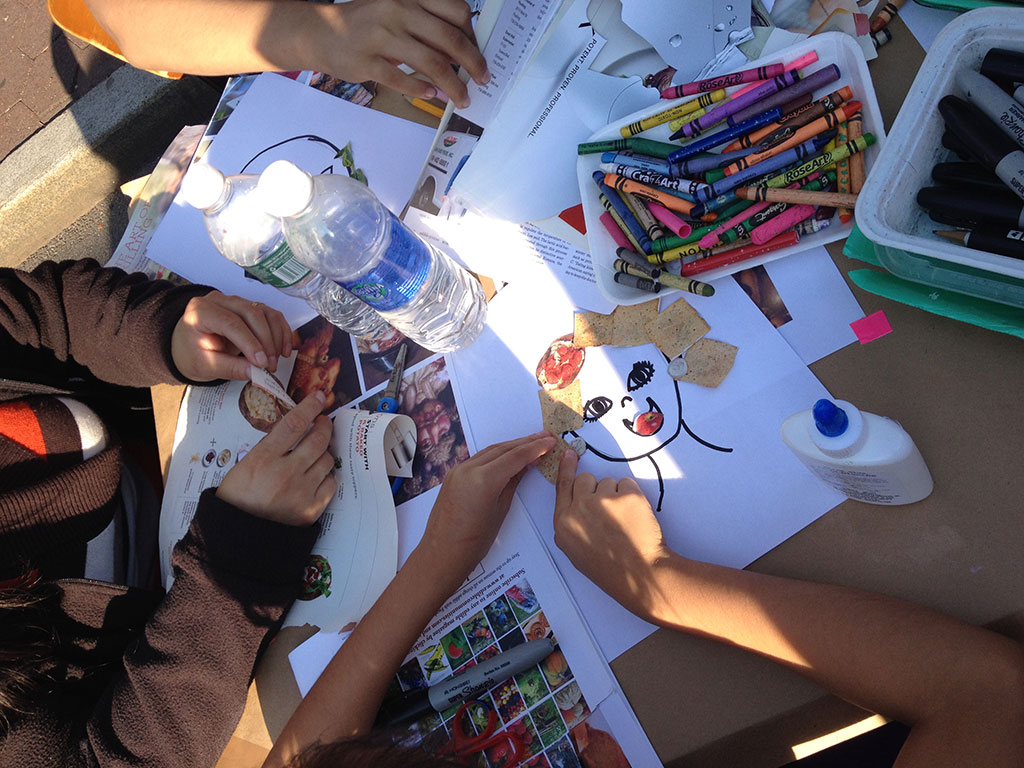 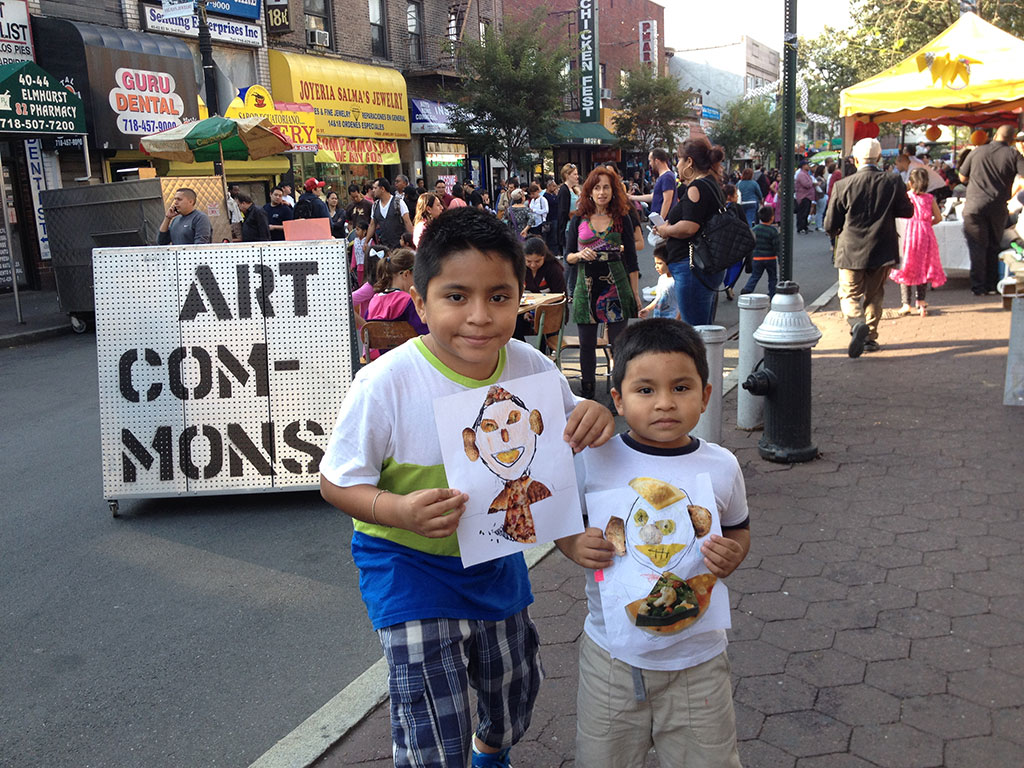 Can you tell us in couple of sentences what your project is about, how it got started and who’s involved?

Art & The Commons is a two part project focused on ‘art as a commons’. One part is composed of research, questionnaires, interviews, and workshops. The second part is about developing an actual artCommons, a model for sharing artwork outside or parallel to the  monetized system of art production. Currently it’s focused on visual arts, because that is my background.

The inspiration came from many places, I had been interested in this subject after reading about the Neoclassic period in France and the first attempts at making an all inclusive art public. Around this time I was researching the ‘artist contract’ of 1971, I thought it was very telling of how artists were and have been thinking about art all this time because this contract is strictly between the ‘collector’ and ‘artist’- I thought, what about the public? What possibilities can arise from direct public interaction with art. I’m not referring to public art that is managed and mediated by state and city institutions. I was looking for a more intimate and direct experience.

Along these lines, I was interested in the free press syndication of art during the 60s that gave rise to the counter culture zine and underground newspapers of that time. These were early precursors to the Creative Commons movement. During Occupy Wall Street I found it fitting to try commoning within the movement. Working via consensus in working groups, we came up with  ShareOWS but I think people didn’t get the point. It was pretty much a wild west back then and before we knew it, the movement was already being squirrelled away into existing hierarchical institutions and private structures, never reaching the 99% and never de-monitized. It’s not surprising because these histories of commoning are never taught or explored in popular education, and there are more examples than what I’ve just pointed out.

Later, several of us converged under the umbrella of Making Worlds a commons working group. I worked with Maria for some time doing workshops here and there, basically talking to different communities. Later I began working with another member in Making Worlds on a pilot project in Jackson Heights Queens 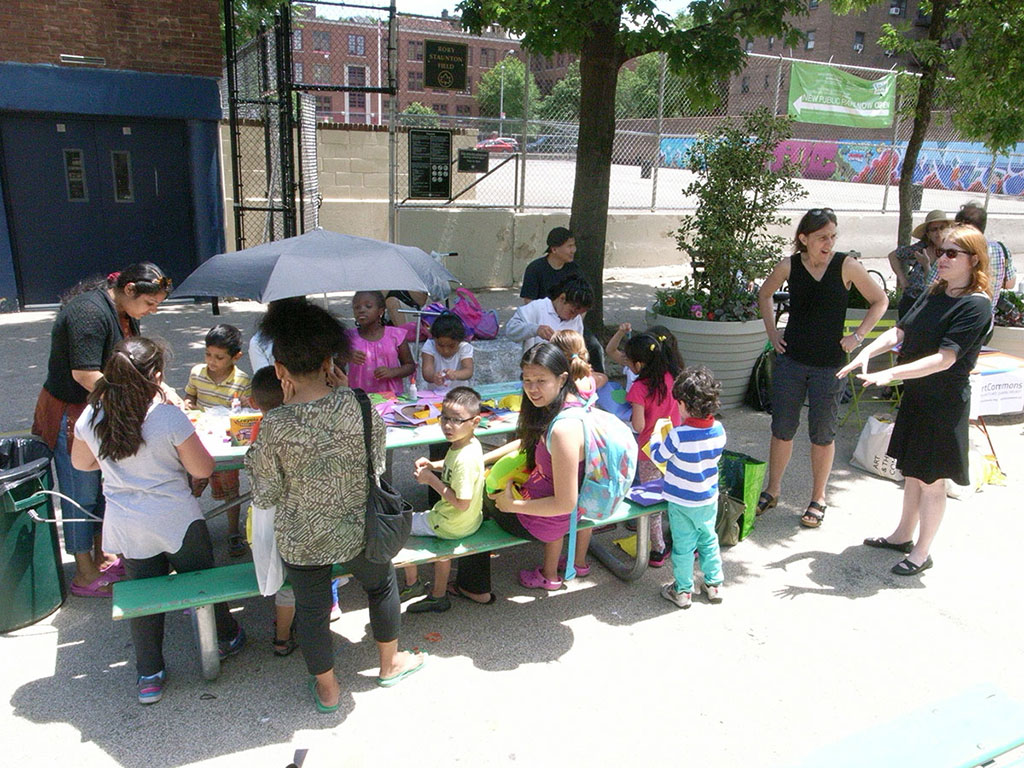 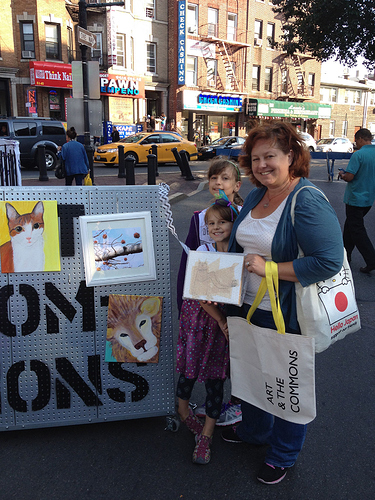 Getting people to think of art as something we can share. Through this we would create new relationships and experiences with art. Hopefully this can give rise to a new collective experience thats both public and personal. There are many potential directions to go from that point. We need to move away from the alienating and de-powering idea that art is just something that people with money can buy and sell, or something that only intellectuals can make and understand. It’s visual communication, simple as that, everyone should exercise and share it.

When I started to work on artCommons pilot project, wording was very important. I wanted to get away from the terms loan, borrow, rent or lease. I decided to use the word ‘care’. For me ‘care’ has many applications, care for family, friends, relationships - as well as care for resources, assets, and infrastructure. Where I come from ‘care’ is implies a delicate and preciousness and has nothing to do with money. It’s part of life, eating is caring for your body, maintaining your home and habitat is caring for your environment, teaching and helping others is caring for your culture and society. 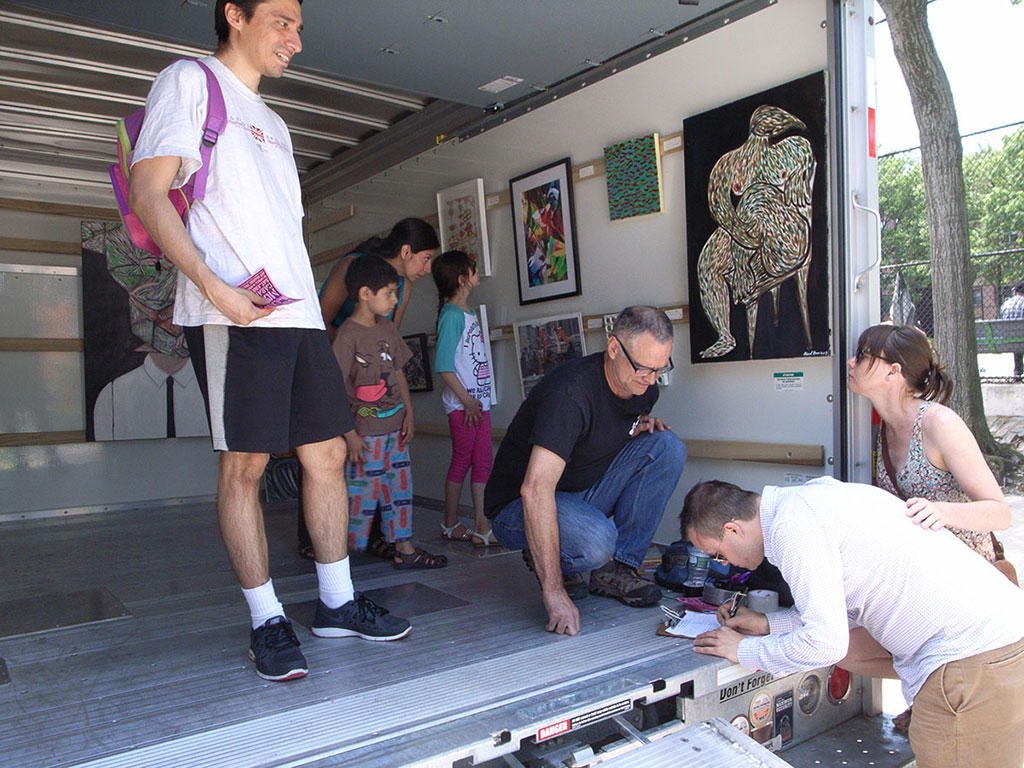 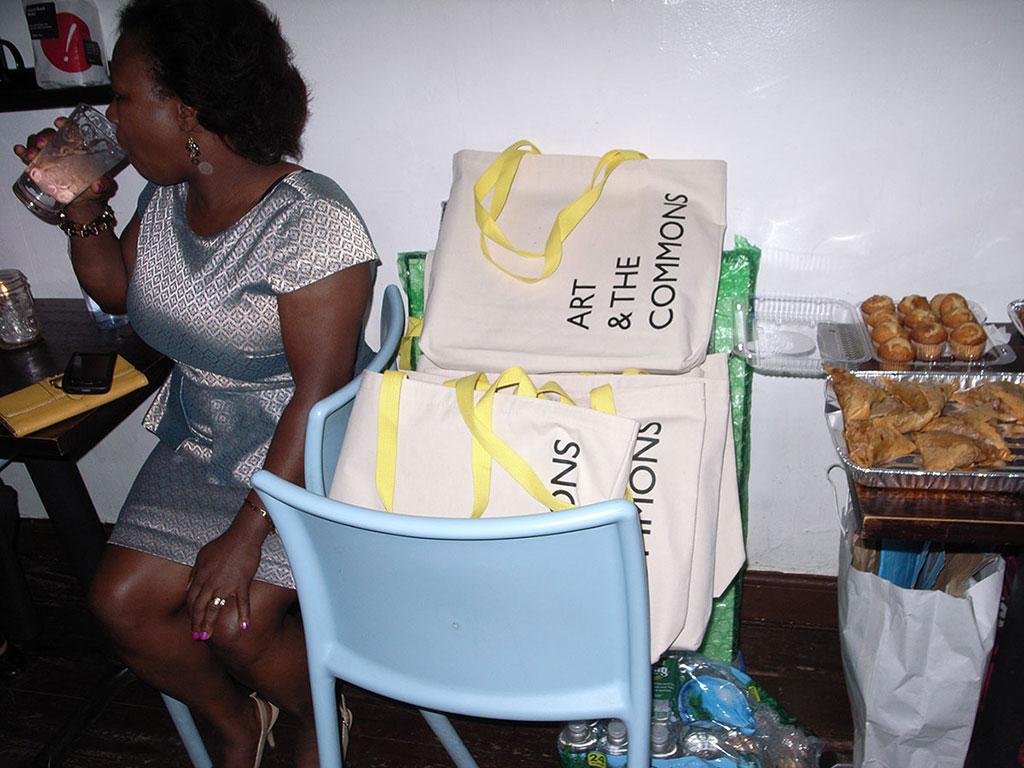 One major challenge from my experience of doing a 1year pilot project in Jackson Heights is that commoning in a community that is not your own requires a lot of time on the ground, perhaps double or triple the amount of work because you have to take time to understand the geography, community make-up, issues, history etc. Each community has to evolve naturally and cannot simply be implemented from the outside. Luckily I had some very good local support to mediate these nuances.

The idea of ‘care’ is way more complex than I first imagined. It’s very very hard to understand another culture’s understanding of care -especially if it is very different from your own. The best advice I can give is to be flexible and hope others are too. And hopefully we can do our best to create open systems or frameworks that are very flexible and open to the diversity in these vibrant communities. 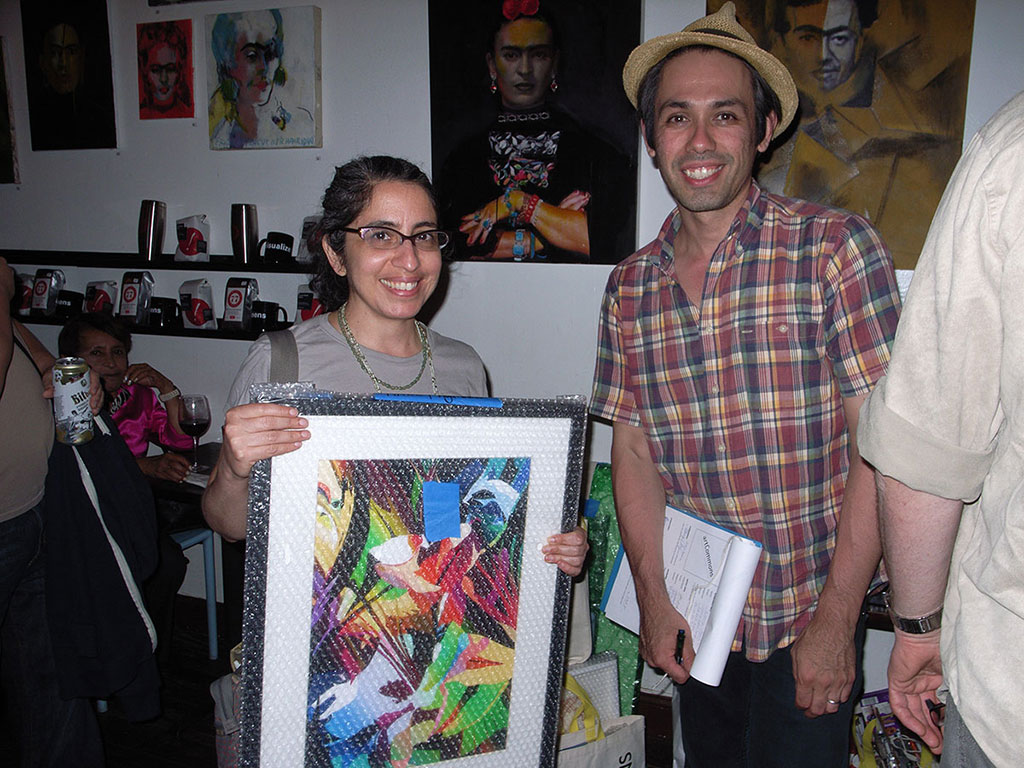 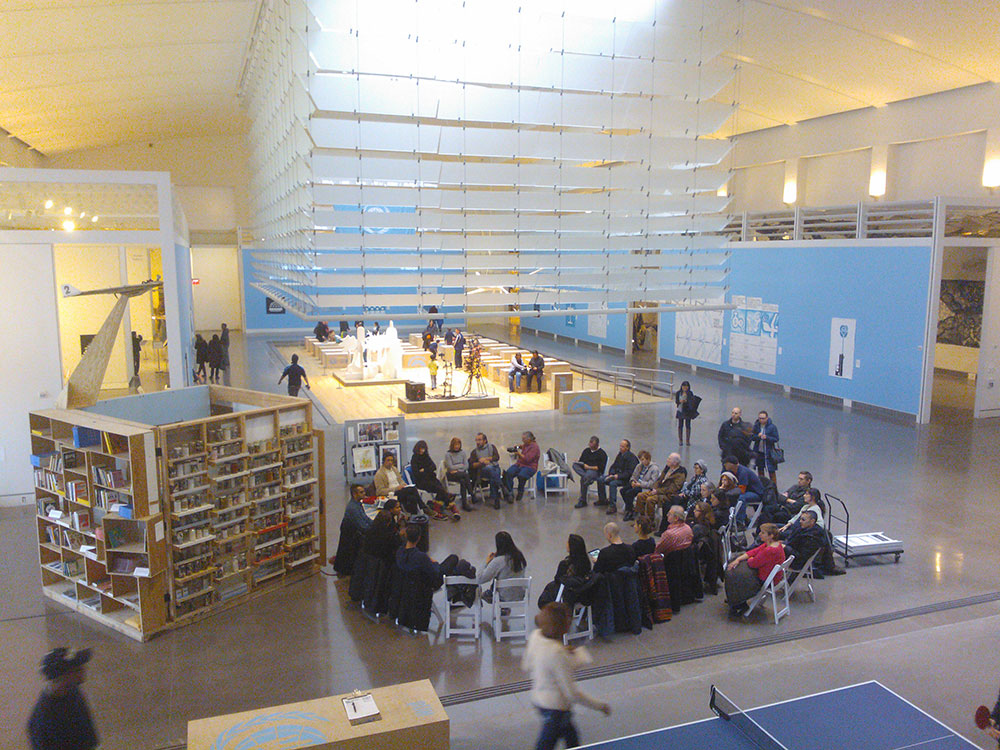 I’m inspired by grassroots organizations that use networked or federated systems. Each node is interconnected in their work but not homogenous or designated more important than others. I hope we can grow artCommons organically in this way. Domestic Workers United and 596 Acres are two groups that use a grassroots approach to expanding and cultivating grassroots knowledge and energy.

I’m also inspired by individuals I meet on the street. Since the first time we set up in a stand on the street, I found much encouragement from people we met there - they are the ones giving good practical advise based on experience. Books, or theorist, and institutions are a bit behind because of their bureaucratic structure - it takes a while for this street knowledge to get to those areas. So if you want feedback and inspiration just ask the people on the street.