"Attack Surface" A chat with Cory Doctorow on Interoperability and Security 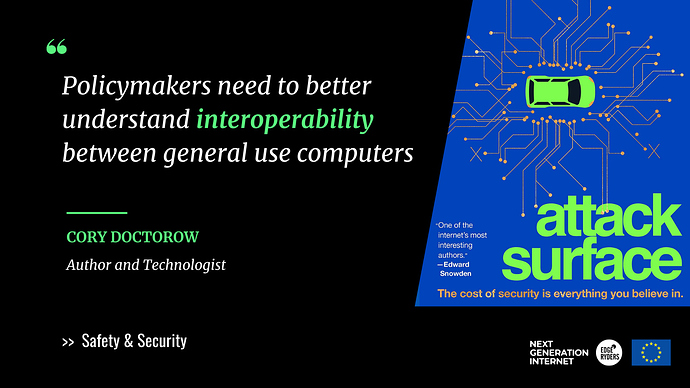 So it seems Zuckerberg is still on mission to mine every human interaction in the world for data that can then be monetized.

Fbs announcement this week reminded me to share our conversation with Cory Doctorow, a science fiction novelist, activist, and technologist. He is a research affiliate at the MIT media lab, and cofounder of The Open Rights Group in the United Kingdom. He has worked as European director for The Electronic Frontier Foundation, and as their delegate to the United Nations. Cory’s primary interest is interoperability in emerging technologies and how the relationship between technologies will affect the economy of the future.

We interviewed him a while back in connection with the release of Attack Surface - his latest book. Our summary of the transcripts from the interview:

Cory begins by discussing interoperability, which is the ability for different computer systems to work together, despite having been made by separate manufactures. He theorizes that many policy makers do not properly understand interoperability between general use computers. This has led the computer industry to a long history of monopolies, with a small group of companies left in charge of all the decision making for an entire industry. Cory believes that this can be avoided. He notes that unlike physical technologies, such as rail lines, digital technologies are inherently designed for interoperability.

Cory goes on to discuss how a lack of interoperability has created a handful of disproportionately powerful individuals and companies, specifically Mark Zuckerberg of Facebook. He notes how Facebook’s ability to merge with so many other platforms has made it a practical necessity for internet users. He then cites how companies such as Apple came to rival and eventually surpass the likes of Microsoft, IBM, etc. He speculates on what role interoperability, or a lack thereof, will play in the development of future computer systems.

In the next segment of the chat, Cory retraces his own experiences with the development of technology. Starting in 1979 when he got his first Apple device, he recounts how he witnessed the growth of technology. He recalls learning about how companies like AT&T and IBM dealt with scrutiny from the DOJ, and the subsequent effects on the industry.

Discussing the early evolution of the internet, Cory discusses how the web “went from being this incredible wild place to four giant services filled with screenshots of the other three.” He then discusses whether or not anti-monopoly laws are ethical or effective.

Cory goes on to discuss privacy and data collection. He talks about the Cambridge Analytica scandal, and the preceding technologies that allowed it to happen. This topic segues into a discussion on how large tech companies have begun making consumers’ decisions for them, with targeted advertising, paid placements, etc. He notes that companies like Facebook are held to some level of ethical standard, but if broken up entirely, the digital ad world might be run by smaller companies that are willing to be dishonest because they may not be in business for long.

Later in the interview, Cory discusses copyright law’s role in technology. He specifically discusses Oracle’s ongoing quest to make purely functional elements of software copyrightable, which he sees as a profound potential setback to interoperability.

In closing, Cory discusses the personalisation of private devices and how people use them to improve their day to day lives. He ends by speculating on how different technology would be if your average user was allowed to take part in the designing of new technologies.

As we near our November 29 event, I’ll be revisiting some of what we have learned about the issues around tech giants, security etc from many conversations both inside and outside the edgeryders community. Welcome to join the event, the format is quite different (think a card game you can play at the pub) rather than a conference. Info & Registration here.

He notes that companies like Facebook are held to some level of ethical standard , but if broken up entirely, the digital ad world might be run by smaller companies that are willing to be dishonest because they may not be in business for long.

Yes - that’s a good point. Is Facebook already big enough to fail? … so it needs full attention to get things “right”?