At first, we thought that these categories disappeared completely or simply wouldn’t show. But they are still there and are displayed but only if we change the Discourse Tag filter to Any Discourse. Unfortunately, just being able to find them using search is not very useful to us, because what we are currently most interested in is the hierarchy, and we won’t see it when using the search option.

In other words, it seems that the system doesn’t see them as belonging to the ethno-poprebel discourse.

Hello @Wojt, I took the liberty of turning your message into a public topic so @matthias also has access to it.

However, I cannot reproduce the issue. It seems to work well for me. 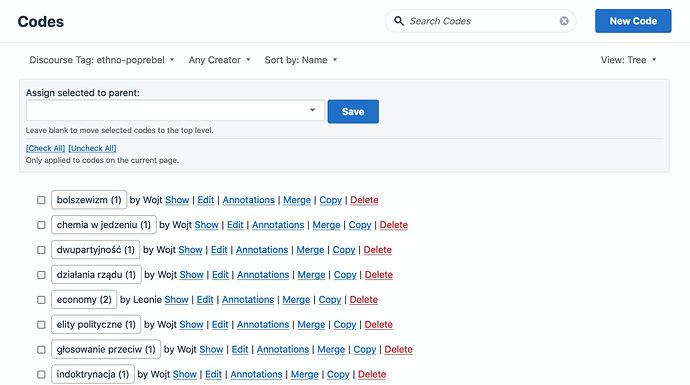 Further down I also find the hierarchy tree:

Maybe I misunderstood your explanation?

Maybe I misunderstood your explanation?

The system does show the hierarchy but just for four Z categories, namely: Uncategorised, Covid 19, Emotions and Ideologies.
There is nothing IN THIS VIEW for: Problems, Beliefs and Values, Social and Political Processes and several others. Initially we had 12 Z categories, we are working on reducing that number together with the number of codes within them. But for some reason we can’t see the hierarchy for all of them.
Could you please confirm that you too can see just four Z categories?

Yes, I have the same. Might there be simply a pagination issue, @matthias? Or do I need to open a GitHub issue?

Also, @Wojt, could you name a code that should be in that page, but is not? For example, is Z Problems one such code?

Hi, yes. Z Problems - Category and all the codes assigned to it are good examples.

Hey, BTW, what about those codes appearing as poprebel despite not being used in posts tagged for poprebel?

Can I please ask everyone to provide hyperlinks !!! in your bug reports whereever possible. You can link to any and all pages of the OpenEthnographer backend. Makes it much faster for anyone reading your report to confirm and triage the issue.

[When filtering by Discourse tag,] The system does show the hierarchy but just for four Z categories, namely: Uncategorised, Covid 19, Emotions and Ideologies.

This is not a pagination issue.

There are two solutions:

what about those codes appearing as poprebel despite not being used in posts tagged for poprebel?

Are you referring to the issue reported by SZdenek here? In that case, I answered that below his report already.

Indeed, the method suggested by Matthias works. Yesterday I radnomly assigned the code "Z Problems - Category"to one of the texts in the corpus and the category automagically appeared in the list together with its hierarchy.
However, @matthias, you need to know that at some point one of you guys introduced some changes into the code of the interface and we WERE able to see ALL TWELVE Z Categories, no matter if they were used as codes in the corpus or not.
Actually, we decided to keep them nonSSNA codes and did not want them to appear as codes anywhere.

Now, I have 2 questions (or perhaps they are one and the same question): does anybody remember the exact reason why we decided to keep them non-SSNA? What will be the consequence of applying them as codes in the corpus (how will it affect our visualisations?).

What will be the consequence of applying them as codes in the corpus (how will it affect our visualisations?)

I can answer this one.

As long as you only assign these metacodes to one post in the corpus, nothing will happen. The metacode will now co-occur with all codes in that post, but these co-occurrences only have depth d = 1, so they get discarded when we build the graph.

Have you considered any other joining the process with the helps of https://rocketech.it/blog/post/top-5-trending-backend-technologies-to-follow-in-2022? An outside perspective could be very useful.