The Karlovary region (esp. towns of Cheb and Sokolov) at the very Western part of Czech, has been hit particularly badly by covid. Currently experiencing the highest numbers of deaths in the country, the medical staff and gov. representatives from the region have been crying for help for some time now. They describe an all-round collapse of their medical infrastructure, with doctors having to choose between who they let live and who die.

For several weeks, the neighbouring German states of Saxony and Bavaria have been offering help with transporting patients from the Karlovary regions to their hospitals. For the local population this did not come as a surprise, considering the close proximity and connection that people from both sides of the border have been sharing for decades.

This offer, welcomed by the local staff and population, has been however declined by the government. During his visit to the region last week, the Czech minister of health stated that “this is a matter of symbolic importance… [and] that the Czech Republic can take care of their citizens by itself”. This generated a significant controversy in the media and among people from Cheb and Sokolov, who fall as victims to the neglect. For them, it is difficult to understand why the government prefers to spend high and unnecessary resources to transfer patients via helicopters to hospitals in other parts of Czech, often as far as 100km away, while the nearest hospital (just 10km away) offers its full aid. Unfortunately it happens to be on the German territory. Not to mention the inconvenience this will cause to the families of the hospitalised relatives.

As one of the locals from Cheb described, it seems that the government cares more about its PR than the lives of its citizens. 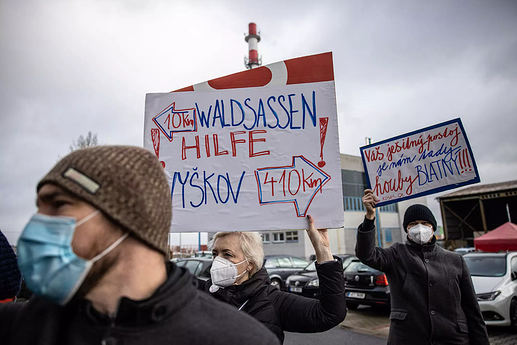 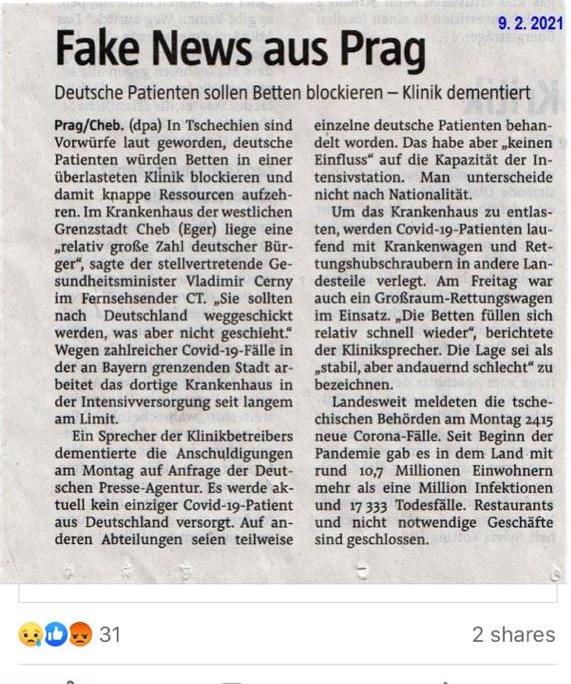 Points to explore further:
• Has this been covered by the German media? And if so, how? (I found this screenshot on fb, what does it say @Djan )
• People in the region have been signing petitions and protesting against the gov.’s decision to reject Germany’s help. (see the photo)
-Might be interesting to follow this up and see what the wider opinion on this is from both German and Czech sides.
-I know someone living in Cheb, who might be willing to talk to me about this.
• Overall, I think this case generates some interesting themes for our project.
-I think I read somewhere that Poland also rejected Germany’s offered help? @Maniamana

Let me know what you think

“this is a matter of symbolic importance… [and] that the Czech Republic can take care of their citizens by itself”.

Incredible…
I think talking to people in Cheb is a great starting point, as they could relay how this changes or reinforces some attitudes towards local politics.

Very nice to e-meet you @jitka.kralova! I’m Noemi, working on the community management side with Amelia! Hope to speak soon and figure out how to best support your work, so I will be in touch.

thanks for sharing this! Here is a link to a RND (German Newsroom Network) article based on DPA (German Press Agency) reporting

The article was also published online by major News outlets such as Zeit Online and Die Welt.

The article states that comments made by the Czech Deputy Health Minister Vladimir Cerny regarding a “relatively large number of German citizens” occupying beds in an overburdened hospital in the border town of Cheb, and who “should be transferred to Germany, which is not happening” were refuted by a spokesperson of the hospital.

The hospital’s spokesperson countered claims made by Cerny and highlighted the fact that while there were a few German patients in the hospital, there were no Covid-19 patients.

There were news articles in October and November focusing on the fact that Poland did not want to accept support from Germany regarding the pandemic. Interestingly the word “pride” was often used in title, i.e. “Poland is too proud to accept German help”.

In the conspiracy myths ridden Telegram channels I am lurking, members of various groups have celebrated comments made by Czech Republic’s former President Vaclav Klaus, who labelled the pandemic “Covidism”, reminding him of communist times where freedoms were limited/eroded by state power.

Furthermore, the decision by the Czech government to not prolong the Corona related state of emergency beyond February 14. was also lauded.

In general, there seems to be a broader theme in several of these Telegram channels where the Czech population is viewed/celebrated as standing up to lockdown measures, and a desire to emulate this “resistance” in Germany.

That’s great @Djan, thanks!
Indeed, the decision not to prolong the state of emergency voted on by the opposition yesterday will generate lots of new and related issues and discussions. Let’s see if the topic of cross-border solidarity (or lack of it) is something we’d like to pursue any further.

Hi Noemi, very nice to meet you too and thanks for your response.
I’ll try to get in touch with the contact in Cheb to find out more about what is going on on the ground.
Speak soon

I think focussing on cross-border solidarity or lack thereof could be really interesting. Especially with regards to impact of nationalism vis a vis cross border cooperation in different groups we are engaging with.

Hi Jitka, interesting piece. Poland indeed didn’t take on the German offer to help out, but it wasn’t broadly discussed in here. Atm health related populism is a go to for me, the pandemic has made it clear that our health care system isn’t in the best shape, to say the least. The case you mentioned might not come out in interviews, as it didn’t draw almost any media attention - the ending of October/the beginning of November was when the protests for women’s reproductive rights started here (the biggest protests since transformation), gaining momentum and dominating media discourses for weeks.

Ping @Vojtech who is not (yet?) working with us? I think this could be interesting as an inspiration for you too, should you come on board… talking with the team about the topics for interviews and preparing together. Just FYI

A lot of chatter today in various anti-lockdown conspiracy groups on Telegram today with regards to the situation at the German-Czech border. Posts revolve around calls to re-open the borders and to buy supplies because of an imminent collapse of supply chains (the traffic jams at the border are provided as proof thereof).

Hi, I managed to get hold of the person living in Cheb.
Here is a brief summary in English of the interview we did.

Thanks @jitka.kralova, after reading your interview notes it seems that the reasons for noncooperation remain a mistery even to the people living there, who had nothing to do but to pay the consequences and be flown across the country rather than 30 km into Germany. It looks like there was compliance all the way, that neither the mayor nor the citizens could change this. Do you know if there were any attempts to transgress this?

This all is further reflected in the perception (quite general from your other interviews) that Germany did a much better job handling the crises and giving social welfare aids.

“The Czech government will ask the Court of Justice of the European Union (CJEU) to begin imposing daily fines of €5 million against Poland for failing to comply with a recent order to close down the Turów brown coal mine. “The lawsuit should be filed [to the CJEU] in the coming days,” said Czech environment minister Richard Brabec, quoted by the České Noviny news service. He also revealed that the government had appointed him and foreign minister Jakub Kulhánek to negotiate with Warsaw.”