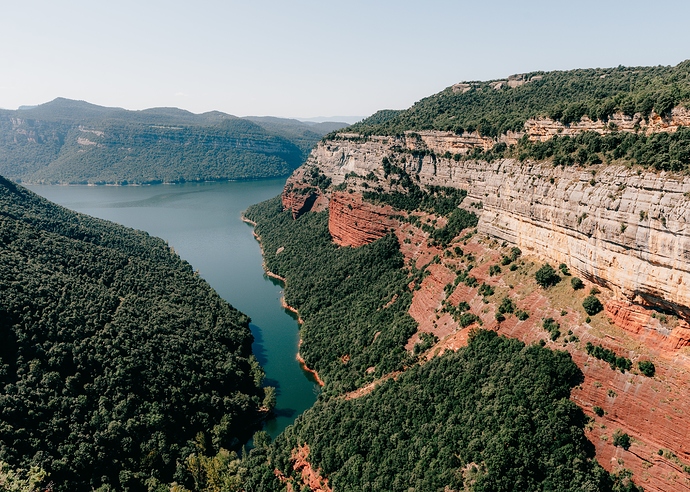 @Alberto and @Joel had an interesting conversation about the Catalan Integral Cooperative last week. Founded 10 years ago it’s a model for panarchy or polyanarchy that enabled thousands of people across the region and the world to live in a different way. Dual currencies, building new networks and the culture of the Catalonian people are some of the reasons why it worked so well.

Joel explains that with panarchy - or poly anarchy - you don’t have to move to join a new system, you can govern yourself in different ways, from where you live. In the past people associated communism with Russia and capitalism with the US.

“Why not in the same country, could we have different ways that every citizen voluntarily aggregates this kind of government?” Joel asks.

How do you go about adopting this model?

The cooperative had 3000 associates but the collective was producing things that were distributed to markets and shops and possibly reached tens of thousands of people - some not fully realising about the network.

Alberto makes the point that with the CIC, it didn’t try to replace the state but acted as a separate structure: “If you study the CIC it’s the opposite of a monolith. Many things are small that are connected to each other in a web by way of relationship, trade, economics trade, ownership, financial, ideology etc. ## Instead of scale it has depth.”

2. Brains behind the operation

@Joel explains that Enric Duran, activist and author, was the major person behind the project and many people were attracted to his ideas.

“It was an experiment and practice. (We said) Let’s not waste much time thinking or discussing, but let’s do it once we have a discussion.”

Dídac Sanchez-Costa was another who helped with the coordination of the movement.

“We have known that everything before has failed…” @Joel says. From the outset he explains that the group decided they wanted decisions to be made upon consensus rather than voting majorities.

What was it like to live in the Catalan Cooperative?

Joel says in villages, towns and the city of Barcelona people lived within this system:

“The feeling was deep happiness, because you are not isolated as a little community, always seeing the same people. Part of the physical spaces of the CIC, twice a month we had general meetings - in Barcelona and and others in the north, east and west.

“That was three days a month and felt like a holiday weekend. We had our concert at night and good food almost for free at very cheap prices with social currency. For example 2 eco or a meal. It could be the equivalent of 2 euro and you are eating the most wonderful ecological food.

“The feeling was freedom and we connected much more. Our surroundings came (to feel) like a general family. It felt like a tribe a little. It felt like something else. We were meeting to talk about our reality and friendship but at the same time it felt like there was friendship.”

“Ownership of goods felt different than when you buy with currency”

Joel explains it changed the way you think about money. So you can say to someone ‘I cannot give you something immediately’. It happened in Mesopotamia (where it’s believed the world’s first civilisation emerged).

@Joel says: “In a crisis there is no money flow but everyone has the same needs and the same capabilities of production as the day before- why does that happen? Because we are waiting for the bank, for private banking.”

“This is cyclical, and I have read many economists who tell you clearly this is artificially manipulated. So if we have a counter cyclical currency, when they remove the money from the market we can use that. We don’t need to have one, we can have several because one way of (using) money could be a social currency - we have fantastic tools like this community exchange system (CES) created in South Africa by some. There are other ways of money in economies - it could be gift economies, exchange or cryptocurrencies. We are already decentralising when we moved to Bitcoin.”

Other forms of currency used:

“They have found it very useful because when you spend echoes you can save euros. … with echoes it’s a 20 - 30% level of acceptance. For me, I found it gave me a lot of freedom. Others felt like they were punished because they felt like they had to use their echoes,” Joel says.

“The best is to do everything and use all the economies at the same time, gift barter exchange, echoes, euros, fair coins and even bitcoins.”

“Bitcoin and euros are very good for community economies, for example, we want to make a new building, we want to buy things from the market, decapitalise them and sell them in echoes inside our core networks”

@Alberto makes the point that in Sardinia Sardex is used.

Later on, the Liberex currency, used in Emilia-Romagna region of Italy is spoken about.

Where do we go from here?

@Joel: “We should, not to replicate exactly what the CIC did, but we should gather and find, what and how people would like to live”

Issues raised during the discussion:

Comment below if you have any thoughts on the following:

Are there elements of indigenous societies that can give inspiration to other panarchy models?

How do you incorporate modern healthcare into a society like this, when you approach big problems from a local lens?

OK I’ll bite on modern healthcare. The argument against seemed to be that modern high capital intensive healthcare was incompatible with these models.

One being that the vast majority of healthcare isn’t acute - it’s community / social care. Equal care coop and Buurtzorg are interesting examples.

The second point would be that tech advance means what used require a hospital can now be briefcase-or-backpack. Hackers here could details better than I.

The third would be the negative externality analysis - I can’t find the study but it’s on the health damage done by various ‘high tech’ solutions, eg drug production causing cancers elsewhere, that exceed the gains.

I think I agree with this analysis. I do support emphasis on prevention, community health/wellbeing, social care, diet, environment, and not overdoing what medical help is given if it is not really needed. From my perspective, this should save resources for when the high-end medical help is really needed. I say this as someone who has hardly ever needed medical attention in my life, but I would not be here today had it not been for a very high tech cure in 2016 for a tumor that certainly would have killed me.