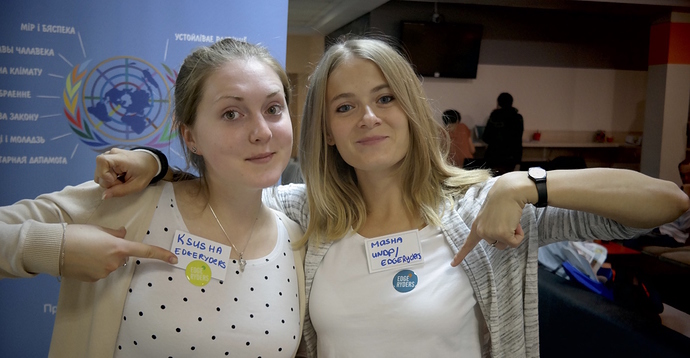 Back in November 2014, in the context of our Spot The Future Belarus project, Edgeryders joined forces with UNDP Belarus in setting up a workshop aimed at producing a civil society position paper on a policy document called the National Strategy for Sustainable Socio-Economic Development. This turns out to be an important document: Belarus is to a large extent a planned economy, and its government takes planning seriously.

However, the tradition of civil society contributions to this sort of planning exercise is tenuous at best. Belarus inherits from the Soviet era the notion of the State as the Prime Mover; it has both the structure (in this case, the Ministry of the Economy’s Research Institute) and the legitimacy to do its own planning. There is no allocated space for the contribution of individual citizens, or small groups thereof. The Research Institute had clearly signaled that it would welcome our participatory exercise, but we were still uncertain of whether we could get high-quality participation from citizens most of whom had (1) no significant experience of first-person participation in collective decision making, (2) no guarantee that their hypothetical contribution would be taken on board and (3) probably some worry that advancing a radical proposal would get them in trouble – Belarus keeps a tight watch over expressions of free speech, both on- and offline (example). Indeed, despite the best efforts of UNDP and other entities in facilitating citizen participation, many observers report civil society in Belarus as quite passive.

As it turns out, we were wrong to be worried. Our impression was not that of a passive civil society at all. The workshop was deemed by all a success; despite some glitches, attributable to lack of experience, the room’s mood was highly constructive and everyone left it a bit more optimistic than they had entered it. And most importantly, the citizen’s suggestions were taken seriously into account: on January 9th the Research Institute wrote to UNDP to acknowledge the contribution, and let us know that 8 of the suggestions advanced during out workshop were incorporated into the NSSED. Number one has special significance, and was the one most passionately advocated by the room: provisions of special legal status for social enterprise and social innovation. I think it is not too much of a stretch to consider this proposal a direct result of the Spot The Future Belarus project: as we engaged with social innovators, we saw them struggling by trying to fit their activities “on the edge” with legal provisions written with normal businesses in mind. This makes for a striking difference with what we see in the European Union, with its array of legal and financial instruments for social enterprise and social innovation, and made us conclude that social innovators in Belarus are really fighting an uphill struggle, much harder than the one (already hard enough, thank you very much) of their Western European counterparts.

So, we win this one, I think. But that does not close the bigger issue: Edgeryders depends on open societies to function. All our methods require openness of process and free circulation of information: people find us by peer-to-peer referral on the open web; decide to engage out the kindness of their heart, or sometimes because they take up a job with us, but they always do so in the knowledge that there is no penalty for trying to build a better world. Out-of-the box, even subversive thinking is encouraged and rewarded, not only by Edgeryders but by society at large – or at least, lip service is paid to it.

In Belarus, we have found the culture to be much less enamoured with subversion and disruption; as a consequence, social innovators tend to take a more nuanced approach. They still think way out of the box, but many of them prefer to keep a low profile on it – in fact, many have declined to be featured on our blog, despite it being 100% legit (we operated under UN aegis and within line of sight of the Research Institute of the Ministry of the Economy, so arguably of the Belarusian state itself). They seem to think publicity, even when highly positive, is a liability for what they do. This is a serious problem, because, by lying low, these innovators are not inspiring others to ride their own edge, and are not sharing knowledge about their approaches, successes and failures – and this might result in duplication of effort. Interestingly, the same people seem to have no problem in making general points to advise their own government – indeed, this is what happened in the workshop.

We at Edgeryders make a point of being transparent and sharing what knowledge we might have. That includes publishing on the web any report we produce. But in the case of Belarus, we decided to prioritize the concerns for privacy expressed by the people who entrusted us with their experiences over our own preference for “working out loud”; we moved most of the about-project conversation off-platform, and we turned reports over to UNDP,  letting them decide who gets to see what. At the time of writing, they seem inclined to publishing our methodology report, with all names omitted, from their Social Innovation Lab page. If you want to know more, we suggest you contact Olga Saet: olga [dot] saet [at] undp [dot] org. Individual stories of those social innovators who have consented to be featured on the blog have always been publicly accessible from the Mission: Belarus project page).

At this point, we feel it is also safe enough to divulge the position paper itself: you can download it from this page.

Much to learn from

Quite inspirational, even to be able to put all this in writing and keep open a channel for thoughtful communication between Belarusian innovators and Europe at large. Their voices are no less truthful and inspiring, even when they have been reported through other people’s voices throughout Spot the Future Belarus.  A big thanks to @masha_cheriakova for taking the lead in this project <3 Curious Masha, have you heard back from your friends during or after these reports were drafted? The result of their input is actually tangible, albeit in writing still. Are there signs of new found collaboration and trust with civil servants?