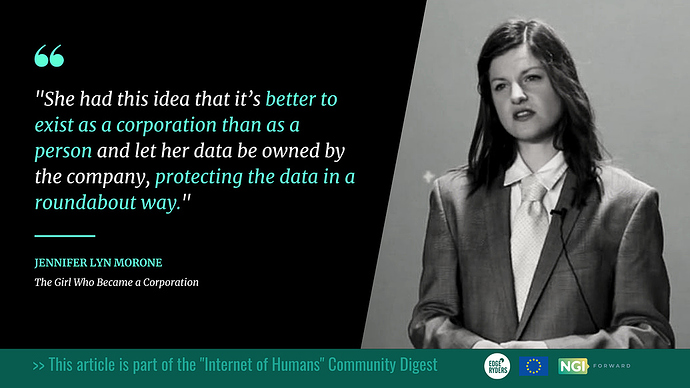 Jennifer Lyn Morone, The Girl Who Became a Corporation

Jennifer Lyn Morone is an artist with a deep interest in social change, as proven by her initiative in leading Radical Exchange Foundation, an NGO. In 2013, during her stay at the Royal College of Art in London, where she was undertaking a Masters in Design Interactions, a program that focused on the impacts technologies might have on society. It was during this time that Snowden’s revelation had come to light.

She was experiencing difficulties in her personal and professional life, feeling a bit helpless at the lack of opportunities and lack of diversity among the community she was in during that time. All the while, she was noticing how addicted people were to technology.

Her research went down the proverbial rabbit hole following Snowden’s revelation. First pondering the concept of data, then the government use of it and the why’s and then how’s they collected data. This rabbit hole led eventually to the intermediaries - the data harvesters - which at the time were primarily the big tech giants, the lesser known data brokers, and some services built in between. What Morone noticed was that upon this network of surveillance was a rapidly growing data industry and a nascent booming economy. It seems all the big corporations put great value on the data of people, thereby making regular people valuable, just by existing, but claiming ownership of the data and depriving the data creators from engaging in that economy.

When she looked at the data harvesters there was one unifying characteristic, they were all C-Corporations, registered in Delaware in the USA. Further research into corporations and particularly C-Corps explained the wild west behaviour occurring in the digital space. For starters, corporations essentially create their own laws, they are the only entity that can legally protect their ideas and doings, especially trade secrets (which could be considered equivalent to an exchange of an idea in an email thread) as intellectual property, and the Citizen’s United ruling in 2010 basically sealed the deal that corporations are people. Apparently, it was now better to be a corporation (legal person) in terms of rights than it is to be a human (natural person). So she had this idea that if a corporation can be a person then a person can be a corporation. The added benefit would be that, in theory, the legal container that exists with a corporation can be used to own and protect her data as intellectual property, as well as use some of the data created by Morone internally to create a feedback loop for efficiency and as a resource to develop an endless array of products. If this sounds like an absurd endeavor, it’s because it was and is. The protest project, while created in urgent earnest to the mounting problem we are now contending with, was also highlighting the futility of trying to solve the issue from the capitalist prerequisite of individualism, particularly with notions of private property. Each individual’s data does not have much value in itself as isolated units of information. While it might be in one’s self interest to make their data their private property, especially with sensitive information, the real value that comes from one’s data is in the aggregation of the many - a system of which we are each just a small part of the whole and where the benefit must result in a common good.

It’s when all these data are collected together — even the minor, insignificant things about a person — that corporations like Google use this data to gain insight and let their customer consume the data.

The challenge was now to locate this data and gain control over it. Something that wasn’t possible by using the pre-existing tools already owned by large corporations.

Her idea was to create a dome, a database of her with several other people to host on a protected resource called “the platform”. The people will take hold of their data, bargain on it, and decide what should be considered valuable and what not.

It seems she accidentally ended up creating an art project of sorts, joining several other artists and people from different walks of life examining similar problems along with the concept of data. Data is a big part, though, acknowledging how the law doesn’t cover it properly and that control should be in the hands of people who are giving up their data. Rights and limits have to be set on who consumes data and who sells it.

For isolated individual data, one can set their own prices. For data that overlaps with one another and what makes it powerful, further discussion is being held.

Jennifer has also been doing things like creative narrative fiction workshops on the side, where people make stories out of the visions they have for the world. A world where data cooperation exists and what that would be like, wanting to turn it into film and other media. She believes imagination has been lost in a world controlled by giant corporations.

The corporations have turned artists into their puppets rather than individuals with their own ideas and thoughts. Jennifer acknowledges this is, probably, what led her to look so deeply into data in the first place. She is a person with her unique background, ideas, and way of thinking, which helps her contribute multiple ways to a single problem.

She thinks some lawyers create problems while some technologists try to solve them. Artists have the unique advantage of questioning whether it should be solved at all. And while not all artists are willing to take a moral standing, the general assessment skill can be enough.

Ultimately, Morone believes a willingness to question the system can lead to changes in the system. Even one person pushing for change can motivate others to look back on their work.