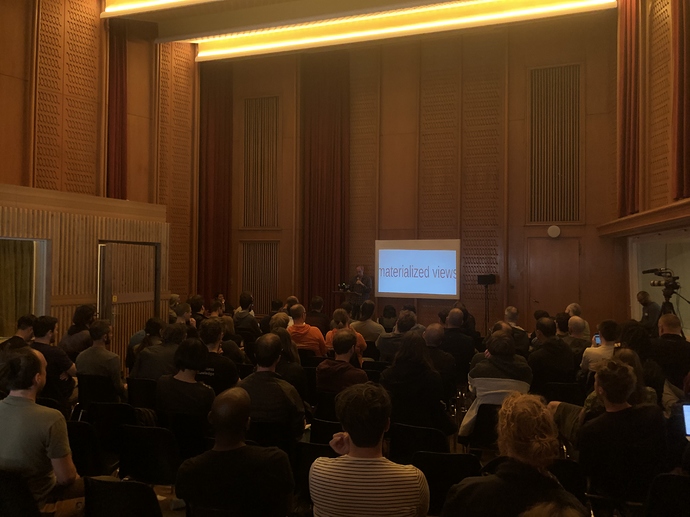 First day at the Data Terra Nemo conference. There are a lot of very interesting talks and almost everyone present is working on something that would fit hand in glove into the NGI space. This conference, barely advertised outside of the indie-web describes itself as such:

Data Terra Nemo is a technical conference for hackers and computer scientists focused on distributed and decentralized systems.

You probably won’t go to this conference unless you recognise at least some of the people and projects on the speakers list. It’s the bleeding edge of the decentralised web. To quote Alberto from a different context:

Building my own browser to explore decentralized discovery

The more I hang around the hacker community, the more I think that most of what Europe needs to build a human-centric Internet is already out there. There is a large, diverse, investment-ready portfolio of technologies, companies and NGOs, standards and principles (like ethical design itself) and, most importantly, people. If the EU were to put some of its considerable firepower behind them, we might actually get somewhere in a relatively short time!

I come away from the first day of Data Terra Nemo with much of the same feeling.

The first DTN was held in 2015, and was largely inspired by the fledgeling Scuttlebutt protocol and other technologies. In just a few years since then, that technology and others have gone from being barely operational proofs of concept to functional prototypes at worst and battle-tested fully fledged technologies at best.

Dominic Tarr, original developer of the Scuttlebutt protocol, opened the conference. I want to share some of his experiences here, since they are probably emblematic of how a lot of these radical projects get started – far away from the Siemens, Googles and Microsofts of the world.

He told a story of how Scuttlebutt was born out of the almost adolescent punkiness that grew out of the early days of Node.js and the - at the time- crazy idea of using javascript for your entire web stack, backend to frontend. There were, as Dominic joked, no grownups in the room telling them what to do.

Without getting into technical details about what Scuttlebutt is, I will let their excellent narrative documentation video speak for itself:

This video hints at something which I find to be really special about Scuttlebutt, but also to an extent Mastodon and other communities that thrive on these platforms. It is that they seem to develop a humanness, community and a certain strand of hopefulness that is very different from the evangelical naiveté of Silicon Valley. In Dominics story, he touched upon this, retelling how Scuttlebutt user Zach! had come across a new genre of science fiction called Solar Punk. This hopeful utopian genre could perhaps best be described as narrative of a society of high-tech hippies, a blend of high-tech and nature, world-wide-web and wood-wide-web (an apt analogy, used by the great Gina Giampaolo of Rumors in her talk!). This image of the future had integrated deeply into the community of Scuttlebutt, wedding technology to a hopeful narrative for a better future. That’s no small accomplishment!

I’ll write a few more of these posts on what I’ve seen at Data Terra Nemo, and I’ll try to get some people I meet involved. Projects represented here include a DAT, IPFS, Beaker browser, Web torrent and others. I will try to churn out a few more posts about these too.

Thanks for the writeup, @hugi. From what I’m getting, the DTN community is mostly looking into decentralized protocols. That meshes well with the solarpunk cultural orientation: as I understand it, solarpunk is about tech that works well when run out of small collectives, and does not need huge investment in infrastructure.

The applications of decentralized protocols you cited are mostly in the field of social media (SSB itself and Mastodon). I would also note, in passing, that these folks are innovating around business models too, since their tech is so commons-oriented. And I would like to know more about that, too.

The applications of decentralized protocols you cited are mostly in the field of social media (SSB itself and Mastodon).

SSB as a protocol is actually agnostic about what you use it for. There are implementations of chess games and book recommendation apps all running on the same SSB stream - you are probably keeping chess moves and and book notes from your network in your .ssb folder.

Wondering how (human)high-tech and nature are really going to merge!? I acutually think nature is more high-tech then human technology

tech that works well when run out of small collectives

Probably many small collectives are able to run tech - but only some are capable to create it. Examples: many small communities are able to run a server but are unable to create a server from ground up. So it will be about governance, sharing and even logistics on a global scale in order to produce and distribute tech. Open source communities lead the way. Decentralized publicly owned and managed tech production hubs may be needed (FabLab+ ?).