I am an author of an Italian online magazine called Che Futuro, which has grown to have a pretty large digital footprint. When it started there were only 30 authors, and they had an idea to quickly reach a fairly large number of people.

I think this makes sense for LOTE5 and Edgeryders in general. It is a simple way for people who want to help, but have little time, to do so; and for us to leverage the power of community into communication with a human face… or actually many of them. What do you guys think? 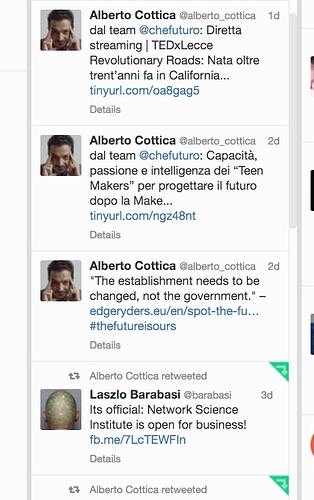 Twitterfeed.jpg459×730 84.6 KB
1 Like
Research how to make a LOTE5 distributed communication team with Twitterfeed and make an instructable for it