The last four weeks seem a bit of a blur and I’m still making sense of the conversations that took place in relation to the theme I curate. Balance is a continuous challenge; balancing ongoing work with fellowship duties, balancing online and offline activity, balancing time spent gathering information and making connections with time to synthesise all this into something useful and shareable. I will give these more attention in the coming months.

GalGael, the organisation I work with, crossed something of a milestone this month. Since @markomanka suggested I write more about our work, I thought this would make an appropriate focus for this post. Not least because it’s my observations within the context of my work with GalGael that led me to propose a theme for the Open Village festival - to explore what conditions generate health, and how this shapes our understanding of the role of citizens, policy and the state?

A little over twenty years ago, GalGael received a letter from the tax man - recognising our charitable status. A week ago we held an event to celebrate all we’d learned over the twenty years that have passed since then. Receiving a letter from the taxman, was something of an ironic landmark to celebrate as I’ll explain. As the years have unfolded, we’ve been more confident about sharing our unconventional beginnings. GalGael first constellated around a protest fire in a dark woodland on the edge of one of Glasgow’s housing schemes - Pollok; the first of four such schemes in response to inner city slum conditions. It’s an area that has been shaped by successive waves of regeneration policy, some that have recently been identified as contributing to the ‘Glasgow effect’ - Glaswegians’ higher risk of premature death.

While protesting a motorway that would cut off those in the ‘scheme’ from parkland, we learned much about how to create community in a difficult space. We had to learn how to create a place of relative safety in the midst of an area of ‘excess morbidity’. It was an exciting time; edgy and full of possibility. Videos uploaded to Youtube over the years capture some of that. We declared a Free State. We created our own passport, our own stamps, our own university.

Somehow the symbolic opened up so much possibility that wasn’t there before. Looking back now, perhaps it was our co-creation of an alternative reality that revealed our normal mode of complicity with the set of assumptions and beliefs that comprise the dominant reality or socioeconomic structures of the present day.

One of this month’s conversations with Douglas Robertson, a sociology professor at Stirling University brought me to this quote from Bourdieu; “our denial, the source of social alchemy is, like magic, a collective undertaking". Colin Macleod, my late husband, who spent much of his childhood in Pollok Park escaping the ‘scheme’, later described the Free State where he set up camp as an ‘art installation’ and a ‘leading question’.

Despite all this possibility, we lost the campaign and the motorway was built. But we had no wish to throw away all we’d learned - often through excessive hardships. GalGael was our vehicle to continue working with those hard-won lessons and shift from being about what we didn’t want to what we did want. There was a clear founding intention that this was not about establishing a charity but rather reconvening peoplehood - what it means to be a people. And that for me is why it’s a little ironic that the landmark we celebrated constitutes our recognition as a charity. Peoplehood is fundamentally about relationship, identity and culture - all characteristics that institutions, not even charitable ones demonstrate particularly well (in my book at least).

The problems of institutional responses is a thread I’ve noticed running through a number of the conversations I’ve engaged with these past four weeks. It’s been a very live issue as I’ve observed GalGael developing. There are certain pressures on an organisation as it matures to become ‘mainstream’ - often that’s how we define success. The challenge I think we’ve partly overcome is how an entity can sustain itself without becoming institutionalised. What Graham Leicester of International Futures Forum refers to in his book Transformative Innovation as a ‘creative integrity’ seems to be a more useful description of GalGael as an organisation.

Craft, relationship and conditions for health

Living in times when we have a myriad of products and services to meet every conceivable need, through GalGael we have witnessed that beyond this people have a greater need - to simply be ‘needed’ for who they are - to belong. I understand it as people who due to income deprivation cannot consume and acquire status also finding themselves dependent on institutions and statutory services to meet an ever increasing amount of their needs. No longer producing or serving our own needs and those of our families or neighbourhoods creates a devastating vacuum of meaning. This contributes to poor physical and mental health and a profound loss of self - far beyond the ‘self confidence’ prescribed for the workless by well-meaning professionals. It critically damages Antonovsky’s sense of coherence that is fundamental to health and that he defines as a person’s situation being comprehensible, manageable and meaningful. My guess is this is an epidemic that stretches into the employed population too. 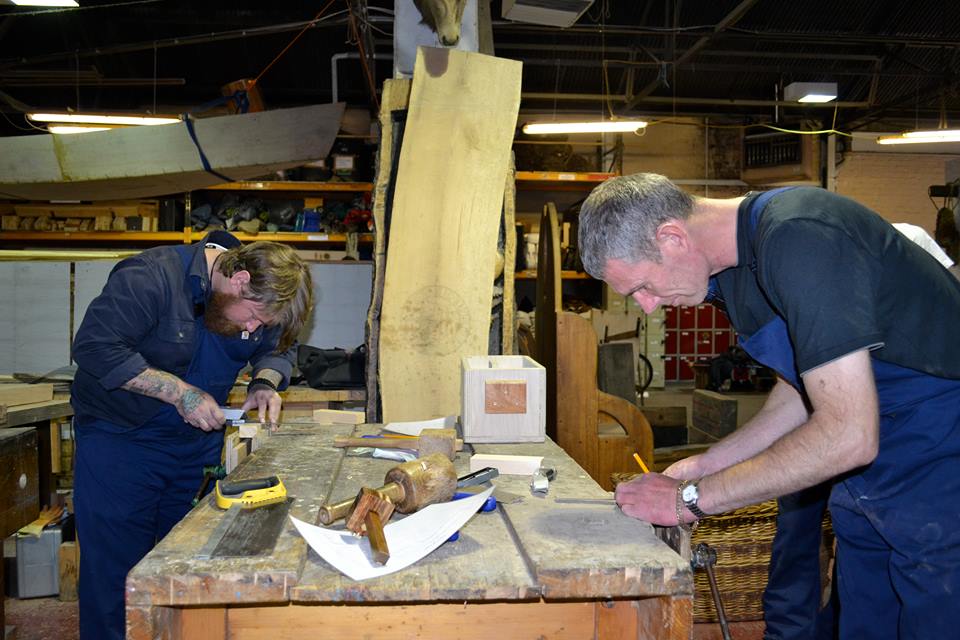 So what does this tell us about the conditions that create health and wellbeing? For us in GalGael, in our workshop craft defines our relationships. It creates a purposeful workspace where you are not objectified as the ‘service user’ in need of help but an active agent - the focus becomes the object you’re working on, often beautiful or useful, and new forms of identity get bound up in this act of creation. The sense of agency generated through the craft process is immensely important. Grayson Perry said: “craft is the physical manifestation of ‘I can change the world’” The craft gestures themselves - chiseling, sawing, hammering - create new neural pathways, working with the brain’s plasticity to erase negative past patterns. But it’s also something about the immediacy of the experience; its embodied; its not abstract that is immensely important. And that you are engaged in producing something where you have a relationship to the end use in ways that is no longer so often the case in our global marketplaces. This is of course particularly true of the boats that slide from workshop to water for both literal and metaphorical journeys. Each stroke of the oar generates not only speed but agency, coherence and meaning as you inhabit the river that otherwise passed you by. 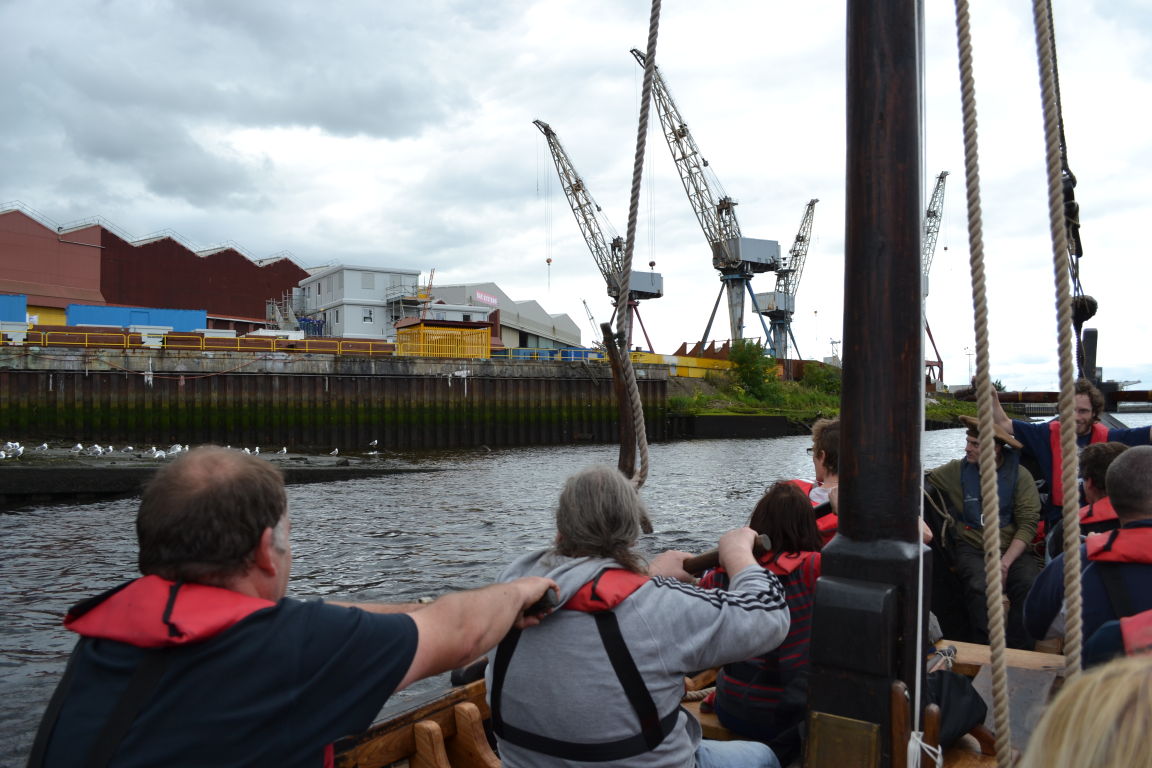 Relating where this takes us to the theme of my fellowship - I see relationships as fundamental to creating the conditions for care and DIY welfare. The nature and scale of institutions make them inhospitable to the quality of relationship called for. @matteo described the problems this causes, as uncovered through the course of Open Rampette - the detachment of legislators can lead to regulations that are hard to enforce because the lack of relationship leads to blindness in the legislation as to the realities of implementation. Quality of relationships also featured strongly in my conversations with Anthony McCann who describes himself as a ‘thoughtful practitioner’ - suggested by @dougald as someone who has been exploring care for some time. Both Anthony and Marco spoke of the problems that have been generated by a welfare system based on a trauma care model. The efficiency of a “conduit model of service” works well for emergencies and disease. The problems arise when this displaces the home care or mutual and self care that used to be common place. Illich refers to this as ‘radical monopoly’ but it’s also pervasive medicalisation of increasing areas of our health that becomes a problem, no longer the solution - in what Illich describes as the second watershed of modern times in his important book Tools for Conviviality.

So to bring this post to some sort of conclusion - quality of relationships are a condition for health. These relationships form the substructure of the architectures of love, to continue with that metaphor. I’ll finish this post with a quote from Eduardo Galeano, the Uruguayan writer, which captures perfectly the kind of relationship that underpins our work at GalGael;

“I don't believe in charity. I believe in solidarity. Charity is so vertical. It goes from the top to the bottom. Solidarity is horizontal. It respects the other person. I have a lot to learn from other people.”

As a parting thought - this quote also captures the implicit power dynamic in our relationships and perhaps this is a further condition for DIY welfare in the context of OpenCare. Either way, I look forward to more insights and learning generated through being in relationship and conversation with others through the course of this fellowship.

What a beautiful, thoughtful post! Thanks so much for sharing. I am on awe of your stamina: building a thriving community and a social business, and staying with it for twenty years, and all this on top of a fight that was lost, not won! You should be celebrating your honorary doctorate at Hogwarts.

I took the liberty of moving this onto a sub category of OpenCare. I don’t want @amelia to miss it!

The craft gestures themselves - chiseling, sawing, hammering - create new neural pathways, working with the brain’s plasticity to erase negative past patterns. But it’s also something about the immediacy of the experience; its embodied; its not abstract that is immensely important. And that you are engaged in producing something where you have a relationship to the end use in ways that is no longer so often the case in our global marketplaces.

So beautifully written, something profound in your observations on agency through craftsmanship (reminds me of this - https://youtu.be/0nxDro6THUg?t=16m20s).

Thank you! You have stated such vital points so clearly here. Really great to read this.

Your theme is really excellent. If it fits to have an entirely optional session first thing in the morning at the Open Village for anyone who wants to come share the dream they had in the night, I’d love to facilitate this under your theme. Been working with this for some years and am always amazed by way this space for expression nurtures relations and community. Let me know how best to offer - posted some thoughts after our call here Open Village Call 19 July 2017