Green houses, “expelled” from the cities

Screws instead of foundation, walls made of casings or soil, insulation made of hemp, wool, reed or cellulose, gardens placed on the roofs, solar panels and modern technologies. These are a few ingredients of some green houses built outside the cities. The owners talked about why they decided to move from the urban tumult to build and how hard the process was in Open Source Circular Economy Days Sibiu, Romania. 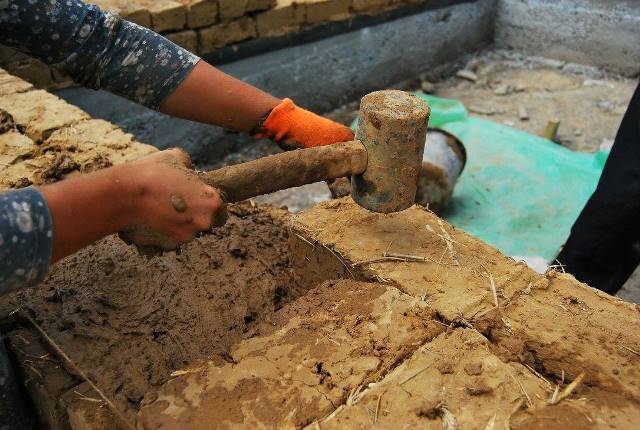 Felicia and Marius Ienculescu-Popovici built a house in Mogoșoaia, near Bucharest, taking as a guide the green houses’ principles. Recently, they have inaugurated an education center, which has a ramp made of casings instead of a wall, recycled furniture and different kinds of technologies. These are helping them consume less energy than the solar panels integrated into the permaculture garden based on the roof produce.

But they are not the only ones dreaming with their eyes open about sustainable houses, self-sufficient households and circular cities. They are joined by Flavia Matei, a young architect moved to Austria, but back for a short time in the country. She’s here again to build a house from earth bricks with the members of a deprived community from Roșia, Sibiu.

@Iulian_Ifrim is also a part of the “crazy” people’s club who think that it’s not impossible to build a “greenish” house. Consultant in social businesses, Iulian moved one year ago from Bucharest to a village near Sibiu. There, together with his wife, he started building a house as sustainable as possible.

None of the ones who had this courage chose an intravilan land. The reason is simple, they say: under the cautious eyes of the authorities from cities, they could never get the construction approvals.

Instead of the foundation, Marius and Felicia used on their new construction some huge screws, which are fixed in the ground and hold the structure. For the walls, they used lamellar wood, produced by gluing some panels made of timber of different measures and they did the insulation with wool and cellulose. Instead of the wall from the left side of the house, they built a ramp of old casings, filled with soil, which they finally covered with grass. This way, they wanted to offer stability to the building, but also an insulation more efficient. The ramp lets you climb on the roof, where they arranged a garden, based on the principles of permaculture. 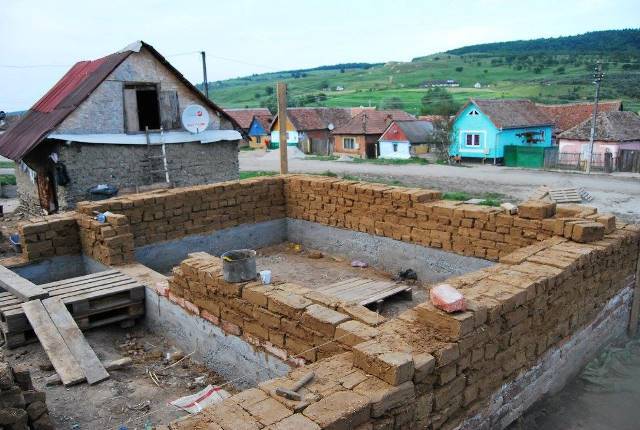 Flavia started the construction from Roșia helped by unqualified workers, even with the final beneficiaries of the work. She let them mistake and she helped them repair them. They built the foundation using river rock and concrete, the walls – made of soil bricks and straws, and the plaster – made of soil. The roof is of wood and the insulation – made of reed collected from the closely riverbed. They insulated the floor with glasses of glass and instead of the plywood, they used recycled paletts. At first, the locals were laughing at them because they were building a house made of cheap materials. But when they were shown the bricks and they realized that they are extremely strong, they started being curious. In the end, the beneficiaries will have not only a house, but also the respect of their neighbors.

Because of the phreatic line, found at a very high level, Iulian Ifrim used a classical structure for the first level of the building. He did the foundation with concrete and the masonry with bricks. But upstairs, where the water can’t get, he chose some traditional technics from Moldova. He used pillars of acacia, which he “filled” with a mixture of clay, straws and water. The plaster will be done with sand and lime, which will allow him to not use more insulation. For the loft he used wood and the roof is made of manual tiles. 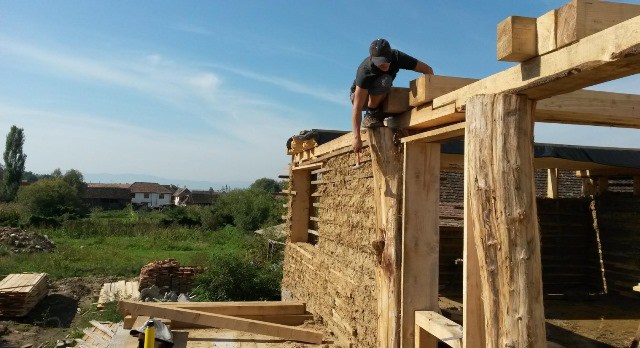 Green houses, discouraged by the legislation

In general, the reason why the pioneers of the sustainable houses choose to build outside the cities is simple. The authorisation of construction is easier to get and the verifications – less strict. “No inspector from the city would sign for a building with unconventional stuff”, say some of the prime movers of the constructions. Even though the solutions are friendly with the environment and very old, they are considered too risky for the residents of the nowadays society.

Dorin Beu, the president of Romanian Green Building Council, explained the caution of the authorities:

“The purpose is not to stop you (sustainable building), but you can’t let people have the construction falling of on their heads”. He recommended to those interested to search abroad for solutions  to experiment with and which respect the law. Beu believes that, in time, the authorities will allow the alternative buildings too and the sector will grow until it will get at an industrial level. Otherwise, he says, it won’t be sustainable.

The RoGBC president militates for the use of some good quality materials, to prevent the deterioration and to extend their lifetime. Also, he supports the modern technologies’ integration alongside with the traditional ones, for the energetic streamline of the buildings, but also the adaptation of the contructions to the local context and to the impact of the climate changes.

Green houses, a part of the cities and of the circular economy

The debate about circular cities and green houses was held within an event organized at Sibiu. It took place on the 10th June 2016, with the occasion of the Open Source Circular Economy Days international event.

The participants’ conclusion was that nobody has a perfect recipe for a sustainable house. They agreed that exactly the multitude of solutions will determine the authorities to support the alternative constructions. Until then, it looks like the best is that the pioneers find wickets in the legislation and profit from them.

This article has been translated into English by Andra Pop from an original piece on Green Report Romania.

My own documentation from the event

Is here - more a summary than a proper article.

In Romania landfilling should be more expensive so people are encouraged to organise and recycle waste. We have the lowest cost for landfilling in Europe. There is literally no incentive to recycle at mass levels. One of the biggest recycler factory in EE based here has to import trash because they don’t get enough here!!

How to think long term when planning for sustainability? People never say “build me a recyclable house”. Should we even keep constructing in cities versus …renovating old buildings? Costs are higher to redo than build from scratch, but these costs are only calculated on the short term. Policy makers, politicians, planners never think of the next 50 years, but they should.

Another way to go into sustainable architecture is what Flavia is doing, think about options for those traditional excluded? (the poor, the Roma, or in any segregated communities) This is where low cost constructions can make a difference (along the insulation - earthship range of building types).

I have an idea

Hello @Irina_Breniuc , welcome!  This is really a fantastic story. @Noemi and I are just now in the process of doing the preparatory work for a new project, in which we will look at bottom-up urban planning in some middle income countries (outside the EU). The idea is to designate some streets, square or public spaces as sandboxes, where things can be attempted with implicit consent by authorities.

I bring this up in this context because that project, too, needs partnering up with the authorities. I wonder if we could try to get a sandbox for green housing somehow, based on the negotiation skills that this other project will have to build. Is it worth trying?

Very interesting indeed. I have my personal fetish here - earthquakes. I know that Romania has this problem, and so are these houses prepared? And if yes, what are the elements, techniques that will support the house in this case?

Maybe at least these elements of sustainable architecture could be used to help cheaply support the houses in Bucharest that are famously marked with a red cross, meaning they’re likely to collapse in case of next big earthquake, which is expected more or less anytime now.

at least the ones with wood structure…

You can get the licence for woodstructure houses including for earthquackes. We don’t have licence for other tipes of houses except concrete, brics and wood (structural role) in Romania. That doesn’t mean that other materials aren’t good enough to get throught an earthquake is that is wasn’t studied and standardized (right word?)

I don’t know about the buildings in Bucharest as those were made from other materials and you need a fesability study.