It’s so cool you did this @iouxo

Had a chat with @prgrzn_10 about lots of ideas for co-creation of the artwork. One option was to agree on one frame size (ie. standard dimensions for images). So we can nicely present them next to each other or remix or whatever. The other was to pick a common theme. A third could be make it so that we make a line outline for perspective and some key elements based on the story, and then everyone can remix or whatever while keeping some coherence: 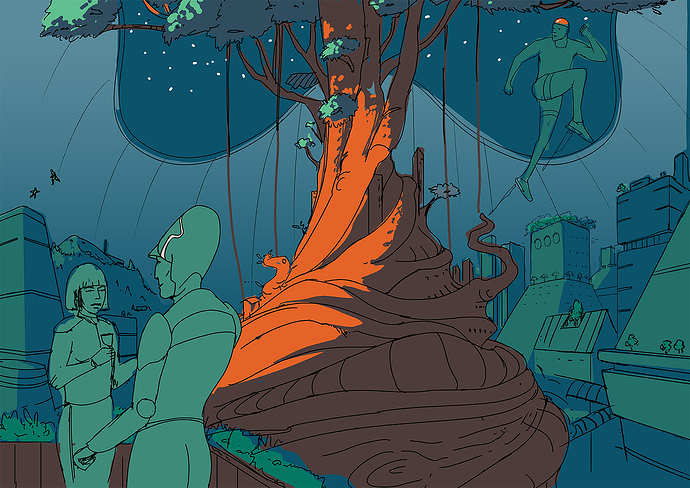 we could easily make ones based on the AI images e.g

The description of Hygge continues:

Pat Ayedemi was known to be a great teacher of the art of debate, often using the language of logic and rhetoric to bring up points that the audience would have otherwise overlooked. In the early days of the Smoothing Years, he became increasingly active in the politics of Witness and Denton’s government. As a result, he began to be seen as a key advocate for the creation of the State Machine École.

He had always been an advocate for the reform of society and for change of government. However, this is perhaps not where his passion lay. Rather, passions not known to the public lay closer to his heart, and he was a politician who was driven by them. The political ambitions that drove him are not unlike those that drive Hygge: they are not necessarily about justice or equality in general, but about making the city more just.

The memorial is dedicated to the memory of the fallen: their loss is commemorated annually. It was erected in the center of Concord City, to honor the lost. It is an open casket, with a simple marble base, set upon a small altar that stands just outside the doors. A single candle burns on a silver stand, while bouquets and other offerings sit nearby. There are flowers at every corner: petunias, irises, lilies, daffodils, carnations, and others.

A large statue is placed directly behind the front door, next to another statue, of an older woman sitting beneath a tree. Both of them are depicted holding hands. Below the feet are names, dates, and locations of memorials that have been dedicated since before the Revolution. These two monuments are the final resting places of all the soldiers who fought and died in the battle of Denton’s Revolution.

Built of wood and covered in blue cloth, this monument sits in Concord City’s square. The plaque says that this memorial was constructed by hand, to represent the dedication of the military to the Constellation as a whole.

There is a legend that says it was Goro that initiated the Memorial and its design, the erecting of the Statue and even founding of Concord City itself.

(Explanation: I fed the Hygge story into a storytelling AI and this is what it created… Not unlike what Goro would do. I just clarified some paragraphs, made the text more coherent and added the part about Goro. Hope you enjoyed this flight of fancy!)

3 Likes
Identifying and naming places in Witness: how to do it?
Goro - just a nudge unit or is there more to it?
← previous page