Identifying and naming places in Witness: how to do it?

Going through the stories set in Witness, I have noticed that not many places are named. This is starting to become a problem for the liveliness of the stories that are being written.

Right off the bat, we need to decide if Distrikts have cities or are cities. It seems that, when @yudhanjaya started drafting, Distrikts were meant to be cities. For example, the Witnesspedia entry for the Assembly refers to “the city center”; of the Covenant, we are told that “it resembles Riga, Latvia”, and so on. Only Avantgrid has a small capital city, Akur.

I propose we change this. Reason: a Witness made of only 5-6 Distrikt-cities could not underpin the economic and social complexity that we want… unless, of course. you were speaking of 5-6 megalopoles, with 10-25 million inhabitants each for Hygge, the Covenant, the Assembly and Libria. We know Avantgrid is small, as is the Dandelion Republic.

There are two possibilities:

I think I like option 1 best, but am ready to change my mind.

The description of Hygge continues: TALENTS Pat Ayedemi was known to be a great teacher of the art of debate, often using the language of logic and rhetoric to bring up points that the audience would have otherwise overlooked. In the early days of the Smoothing Years, he became increasingly active in the politics of Witness and Denton’s government. As a result, he began to be seen as a key advocate for the creation of the State Machine École. He had always been an advocate for the reform …

Indeed, when we originally started, Distrikts were MUCH smaller - but I think we now need the complexity of a Greater Delhi (30 mill people?) or a Tokyo for each Distrikt. Fairly easy to work into the canon: Witness makes landfall a couple of times (shown in our illustrations already) and picks up survivors from the 12 other unnamed floating cities.

As for names: simple. Unless we have a specific history in mind for a place and an etymology to match, we can use any of the generators here: https://www.fantasynamegenerators.com/town_names.php

Unless we have a specific history in mind for a place and an etymology to match, we can use any of the generators here: https://www.fantasynamegenerators.com/town_names.php

Ok, but you are the Architect: what aesthetics would you like us to use?

I could put cats in the visuals…just saying.

Yes, I concur with this!

So that’s the state of my rough sketch of Assembly (all green is to be replaced with edible plants, raising everything higher above water on platform, other materials for buildings. But centre is perfocrming arts centre with altcrtldel statude 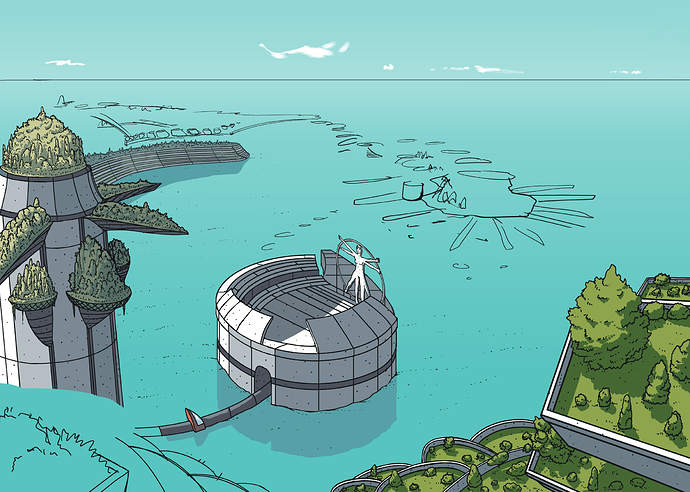 So that’s the state of my rough sketch of Assembly

That’s beautiful, @nadia. It’s a bit of Soviet modernism + some gentleness and organicness.

@alberto and @yudhanjaya I’m now writing and recording script for immersion video with which we will open event on 29th. Am thinking about how to introduce edgeryders. Seedling of the state machine? 21st century organisation/tribe that set in motion what Denton would then go off to realise? Voice of God?

Would that one had the voice of Morgan Freeman.

Am thinking about how to introduce edgeryders. Seedling of the state machine? 21st century organisation/tribe that set in motion what Denton would then go off to realise?

Ha. Had not seen that one coming.

But no, I think: Denton is a product of Project Viking, so he is a high UN bureaucrat. In the canon, Witness is not the brainchild of bottom-up movements, but of top-down IGOs.

so what, a cult of which denton was a part?

No, Denton’s trajectory is consistent with his belief that the right way to run a society is by enlightened technocracy and multistakeholder approach. I do not know how to introduce edge culture here. There are fragments everywhere: in the decentralized approach of the Assembly, in the near-survivalism of Avantgrid, in aethnography itself.

ok equivalent of conference of Europe where he first comes across idea from edgelings? Then runs with it?

I only named a single place in Avantgrid, and that’s Akur. It is the Icelandic word for “field”. But it would be weird for Avantgrid names to be overly influenced by an a tiny arcane Nordic language.

Actually, I could imagine there being many different competing nomenclatures in Avantgrid. Originally most of the islands were named by Librian super-rich as resort locations, so they probably had corporate names to begin with, or names to sell some experience. There was probably a “Lion Island” and “Wolfisle” for big game hunting experiences, as well as a nostalgic “Ultima Thule” Viking theme park or an “New Maui” complete with a fake little volcano. Librians probably hold on to these names, sort of like the older generation of colonialist English who still call Zimbabwe “Rhodesia”.

As for how the islanders themselves name places, I would expect there to be a culture of choosing rather understated, simple but poetic names. There are probably plenty of little villages called things like “Lakeside”, “Pinewood” or “Morning Dew” - and sometimes variations of that in different languages. And seeing that it’s a refuge for Orthodox religious types, there are probably a hodgepodge of places named after saints and holy people. I could imagine there being a “Seraphim Temple” in the village of “Nachman” or a “ Chapel to our Lady of the Waves” at a settlement called “Krishna” (Avantgridi probably having a wide range of mixed up belief systems, as often becomes the case in places there is both a mix of cultures and isolated communities).

please not ultima thule though