We are still in the early days of assembling the corpus of the TREASURE ethnography via interviews. But it’s useful to have an early check on the data, as already a respectably-sized trove of data has been collected.

We have induced the network of codes-co-occurrences from this early stage TREASURE corpus. The nodes of this network are the ethnographic codes; two codes are connected by one edge if at least one post has been coded with both codes. We interpret co-occurrence as association. Co-occurrence edges have two properties:

In this early stage, the co-occurrence network of the TREASURE corpus has 113 nodes representing codes, and 817 edges. This makes for a network that is large, dense and difficult to interpret visually: 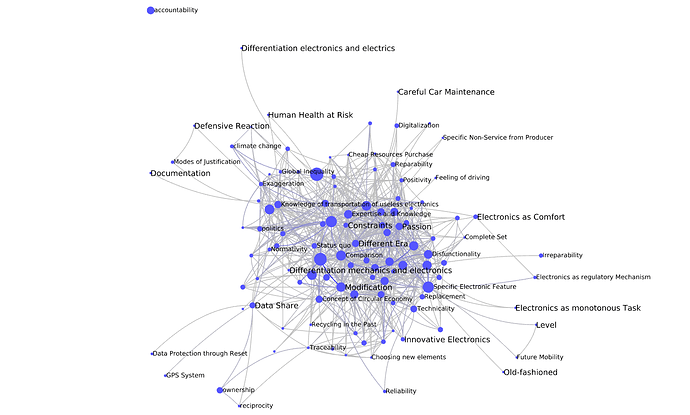 In all figures, node size represents the number of times that particular code occurs in the corpus (it varies from 1 to 57; the code perception of recycling is the most widely used, with 57 occurrences). Edge color represents association depth d, with bluer edges encoding higher values of d. The deepest edge (d = 15) connects perception of recycling with modification.

This network has a clear core-periphery structure. In order to interpret it more easily, we find it useful to reduce it by filtering out the more shallow edges. In the figure below, we have selected only the edges with d >= 6: 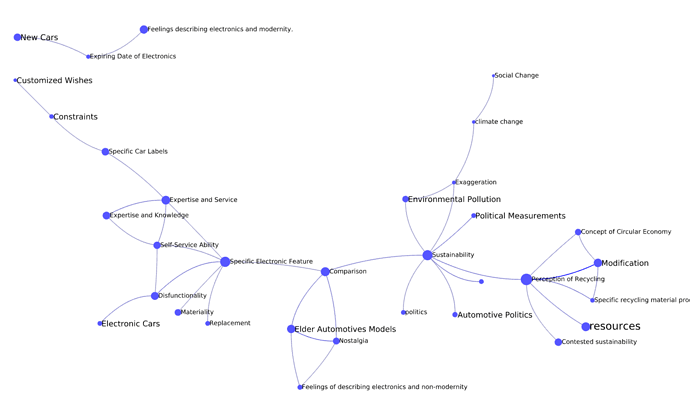 A chain of connected clusters appears here quite clearly.

To the right, a cluster of codes representing the way drivers try to make sense of the concept of circular economy, with perception of recycling at its center. Moving left, we find a cluster surrounding sustainability: it is clear that our informants see it a technical-political issue, not just a technical one (politics, political measurements). Further left, we find the very intriguing code comparison. The ability to compare seems to be a key enabler for drivers to push the industry in the technological direction they want it to take, and this leads to a conversation about older vehicles, products of a different era where repairability (if nopt necessarily recyclability) where more important than they are now. To the left of that, we find a cluster of codes that seem to point to possible ways to a better circularity, hence sustainability, of motor cars: replacement, materiality, expertise and service, self-service ability, but also dysfunctionality, that seems to point to a critical attitude of informants.

This looks really great! @SiriK – does @alberto 's overview align with how you were using the “comparison” code?

Thank you so much @alberto sharing this first step of visual insights representation! It really looks great! To reply to @Nica’s comment/question about the code “comparison”: I found interesting that feelings, emotions and ideas about circularity, recycling and sustainability in the context of automotive was often brought up in comparison to elder car models, politics, times, styles, circumstances etc. With this code, I tried to create a comparison surface. This provides information about identifying aspects and, at the same time, clearly distinguishes them from other features. And the comparisons themselves can vary, which, again, I found exciting. I also tried to do the same with the codes “conditionality” and the pair positivity/negativity. The code “conditionality” emphasizes the conditions to which statements/perspectives on the choice of cars, their characteristics or maintenance can be bound. The latter should not only be seen as a valuation. It should instead provide information about how or to what extent they are regarded as such.
I hope I was understandable with my explanation - at best, I can try to express this more comprehensively.

I found interesting that feelings, emotions and ideas about circularity, recycling and sustainability in the context of automotive was often brought up in comparison to elder car models, politics, times, styles, circumstances etc.

Might we be looking at the crucible where sensemaking happens? At “wait a minute, all this electronic stuff looks sleek and modern and convenient, but it turns out there is a price to pay, and we see it against the baseline of the 1970s or so idea of what a car is”?

That makes sense to me @alberto – this may be useful to think about (and see if subsequent batches of interviews reinforce this) in terms of, is “circular economy” thinking aligned more with aspirational futures or more “good old days”? That will be helpful to consider for actionable insights for the eventual report coming out of this.

@SiriK – one thing I am curious about is something I saw in the first batch of interviews that I “pre-coded” (from Technorama) – this tension between individual choice and feeling of being controlled/lack of agency. I see when looking at your codes that you have 14 instances of “feeling of external control” codes – did that tension show up less in subsequent interview batches, or did you deal with it a different way with coding? I was curious whether this autonomy/control mapped at all onto this juncture of “comparison” that is extremely interesting?

@Nica: I used the code “feeling of external control” less as - you already pointed it out - this tension of being unable to decide or regulate as an individual or car owner has not expressed the way it was used in previous batches. But it continued to show up in a few interviews. I would nevertheless claim that compared to the earlier interviews I currently worked on, the critical attitude of powerlessness to be at the mercy of something was less pronounced. For this, I switched to codes like “Global Inequality”, “Attention”, “Consciousness”, or “Awareness of Inequality” because a critical reflection and own action (i.e. solution-oriented and with an agency) were more central.
This could fit that forms of indifference, passivity, and active influence act as a hinge for the code “Comparison”.

I finally finished KREFELD and will continue working on the remaining batches and events.