On 2 May 2018, the European Commission adopted its proposal for the next multi-annual financial framework covering the period 2021-2027. The proposal demonstrated the Commission’s increased ambition concerning climate-related activities and proposed to spend 25% of expenditure on such activities, amounting to EUR 320 billion, to be mobilised through the EU budget. The Commission later adopted, on 29 and 30 May 2018, its legislative proposals governing the use of cohesion policy funding for the same period. One of the main objectives which will drive EU investments in 2021-2027 will be a “Greener, low-carbon Europe, by promoting clean and fair energy transition, green and blue investment, the circular economy, climate adaptation and risk prevention and management” implementing the Paris Agreement. According to the Commission’s proposal, a significant share of cohesion funding will focus on this priority. It will be essential to confirm that share in the ongoing legislative process. On 11 December 2019, the Commission adopted a Communication on the European Green Deal, setting out its roadmap towards a new growth policy for Europe.

This growth policy is based on ambitious climate and environmental objectives and on participatory processes bringing citizens, cities and regions together in the fight against climate change and for environmental protection. In line with the objective of achieving EU climate neutrality by 2050 in an effective and fair manner, the European Green Deal proposed a Just Transition Mechanism, including a Just Transition Fund, to leave no one behind. Funding will be available to all Member States, while focusing on those regions and sectors that are most affected by the transition given their dependence on fossil fuels, including coal, peat and oil shale or greenhouse gas-intensive industrial processes. The fund will support workers, companies, and regional authorities, encouraging investments that facilitate the transition. 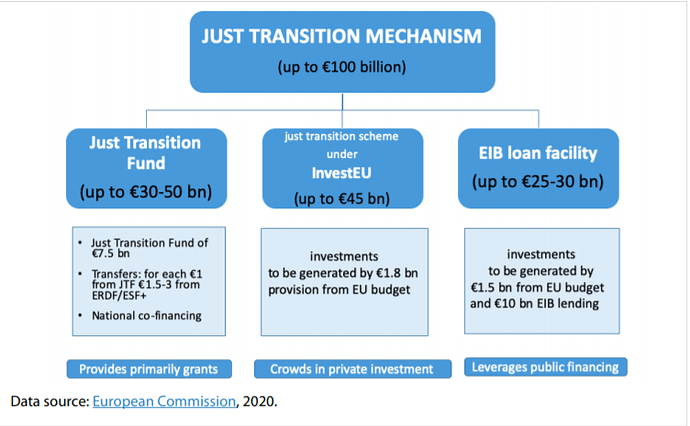 The Just Transition Fund will be implemented under the cohesion policy. Its delivery will follow the amended Common Provisions Regulation and be included in partnership agreements and programmes. The JTF’s own specific budget will be complemented with resources from the ERDF, ESF+, or a combination of the two, through obligatory transfers. The total of ERDF and ESF+ resources transferred to the JTF should be between 1.5 and 3 times the amount of the JTF budget. In order to ensure continued impact of cohesion policy, the resources transferred from either the ERDF or ESF+ cannot exceed 20 % of the respective ERDF and ESF+ allocations to any individual Member State (new proposed article 21a of the amended CPR). Member States are also expected to provide funding of their own, with levels of EU co-financing depending on the category of the region in which the ‘just transition territory’ is located. The remaining two pillars of the Just Transition Mechanism – the InvestEU scheme and the EIB loan facility – will have a broader geographical and thematic scope than the JTF, being available to territories outside the ‘just transition’ zone, on condition that projects are beneficial to ‘just transition territories’ – for example, transport or energy infrastructure projects that improve the connectivity of these territories. The two pillars will also cover a broader range of activities, for instance district heating and gas networks, energy efficiency of buildings, energy and transport infrastructure, and social infrastructure. The Just Transition Fund will primarily provide grants. The InvestEU scheme will seek to bring in private investment, whereas the EIB loan facility will leverage public funding.

The Just Transition Fund will only finance activities that are directly related to its specific objective and that contribute to the implementation of the territorial just transition plans. It will support workers, companies, and regional authorities, encouraging investments that facilitate the transition. The activities supported are restricted to a) productive investments in SMEs (including start-ups) that lead to economic diversification and reconversion, b) investments in the creation of new firms, including support for business incubators and consulting services, c) investments in research and innovation activities that foster the transfer of advanced technologies, d) investments in the deployment of technology and infrastructure for affordable clean energy, as well as in greenhouse gas emissions reduction, energy efficiency, and renewable energy, e) investments in digitalisation and digital connectivity, f) investments in regeneration and decontamination of sites, land restoration, and repurposing projects, g) investments that enhance the circular economy, including those that promote waste prevention, reduction, resource efficiency, reuse, repair and recycling, h) upskilling and reskilling of workers, i) job-search assistance to jobseekers, j) active inclusion of jobseekers, and k) technical assistance. The fund may also support investments in enterprises other than SMEs, and investments aimed at reducing greenhouse gas emissions resulting from activities listed in Annex I to Directive 2003/87/EC (EU emissions trading system – ETS), as long as they have been approved in the territorial just transition plans and are necessary for the implementation of those plans.

The Just Transition Fund will provide support to all EU Member States, while concentrating on those territories and regions where the magnitude of the climate transition is larger. The allocation method is based on objective and clear criteria.

As the JTF should contribute to mitigate the socio-economic impact in the regions and sectors most affected by the transition due to their reliance on fossil fuels or energy intensive industries, the criteria reflect the relevant economic and social indicators of the Member States and regions concerned:

The economic criteria (GHG emissions, production of peat, production of oil shale) and the social ones (employment in coal and carbon intensive regions) weigh 50% each in the calculations.

In order to ensure an appropriate concentration of resources on the least developed Member States, GNI per capita is also factored in. The national shares of the allocation are increased or decreased to reflect the difference between the national GNI per capita and the average EU GNI per capita.

Secondly, an upper limit is introduced to prevent any single Member State receiving an excessive share of the JTF resources and ensure a fairer and balanced distribution between Member States. The upper limit fixed at €2 billion.

This allocation method helps ensure that the distribution of funds is sufficiently concentrated on Member States where the challenges are most important, while offering a meaningful support to all Member States. Notably, the Member States with a GNI/head lower than 90% of the EU average would receive about two thirds of the JTF funding. 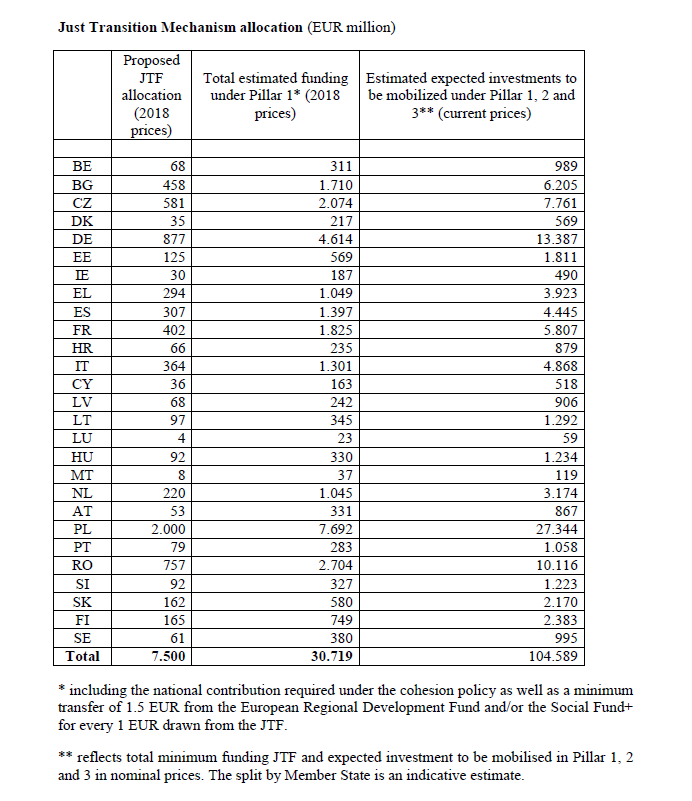 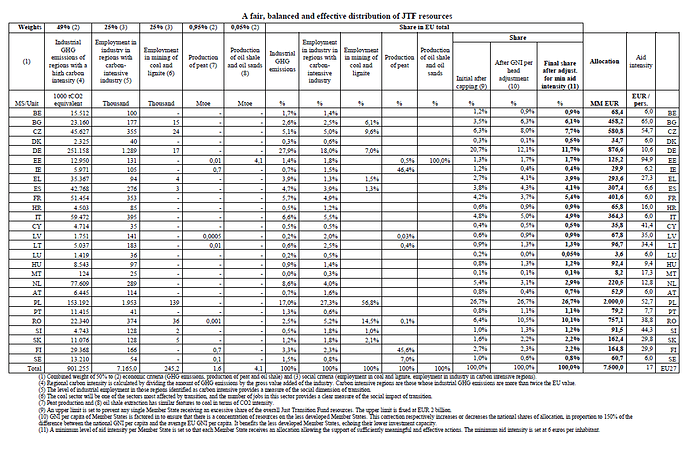 Hi Andreja, thanks for this - were do you see a good entry point/match/ way we could participate in this?

Since through the Just Transition Fund will be only financed regional activities that contribute to the implementation of the territorial just transition plans, we could be a partner in projects, especially those related to economic diversification and reconversion, research and innovation, regeneration and circular economy, but we can also provide consulting services, technical assistance, etc.

The EU is taking steps to achieve its goal of a climate-neutral economy by 2050 in an effective and fair manner. Today, EU ambassadors endorsed the Council’s partial position for negotiations with the European Parliament on establishing a Just Transition Fund.

The aim of the fund is to reduce the socio-economic costs for those communities that are less equipped to meet the challenges of the green transition. It will focus, in particular, on regions and territories which need to phase out production and use of coal, lignite, peat and oil shale, or transform carbon-intensive industries.

“The Just Transition Fund is a fundamental part of the European Green Deal and indispensable for its success. It will play a key role in ensuring that we tackle climate change together as a Union, in a spirit of solidarity between member states and regions, so that no one is left behind.”
Marko Pavić, Croatian Minister of Regional Development and EU Funds, President of the Council

The Council’s position is partial because the financial resources and budgetary provisions are excluded from the negotiating mandate and not yet part of the Council’s position. The final amount of the fund will be decided when the EU’s long-term budget for 2021-2027 is adopted.

In line with cohesion policy rules, the funding support will be made available to specific European regions and territories so that these can diversify their economies, create jobs and help people acquire new skills and competences.

The scope of the fund, as endorsed in the Council’s position, also includes investment in SMEs and start-ups, research and innovation, transfer of advanced technologies, affordable green energy, as well as decarbonisation of local transport.

On the other hand, nuclear energy, tobacco products and fossil fuels are fully excluded from the scope of support.

The text of the Council’s partial mandate will be issued tomorrow, 25 June.

Next steps: Once the European Parliament has agreed on its position, negotiations will begin between the two institutions with the aim of reaching an agreement.