(Making a ) Living On The Edge - Steve Lawson

I met Steve Lawson AKA SoloBassSteve at an Amplified event when I was investigating new formats for Citilab. He was so enthusiastic about everything it made me sick

Later he was part of an Amplified team that came to work their magic on PodCamp Barcelona, and I saw his great skills at close hand. He and @Documentally have been two of my biggest influences on the use of social media to, well, amplify things.

(btw the video failed in the recording so I’ve replaced it with footage of Steve playing music - “the soundtrack to the day you wish you’d had”, as he puts it. Make sure you watch/listen to the video - there’s so much more detail in it as there is with all the videos in this series 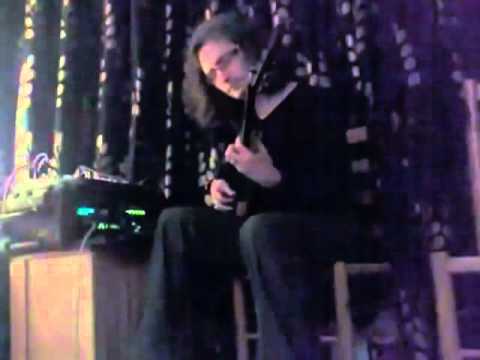 Steve is ostensibly a musician, although he says his way or making a living is more a  portfolio thing. “I get paid to be curious”, he says. adding that the musician bit is integral, the centre of the wheel.

He had a conventional music career after college - playing music with other people, doing tv, radio and theatre. At end of the 1990’s he played a solo show, recorded it & put it on his website - “people asked “when is the album coming out?”” At the time he was a music journalist and knew there was no money in recording a solo album as a bass playing instrumentalist, people who did it, did it as a loss-leader. Steve realised that making records was cheap and somebody was siphoning off lots of money, so he recorded his first album on a mini-disc. It sold and broke even very quickly and then started to make money. The conversation he was having with his audience made him think there was a sustainable way of making music outside of the mainstream music biz.

Sustainability became the key, he says . Musicians are normally told that they are not quite big enough yet, but doing it himself meant that nobody was telling him what success looked like. People started contacting him about gigs and he did a lot of the booking himself because he knew from being online that there were people in certain areas who would show up to concert and that 15 people paying 10 pounds each is 150 pounds,  the same as he would get for playing at Shepherd’s Bush Empire. The industry was always more about making “someone” lots of money rather than you being able to live but he was discovering that he could make a living. He points out that he was lucky to be in his late 20’s and not a teenager or he might have succumbed to typical idea of success.

Stere had an emerging portfolio career. He had a great network of people he’d met through being a journalist. Also he was teaching so he had a profile as a teacher and a writer about music education and it became apparent that the aim was not to be a “full time musician”. Plus it was more stable as a lot of the tech industry collapsed around turn of the century and a lot of people were out of work. Because he could switch between teaching, writing & playing, he only needed one thing to be paying the bills at any time.

Although he was worried about Napster at the beginning and didn’t use BitTorrent, the more the industry complained about these things, the more he thought they must be good if they hated them so much. Due to their history of never supporting artists, being monopolistic, abusive - a protection racket more than anything else, if they said it was their destroying their business model, Steve thought there must be something in it. As technology spread, more people were finding his work because he was visible online and he began inviting people to download his music and pay what they wanted for it. In part this worked because the industry was treating downloads as if they were cd’s and they were priced as if a physical object was created. This then became another story - there was the story of the music and the story of the access to the music and it functioned as marketing used to.

It also enabled the musicians to be able to talk about their own sense of gratitude that people listened as in the past the it was considered a bad thing if someone wanted to listen to you unless they paid. All of this happened off the way social media enabled musicians to talk to their listeners. Steve was using his website as a social media forum before social media was known and when Twitter came along he moved over and his community moved with him. He became a kind of music conduit within the community, becoming a fulcrum around which music makers and listeners discovered each other and music makers discovered that they were also music listeners too. He can generate sales of other music by his recommendations and thinks that in the near future this will be the main way people discover music. Steve mentions that he took his music off Spotify for many reasons around their model and cites Bandcamp as much more creator friendly.

Although he stopped being a journalist, Steve continues to write mainly as part of Amplified - a social media facilitation project which developed from the Tuttle club in London, where a group of geeks who liked social media got together weekly to discuss what that meant for art, politics, education, business etc. Los of events were taking place but the sole outcome from them was the guy on the platform talking. But the interesting stuff was people talking over coffee, so they came up with a system for documenting that, of shaping events around that other kind of output. It became a key thing, allowing Steve to solidify his thoughts about how social media works and the necessity of having a multiplicity of voices. This tied in with a widening of access to the tools of dissemination and creates situations where you have a brilliantly diverse culture of people making small scale contributions to what is going on, but when summed together is really important. “We were hoodwinked for the latter half of the 20th Century, with the lie that the only thing that mattered was numerical success - as musicians, in the media, in organisations, and we lost the ability to think with any integrity about what we were doing and do it because it was important, not because it was successful”. The Internet allows us to reverse that and to find other small groups of people who are challenging the same issues he says.

It meant that in terms of making a living, as what could be broadly thought of as a social technology consultant, Steve was able to work on lots of little projects and make a living, rather than trying to make big money. Big money consultation for government tends to mean that the government doesn’t invest in ongoing work - they feel they’ve had their 1 day consultation with an expert, they’ve spent their budget on that and then continue to act as before, he explains. Steve was more interested in spending weeks at an organisation and completely changing the culture of how they use the Internet, rethinking transparency and opening up the sense of their core message to users, constituents and stakeholders.

To be part of a counter-culture to the entrenched positions and power structures doesn’t have to mean marching in Whitehall, being part of modelling a different way of doing things is really important, and to be able to do that and make enough to pay the bills most months is a good thing, Steve says.

The power of the late 20th Century success myth of Hollywood and the record industry gives these players incredible power in debates about Internet legislation. History is written by the winners so the account of what the record industry has meant to the world in the last 60 years has been written by the record industry, not by the millions of people who have been failed by it, Steve points out. So they show twisted statistics of what they made before and what they make now and say it’s all because of the Internet. But people are choosing other forms of physical entertainment media - games, DVD box sets etc meaning that music has lost out to other forms which look like better value. Also games and box sets are full of licensed music which they never talk about.

The sales peak in the late 1990’s was people replacing their vinyl and cassette collections on CD, and a vast amount of money in the industry is about archive recordings. Outside of the official figures there is also a secondary economy of people like Steve whose sales are not registered by “official” bodies. The other thing the industry ignore is that the cost of making records is a tenth of what it was for the equivalent quality 20 years ago. Art making doesn’t have to be speculative.

The record industry has an enormous amount of money for lobbying, and Steve remembers that MP Tom Watson said he’d never seen more money spent on a lobby than that around the UK’s Digital Economy Act. Leaked memos showed the extent of their manoeuvres. “The big problem legislatively,” Steve says, “is that they do start to influence laws to make it impossible to do what we do. They don’t want a level playing field.”

Steve has a big problem with the model of Internet services that are provided for free while mining and scraping data and selling it to governments and advertisers. He would prefer to pay for services, thereby having services which provide meaningful conversation instead of having models based on data sale. Those services would then be more focused on, and useful to the user. If the selling of data is the business, and many users find it unacceptable, these companies will be become more pernicious, hiding what they are doing. He hates the fact that services surround his music with advertising and that makes it viable for him to make music - “I’d prefer a position where people can pay for the music they like, not pay for the music they don’t like, share it, be part of an economy or an ecosystem that wasn’t just about paying or not paying.”