Many places in the world celebrate May Day with protest, direct action, strikes and riots. In many places it is even an official state-sanctioned public holiday! In many other places alot of people call in sick or go on strike, because May 1, perhaps of all calendar days, is a day not to work, a day no one should have to sell their lab…our to make money for their bosses.

Why? Because big unions in the US decided, finally in 1886, that the 8-hour-day would come into effect from the 1st of May, 1886. So on that day millions went on strike. 400,000 in Chicago alone where anarchists were at the forefront of the union movement.

But capital and the state had to stop all this nonsense before it realised any revolutionary potential, so they sent in police to attack striking workers and force them back to work frown emoticon:( At one such police attack, a worker was killed and many severely injured when 200 police just started beating people with clubs and the buts of their firearms frown emoticon:(

So the following evening, workers from all over Chicago met peacefully at Haymarket Square to listen to three anarchists give speeches. Even the Mayor of Chicago attended! And he even gave orders to police to go home for the evening as everyone was peaceful and injured.

But police just couldn’t help themselves. Just as the meeting was ending, 180 police under command of the very man who was told by the mayor to go home, arrived and “ordered” the crowd to disperse. Perhaps outraged by the police killing of a fellow worker and dozens injured by police the day before, or perhaps an agent working for police, an unknown person throw a bomb at the police, killing one and injuring 70 others, six more police later died. Police opened fire on the crowd. It is not known how many were killed or injured frown emoticon:(

And so followed months of state terrorism against the workers of Chicago. The media and conservative factions of the state blamed “socialists and anarchists” for the bomb, though no one even knew. The state’s attorney himself publicly gloated “make the raids first and look up the law afterwards!” Private homes, meeting halls, newspaper offices, nothing was spared the raids, many were arrested arbitrarily, attacked at work or in their sleep.

Eventually the state charged eight men (including the three anarchists who were giving speeches that night) with “accessory to murder”. A special trial was constructed at the whim of a bailiff appointed by the corrupt state attorney, in which the jury was made up literally of capitalists and a relative of one of the dead policemen. The defense was not allowed to present evidence and the special bailiff public proclaimed “I am managing this case and I know what I am about! These fellows are going to be hanged as certain as death!”

The state could not supply any evidence that any of the men were connected in any way with the bombing. The trial in fact revealed that 5 of the anarchists had not even been in Haymarket Square at the time, the other 3 were giving speeches, one of which brought his children to the meeting, not suspecting any violence, let alone a bomb. Even the mayor gave evidence in support of the 8 Chicago anarchists on show trial.

But even facts and legitimacy weren’t to stop the tyrannical terror of the corrupted officials. The state’s attorney sumarised to the show jury: “Law is on trial. Anarchy is on trial. These men have been selected, picked out by the Grand Jury, and indicted because they were leaders. There are no more guilty than the thousands who follow them. Gentlemen of the jury; convict these men, make examples of them, hang them and you save our institutions, our society.”

It was capitalists using the state to kill anarchists to make examples of them to crush people oppressed by capitalism everywhere frown emoticon:(

In August 1886 seven of the eight anarchists were sentenced to death by hanging. A massive international campaign was successful in reducing the sentences of two of them to life in prison, and one killed himself whilst imprisoned, so in November, 4 were hanged, 3 of whom had given speeches that evening.

Years later, evidence came to light of a possible conspiracy, that an agent working on behalf of the policeman in command of the police who were bombed, may have been the one who threw the bomb, at the request of steel business owners in an attempt to discredit the labour movement. By 1893 the three anarchists still in prison were finally released, the governor acknowledging that they were the victims of “hysteria, packed juries and a biased judge”.

August Spies, one of the anarchists who gave a speech that evening and was later hanged, said before his death: “If you think that by hanging us you can stamp out the labour movement… the movement from which the downtrodden millions, the millions who toil in misery and want, expect salvation - if this is your opinion, then hang us! Here you will tread on a spark, but there and there, behind you - and in front of you, and everywhere, flames blaze up. It is a subterranean fire. You cannot put it out”

And so to this day tens of millions, sometimes hundreds of millions, all over the world, refuse to make money for their bosses, and take to the streets against the tyranny and terror that is capitalism, and likely will, until our lives are rid of it, forever." (Nick Carson, via Conduit) 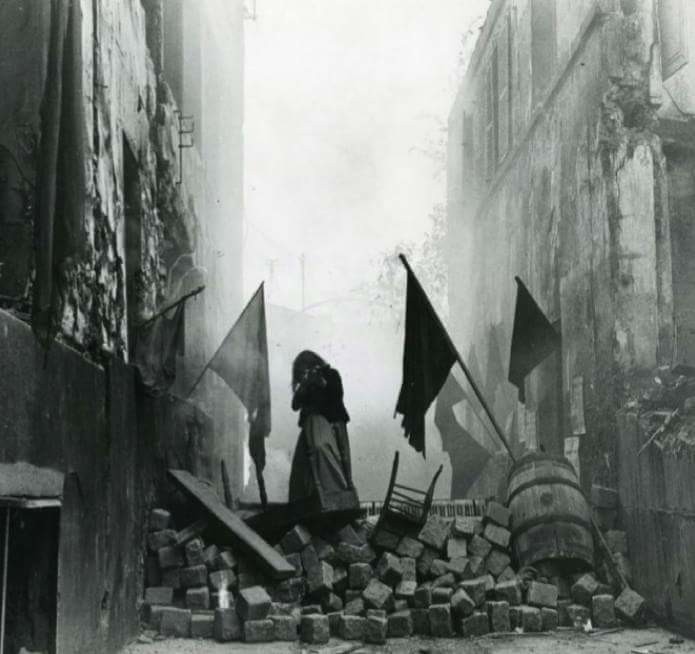 Thanks for posting @zazie, collective memories are not always long ones. No matter where we are on the ideology spectrum, it’s good to keep in mind how things start and their significance.

Too bad among many groups I’ve seen as I was growing up, this has become a motive for celebration without substance i.e. a reason to plan city breaks and go off into extremist consumerism… Well.

more on anarchism and May Day

Thank you so much for reminding us about the origin of this day and how offensive and violent States have been. Arte (the French/german TV channel)  just released an amazing documentaries on anarchism (in French and German)