Meanings of transition in the words of Edgeryders

On Wednesday, the Strasbourg arm of Edgeryders met to go through the personal stories, that those of us active in the game have posted as part of the Share Your Ryde mission. The aim was to try for the first time, and document, the process of going from individual personal stories to policy. We began with a discussion about the general hypothesis and objective of the project team, moved on to go over the project’s objective, methodology and constraints and proceeded to discuss the actual material in detail. Like with any content, there are different levels of reading it and I would start with the most general one in this blogpost: setting the stage. Before moving forward with the analysis, we want check how much of the below resonates with the community, and so we ask the community to please read and comment on this post. Gilda, Alberto, Nadia, Audrey and I (Noemi) had been reading stories as they came in, but going through them as parts of a whole makes visible where individual trajectories converge, and helps us identify themes and issues especially relevant to Edgeryders as a community that ought to be explored from a policy perspective.  It also helps us make better sense of who we Edgeryders are as a community, how we position ourselves in the world. This is important as we are building bridges with institutions and need to frame the outcome of our interactions on the platform in contexts and language that Institutions can “take in”. 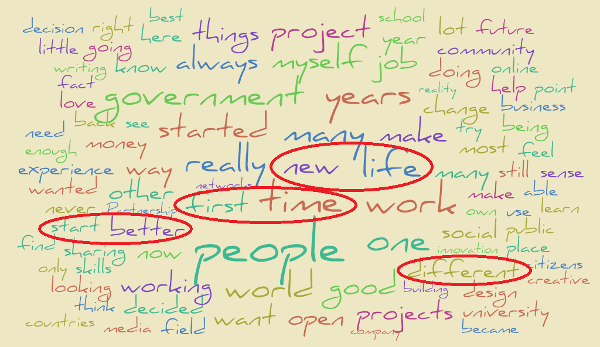 So far we know we would like to build a case that that there is an important minority of young people that are well-meaning and moving in a different direction from the mainstream but obviously acting for something we can recognize as common good. If we can make this case, this would go a little step towards de-stigmatizing the discourse on young people. Yes we may be calling into question institutions like universities or governments, but we are in the space of doing good and cannot be dismissed. Edgeryders is useful if also senior decision-makers can see that these people have a contribution to make.

The first observation from reading the stories is that we are not apathetic, we’re not cynical and we’re not resentful, as some portrayals of European youth imply. Rather, in our search for finding a place in this world from the stories it seems we are ludique in approaching life. I think at least for some of us the “life is like a box of chocolates” metaphor fits perfectly. If nothing else in we think it is visible in the rejection of very specific kinds of knowledge;  Edgeryders seem to be mixing experiences and knowledge, making use of multiple resources and multiplicity. A second observation is that Edgeryders seem to be building a socialised world, one in which we are able relate to one another as peers and help others through collaboration, coproduction, sharing. In several of the stories we read an understone of “ I am alone now, but I wont be in the future”. A general tone of seriousness is there, sometimes even coupled with sadness because some or most Edgeryders live precariously and feel personally responsible for our transitions; responsible enough to be able to make sometimes painful changes. Take for example Rossella, Jorge or Neal, they all gave up a rather secure, comfortable life – in economic research, IT or consultancy – to work in environments which are more in accordance with their own ideals, moving beyond the conventional models of success. It seems that comfort resulting from conventional paths does not make sense for some of us (“jobs with no sense”) indicating that being comfortable is not a stand-alone objective. According to standardized models of success, “the success models of our parents” as Paola put it, veering off a set career track is considered being irresponsible.  According to a new, emerging model that Edgeryders reveal (see Andrea’s take on decision making), going off-road when the road feels unsustainable is an act of courage.  This kind of responsibility seems part of what made people like Alberto, Di, Andrea, Jorge, Rossella or Neal move outside the box and take up risks. And this risk taking is not only tied to some of us being social innovators, but also inherent in the ability to be surprised by life, in “curiosity and openness”, and most of all in appreciation of learning. What do you think, does any of the above resonate with you? Have we gotten something wrong or misinterpreted it? Let us know by posting a comment below!