Meet Pawel - A Hacker with a Story to tell

He was involved in coding the first applications for e-id. The Estonian government set them up on an island and gave them three days to code something. He was a part of the project which made signing any legal contract online easy - which could even allow setting up a civil union in a form of company from a country that forbids such relationships. According to Pawel, the idea originated from a Chinese man who wanted to have a legal structure for sharing assets with his male partner and being able to inherit after each other in the People’s Republic.

Pawel gives cybersecurity lectures and workshops to high schools, universities, and NGOs - a topic that is not covered in any official curriculum. This year working with the public sector became much harder, as this Polish government, known for its anti-homosexual tendencies, started policing schools in fear of “homopropaganda”, meaning: all non-official lectures.

For the past few years, Pawel has been studying narratives around technology in our culture and started working on a graphic novel telling a story of a hackerspace. He noticed that the language we use when talking about hacking, changing tech is very alien to most kids and non-technical adults. A lot of them believe that devices are more “discovered” than “invented” - seeing Steve Jobs not as a CEO, marketer, or designer, but as a “great discoverer of iPhone”. In order to explain free software or open-source, we need to address the most basic conceptions of what is a technology - and that by its definition, it can be changed.

His idea for such a narrative is focusing on people who cannot use the same technologies as most of us, often for no other reason but the designer’s laziness. It’s much easier to understand a person born without her right hand struggling to use a photo camera than a hacker modifying a library for their own satisfaction. From there, a story can be easily spun, showing a need and a way to address it.

Such stories need not only a new kind of narrative but a new aesthetic as well. A lot of current stories about technology follow similar cliches, typecasting people into known roles and forgetting about diversity and inclusion. The reporting of real stories also prefers people nicely fitting the narrative: if we are talking about the disabled, we should show fancy prosthetic hands without asking if that’s the thing people born without hands need most. The perspective of a white, middle-aged engineer who has lost his hand in an accident is totally different than someone for whom a stump is a part of their body and doesn’t feel like they lack anything.

Truly free space for human-centric innovation is one that pushes us out of these aesthetic frameworks and narratives in which we’ve been immersed all our lives. Often the very designers we turn to for architecting new concepts are unable to step out of what they know.

Pawel has had a lot of trouble finding illustrators willing to work on the graphic novel, even when paying full commercial rates. His experience is that most artists willing to work on someone else’s ideas are limiting themselves to what they already know, often copying and remixing a graphic trope already found in someone else’s work - than interpreting the reality or imagining something themselves. It seems that even the visual languages we create bind us to some narrow paths of what is imaginable - and what is not.

“A lot of artists have a huge problem portraying a female protagonist without sexualizing her - or diminishing her into a cute cartoon instead of a person. Often two artists given the very same description come up with a wildly different interpretation of what a strong and independent woman is:” 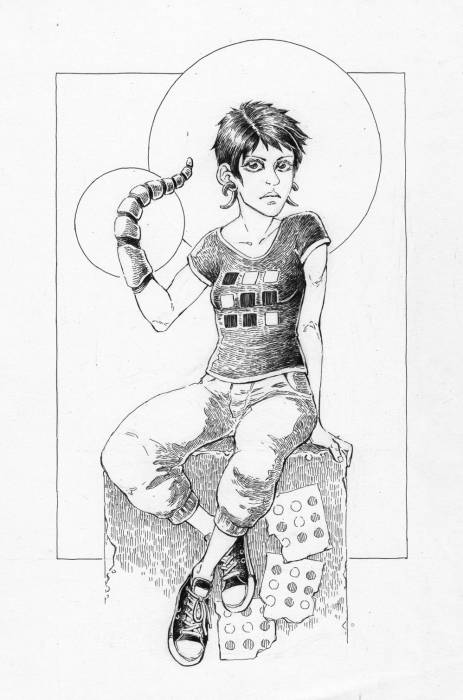 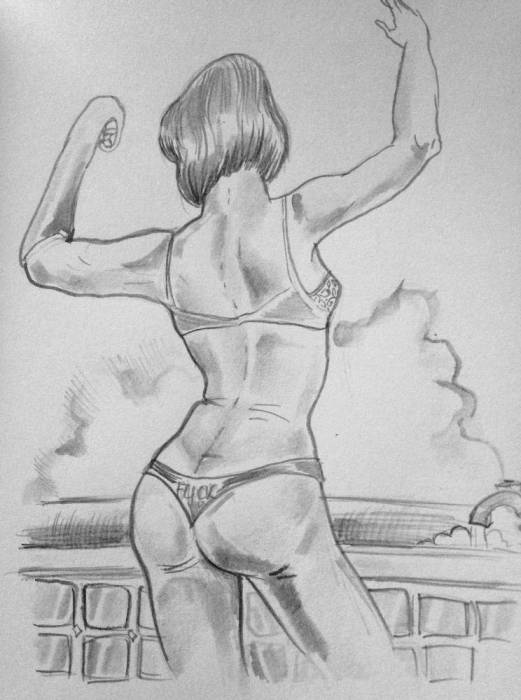 Other artists Pawel has worked with are generally not interested in a story that doesn’t include their favorite tropes - be it a lot of cutesy animals or a teenage gay romance somewhere.

“Even if these can be handled, a lot of illustrators are clueless about how to present a technology which isn’t packaged in a “sexy” and known aesthetic like cyberpunk. Photos and videos of real hackers are “boring” and not inspiring to the point where putting a character into a Japanese school uniform seems a good idea. Some ideas - like a prosthetic tentacle - https://l7world.com/2010/12/prosthetic-tentacle.html much cheaper to manufacture than a full hand - cannot be presented at all, as they make people think about hentai.
Pawel upholds that the narrative and aesthetic limitations are not just detrimental to social justice, but hold us back from innovating our daily lives and commercial solutions.”

One of the best examples is a photo camera - a technology we’ve had for almost two hundred years, and which in its current iteration cannot be used by people missing their right hands. For no other reason than a design choice, all professional DSLRs place their buttons on the right. Despite a petition from tens of thousand disabled people the big corporations declined to make a left-handed version, leaving people with only an April Fools concept of one.

Check out Pawel’s talk at 35C3 on the topic if you would like to learn more:

35C3: We need to tell a better story than cyberpunk

At 35th Chaos Communication Congress I had an opportunity to give a lightning talk titled "We need to tell a better story than cyberpunk". You can find a recording of it below, and the slides are available here. EDIT: OpenTranscripts volunteered...