Meet the Lab Rats! A thread for Sci-Fi Economics Lab folks to introduce themselves

@finnern has suggested to open a thread for people who are part of the Sci-Fi Economics Lab, and wish to introduce themselves to one another. I find this is a great idea: in fact there is already one for prospective co-authors. By all means, let everybody know who you are, where you are coming to the Lab from, and what you want to do with it in the future!

Me: I am Alberto, now the research director at Edgeryders. I am a formally trained economist, but am disillusioned with economics. That is, I believe in its potential, but not in the way it is done by contemporary academia. What I want to do with the Lab is to turn it into an interdisciplinary space to work on the right economic problems (as opposed to the BS ones that have no relevance), and the necessary intellectual boldness.

I’m Thom, frequent lurker/rare poster. I’m a director of the Irish Coop An Áit Eile. I’ve been playing around with different commons-based approaches for the last 10 years or so at a project level.

Mostly posting because I enjoyed Mazzucato so much due to Alberto’s recommend - hadn’t enjoyed reading any economics since Ha-Joon Chang.

Half here for hivemind scifi/econ recommends, half to see where the edgerydery economic imaginary be at?

The conference is starting, so I am hopeful.

I teach economics at Houston Community College, and have been writing on the interaction of early and classic science fiction and macroeconomics (micro, inventions, etc, have been covered ad nauseum).

My feeling about the economics profession and economists is that there is a lot of discussion about how to change how it is taught and what is taught, and a lot of desire to come up with better systems. No one wants a repeat of the disaster of 2008, but the complexity of actual economic systems and the wide variety of proposals means we don’t have anything new that has caught a preponderance of opinions.

The Left is hoping to foment the class war they have always wanted, and this worries me (aside from the potential for violence), because I have seen little evidence that most governments have not allocated resources more efficiently or justly than the private sector.

It seems to me that the education of children is the MOST important means to change the future – NOT the short term political process, so I think developing and implementing a curriculum of social solidarity which is not based on nationalism is critical, and even one which is built around the consideration of humans as part of the ecology and applying that to all aspects of what schools do – how does our language treat nature, how does our science treat nature, how do our societies treat nature, etc. And this will enable us to develop an economic system, based on what we can realistically do as human psychological actors. A lot of proposals are built around humans that are better than we are – socialist systems so far have utterly failed because they were forced down the throats of people who want to see direct benefit from their labor, rather than altruistic benefits to people they don’t know. We need to deal with human feelings by expanding the compass of who is “us” – not artificially by force but organically by education.

So the psychology and sociology necessarily precede the change in economics, in my view.

Hi all, thank you for today. The E.R. workshop for seeking the link to our own emotions/angst/gratitude, and the event tonight for being both offering lots to chew on and being entertaining. Bailed on the party as my head was full of interaction and material to take in.

Normally I’m involved in open (government) data and using open content. As a founder of an open data consultancy, an open data consultant for the World Bank, chair of the Dutch NGO Open State Foundation and board member of Open Netherlands, the Dutch Creative Commons chapter.
More broadly I’m a tech activist focusing on in which settings and in which form technology really provides agency to groups (as groups is where complex issues express themselves, not at the individual level nor at the statistical level of masses)
Group control over their own tools, most importantly including the off-switch, and tools useful on their own, more useful when deliberately networked with other instances. Networked agency and distributed digital transformation are the words I use for it.

My background is in tech and philosophy of tech, (personal / peer network) knowledge management and communities of practice / community building.

Aaaand this is a visualization of potential collaborations across people that were here today: 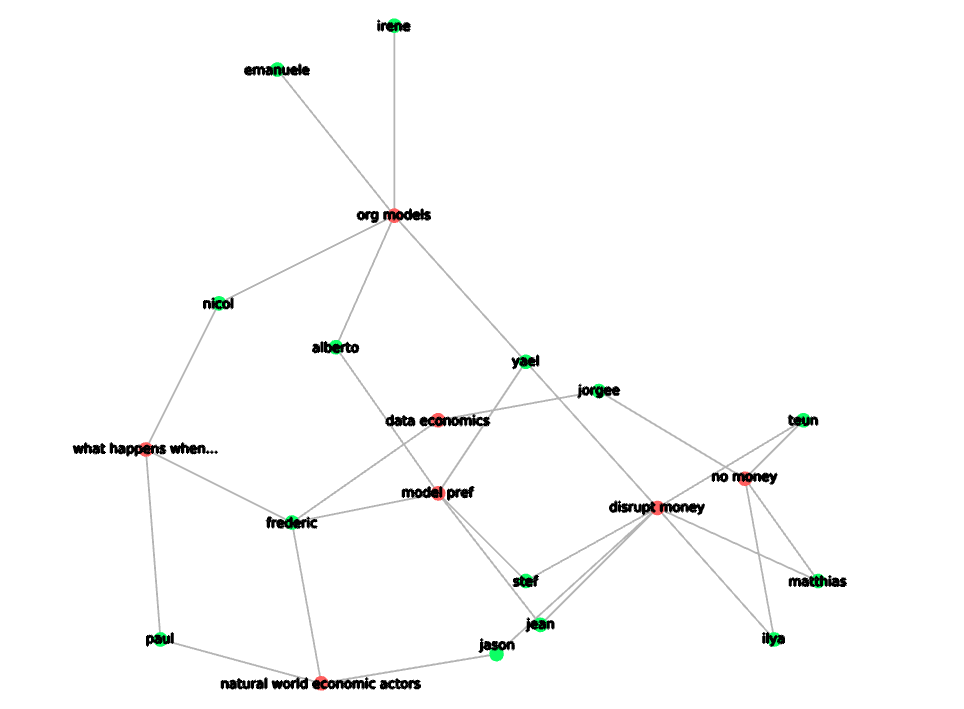