New idea: a network approach to data saturation in ethnography?

This sounds a bit crazy, but hear me out. Feedback welcome. It is part of the preparations for Masters of Networks 5.

In ethnography, data saturation is the point in data collection when additional data no longer contribute to developing the aspects of a conceptual category.

In the OpenCare project, we discovered that, as new posts got coded, they added proportionally fewer and fewer new codes to the study (blue line in the chart below). That does look like data saturation.

But what happens to data saturation when the data we are trying to discover is in network form? I refer to the codes co-occurrence network, which contains all the relevant concepts expressed as its nodes (the ethnographic codes) and their pattern of associations between them as its edges.

Let’s imagine an ethnographer who investigates a collectivity C with some research question. The answer to this question is known to C (as a collective) in the form of a network of associated concepts A, with N nodes and E weighted, undirected edges. Each edge e_A has its own weight w(e_A) (a natural number). Of course, this network is unknown to the ethnographer.

Data come to the ethnographer not in one single dump, but over time, according to a stochastic process. We can think of her accumulating data points; for example interviewing different people, who will contribute observations sequentially. Ethnography has the concept of “waves” of observation within a single study.

The ethnographer builds a model of A – let’s call it D, for “discovered” – as follows. At each step in time, she gathers a random association between two concepts in A. We can formalize this as two nodes in A, plus an edge of weight 1 connecting them. At each point in time, the probability that the ethnographer will pick edge e_A is proportional to w(e_A).

The ethnographer then proceeds to build the network D. First, she adds to it the two nodes connected by e_A, if they had not been added before. Second, she adds 1 to the weight w(e_C) of the edge e_C.

We want to show that data saturation, in this context, corresponds to the following scenario:

Generating a “world” to be discovered

I made a back-of-the-envelope simulation. To begin with, I built my A. The process was this:

Simulating the discovery process in ethnography

Having generated “the world” A that we are interested in discovering, I am now ready to simulate the ethnographic observation process. Such process is divided in waves. At each wave, the ethnographer receives new information. A quantum of information is imagined to be a single dyadic association, in the form “Alice, an informant, produces a statement that associates the ethnographic codes x and y”. In other words, the ethnographer discovers edges in the codes co-occurrence network. Of course, she does not discover the weight of the edge, only that it exists. Reformulating, a quantum of information consists of two concepts, relevant to the research question at hand and representable as ethnographic codes, plus the fact that at least one informant associates them to each other. In practice, we can picture the ethnographer as drawing a random edge from an urn of edges, some of which are more represented than others.

As she discovers edges, she proceeds to add them to the discovered network D as follows:

To give my simulation granularity, I decided to make small waves of only 500 dyads each. This is small indeed, because a single, meaty contribution might be coded with 20 or more codes, thus instantiating a 20-clique with 20 x 19 = 380 edges.

Within the model, it takes about 10 waves to discover 100% of the codes. The discovery of edges is much slower: even after 100 waves, 5-10% of the edges remain undiscovered. 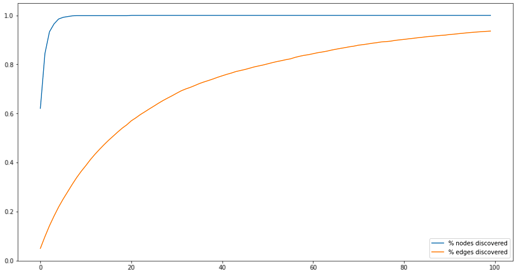 This is driven by the math. There are fewer codes than there are connecting edges (with my data, about 1,000 codes and about 10,000 edges, which is quite realistic for our SSNA studies). Every observation reveals just one edge, but two codes. This leads to a very quick ramp up of the number of codes discovered.

From the point of view of the ethnographer, who does not know the real A and so cannot compute these percentages, data saturation presents as a decline in the appearance of new nodes and edges: 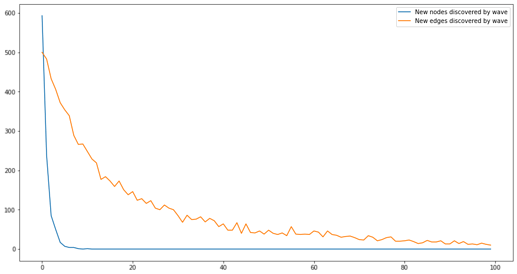 We can argue that A also contains noise and irrelevance. Some informants will no doubt add to the data idiosyncratic connections that no one else is seeing. In empirical SSNA, we make a point of discarding all co-occurrences with weight equal to 1. What happens if we aim to discover not all of A, but only its 20% highest-weight edges? In the graph below, the green line captures the percentage of these high-weight edges discovered with each wave. After 40 waves, almost all have been discovered. 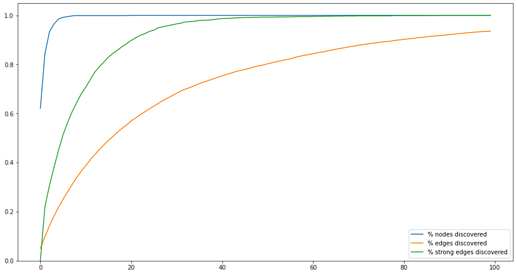 Again, this a mathematical artifact. There are fewer high-weight edges than there are edges in general, and they have higher probability to be drawn from the distribution of edges in A at each wave.

What the ethnographer sees is this: 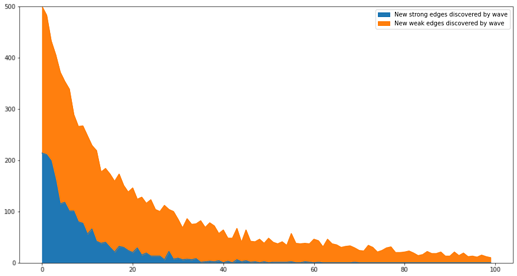 New edges appear at a slowly decreasing rate (represented by the height of the whole curve) but strong new edges (in blue) decrease much faster. Naturally, the ethnographer does not know which new edges are strong – when they first appear, they all have weight 1!

With edges, the point is not only to count them, but also to weigh them. To compare the edges of the real concept map network A with those of the discovered once D , I treat each as a vector of weights, and compute the Euclidean distance between D and A after each wave. I find it decreases at a decreasing rate. The same measure, computed for strong edges only, is lower, but does not decrease significantly faster. 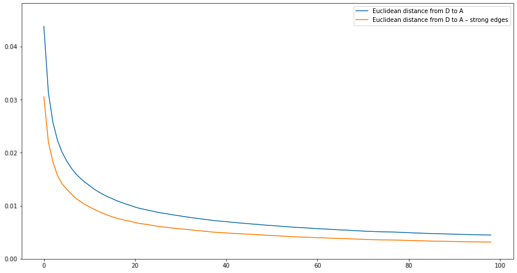 Again, we observe a kind of data saturation: the reduction in distance between the discovered edges in D and the real ones in A is smaller with each successive wave. The main problem here that we have no intuitive sense of whether 0.001 distance is “pretty close” of “far off the mark”.

Just by how random sampling works, we know that the distribution of edges D is going to converge to the true one A. But we do not know how fast, unless we are prepared to assume a specific form of the frequency distribution of A. Recall that, in my simulation, I generated A via a Pareto distribution random number generator, but this is a bit of a shot in the dark. Not completely, though: we do know that:

Point is, fat-tailed distributions mean that the “important” high co-occurrence edges will be found more quickly. And in general, if we could make assumptions about about the distribution of A, then we could quantify how close we are to saturation by comparing different waves.

I could keep playing with the simulation, but best to stop here and pause for some feedback.