New report on the Commons: A New Alignment of Movements?

AnneMarie from @CommonFutures shared this report by David Bollier & Pat Conaty a couple weeks ago, and it makes for a useful overview, so thanks! I’m summarizing some key points below:

Can the commons paradigm constitute a shared agenda for change, at local, national, European level? Can it expand existing movements into majorities and build cross-movement collaboration and action?

Movements which hold the promise of political mobilization and reformation:

A. The Co-Operatives Movement: Employment in the co-operative movement – at 250 million people – is actually larger today than that of multinational companies, membership is higher than in trade unions and political parties (p.5)

The strategic challenge for the solidarity economy is to build horizontal alliances and to advance co-production and co-financing. (p.12)

C. The Degrowth Movement: new language to approach “the economy” and “the environment”; abolishing economic growth as a social objective

Challenges: invent new ways to enable it and self-reproduction over time, to break the logic of capitalism;  “netarchical capitalism” reaping the benefits and producing generalized crisis of precarity among contributors in open platforms, according to M. Bauwens from P2P Foundation (p.19) 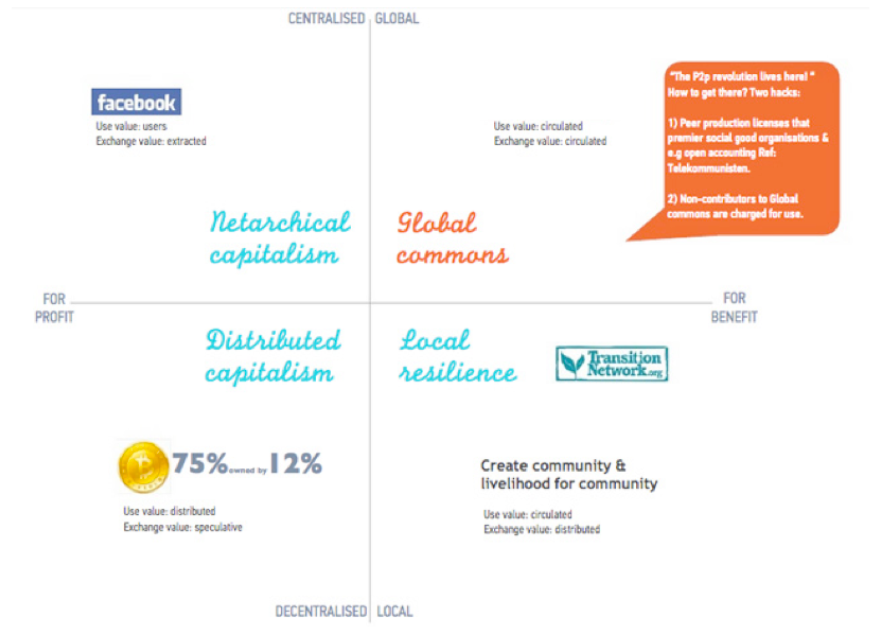 Venture capital funding schemes are seen as some of the controversial bits of the movement, but on the up side there are also experiments in open value networks such as Sensorica to find the right balance.

In between there is a mix of non-profit and for profit driven approaches, like  centralised production using local infrastructure: FabLabs and Makers spaces

F.The Commons Movement: self-organized groups of people can and do create systems of governance and management for their shared wealth, often outperforming bureaucratic systems and predatory markets (p.23);

“each movement seems to want to change the relationships between the state, market and civil society.” -Frédéric Sultan

Major obstacle seems to be the coordination costs between movements: “existing organizations don’t have time to be part of collective discussions. We need to fill this gap….”

Here’s link to another good report along these lines out last Fall, titled “Weaving the Community Resilience and New Economy Movements” with quite a few rich insights and excerpts culled from a series of conversations with thinkers, practitioners, and influencers: Weaving the Community Resilience and New Economy Movements in the US -...

One of the most exciting new economy efforts in the US is the New Economy Coalition (NEC), made up of more than one hundred organizations (including Transition US)...

It, too, names a set of around 10 key themes or principles to navigate by.

I’ve been working on a good deal of mapping and comparison based on these reports and related frameworks or recommendations from the landscape of change theorists and actionists…part of an upcoming project called Real Economy Lab.

More to come! Here’s one recent metamap for example: