Occupy AirBnB: Coming to a city near you? 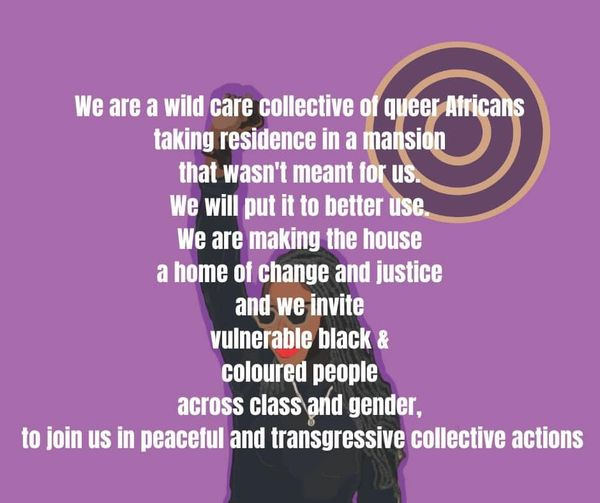 This action by WeSeeYou, a South African collective of which @Player1 is a part, might be forboding of a similar movement in Europe.

What they did is quite simple. In response to the marginalized being hit hardest by not being able to make rent, especially in the wake of the pandemic, they collected money from friends and family to book a Cape Town mansion on AirBnB, operated by the company Turnkey365.

Once their two days were up, they simply refused to leave, demanding instead to negotiate with the owner to let them stay indefinitely. Their motivation is for this to be “an opportunity to collectively set a precedent for cooperation between the private and civil sector to urgently redress our current social crises”.

I think this post from their Facebook page outlines their motivations well. Remember that South Africa is the most unequal country in the world measured by the Gini coefficient, so this is perhaps particularly on point there.

The economy was designed to protect the wealthy, it is a pyramid scheme and it is busy dying and we are being manipulated to believe it is our duty to protect it. The economy is actually the protection of the wealth of the rich. There are 32 00 high net worth individuals in South Africa, they have at least 1 million dollars each. 50 percent of adults will be unemployed by the end of the effects of Covid-19. The high net worth individuals control 40 percent of the country’s wealth. That is enough to control the country if you see it as a business. No one should have to struggle to find work or spend their entire lives working, only to struggle to make ends meet. In the midst of all this state sanctioned repression, women, children and queer people are targets of sexual, physical and verbal assault. We do not consent to this. We deserve safe, well serviced spaces. Our occupation action is an example of how we could make and claim these spaces. How we could live rather than just fight to survive. The time has come for us to embrace the need for change and join actions that will make the world the place we always hoped it would be

I found this on re-posted by a member of the group but originally by one Kim Lilian Windvogel.

The Camps Bay occupation is making people sweat because it touches on capitalism as much as it touches on mismanagement from government. If they occupied a piece of government owned land, people might be united in it because people generally hate leadership. But they’re meddling somewhere else and no one knows what to do with their feelings because assimilating to Capitalism is supposed to buy you the security of ownership and decreased risk, but look now, there’s a glitch in the system. 7 occupiers glitched it in a mansion in Camps Bay. 2020 is lit.

Obviously, they are facing a lot of backlash from all kinds of places. This is all currently unfolding. It seems to be making the media: The artivists are a group of queer radical activists who are fighting what they said are “global elites in a corrupt and broken system of inequality”.

As expected, Turnkey365 has responded by now suspending pay for the staff that oversees cleaning and operating the mansion, pushing the responsibility for their precarity onto the activists.

This is a very gutsy move in many ways, as a direct action against the infestation of short-term rentals at the expense of city dwellers. They certainly have my support for trying to challenge the status quo. I wouldn’t be surprised if we see more of this in the future.

They must be steeling themselves for a showdown…

This is definitely a thought provoking story. Observing reactions to a move like this might be quite interesting here in the Czech Rep. On one hand, AirBnB is perceived to be, especially in Prague and other touristic destinations, as a housing problem no#1 (putting aside the discussion about the veracity of this statement), on the other hand, liberty of private ownership is considered one of the hallmarks of the post-communist transformation. What do you think of such a strategy and statement, and what would be the impact @kuba_svehla @zalesjan @MartinDvorak @Glow @divoka.klarka @Creepz @josefi @petrkubala @VojtaW @apol @lucie @daliborlev @jardamichl @matysovabarbora @sarahaj @Johanka @MartinMatl @pokec66 @vojtechjelinek @LukasFidrmuc ?

happy to chat about it and ways to connect.

Thanks for the love Hugi

Well clearly the system in place needs transformation, probably more in South Africa but it is needed in any country in EU as well.

That said, I would have done something else to start that fight or to attract attention as that seems to be your goal.
Every major city has plenty of abandoned or empty buildings. Many of them will never even be claimed by someone as part of inheritance or similar. Why not pick one of those and transform it into your space? Make it something rather special, and that would look much better than entering someone’s house which is actually used every day.

jasen, its pretty arrogant of you to be that ignorant and expect me to endure your opinion without annoyance.

you know nothing of the choice of house, the occupation movements that have been happening throughout my country, the high levels of inequality, historically cemented exploitation of land and resources by the global north, and apparently white privilege either.

If you want to tell me how to do my work, then i am obliged, as part of the work - to tell you to go suck it.

Also if you would have done something else, please do and I’ll offer my critique. I promise to be better informed than you are.

I actually know more than you think about the inequalities in your country, the effect the northern hemisphere on Africa. Certainly not as much as you but I do read books and am very interested in colonisation, apartheid and history in general. Instead of throwing political correctness and some emotionally immature responses about my “white privilege” and “ignorance”, you could have suggested books, documentaries or similar.
As far as my privilege goes, after the civil war I became a refugee, had years of abuse and horrific conditions for which I had to work hard to recover…both physically and mentally. I am now a foreigner in my own country as well as in my country of residence…and I had to work 10 times more than any local to prove I earned my spot. I also paid for my own education, by working and going from cleaning toilets, doing worst jobs in construction possible to starting my own business and transforming other people’s businesses or ideas into successes.
I worked for years 18 hours per day, with 1 or 0 days break per week. So yeah, tell me more about my privileged life please.
I was giving you a point of view an average human being could have, based on the information you supplied here, and that is why I proposed an alternative. That alternative would give much less ammo to your enemies, but sure is harder than what you are doing. I proposed it because I wanted to help you, not judge you.
If you are using the same methods to expose problems in your country as you are to explain my errors to me, you will have much less chance of success…so hopefully you can learn from this exchange as well

I also was the only white person to participate in a strike against racism in a very big company (of 65000 people) some 10 years ago and I was heavily punished for that.
So yes, I am aware racism is in every level of our society in Belgium. I can make an educated guess and say racism is very present in SA as well, as in so many other countries. Somewhere it is institutionalized, somewhere it’s not.
At the same time, there is racism in every race. For me the notion of race makes no sense, neither does racism…but what can I tell you. I still feel the walls built by the society.

while i feel for your pain.
the only lessons that comes from your ignorance,
is to allow the ignorant their bliss.

I can’t “win” anything here, maybe just learn…or waste my energy as that’s what it looks like with the wall like you.
People invest in people, people follow people…it’s all about the people. You might have good intentions, as your movement seems based on good values, hope you have capable people in the organisation.
That’s all from me.
Good luck

Hope the affirmation of your ideas helped you learn what you already know.
Well done on the ideological and anthropological supremacy.
I’ve been put in my place,
Promise never to behave like this again

keep it up, very productive, reasonable and emotionally mature responses

You don’t care to explain but you care to write that? I am impressed

its so fun to taunt you
and impress you
and be both productive and immature
the testosterone. Yes!
Love it.

A worthwhile chat after all.

Love your assumptions, too bad you can’t really. Since I was 18 I don’t care about what my parents think about me…let alone you

. That’s all the energy you will get, tried to help you…