Hi all, I am browsing OE posts to figure out the state of things on OE. We have scheduled tasks aiming at possible improvements to OE in the context of OpenCare. I understand there has been lots of work done. I am just curious to hear OE users, to get a sense of possible improvements and/or changes.

I am sure I can also learn a lot from Matthias and Alberto.

I tried to see whether I could try OE for myself, but I couldn’t find proper documentation (if it’s at all possible).

I hope this post gets noticed, OpenCare is a good opportunity to get OE to its V2.0

Hope to hear back from you soon. Hopefully, we can take advantage of the Feb LOTE5 feast to talk things over.

@melancon, the OpenEthnographer manual is here. I just tested it and it works.

One thing the manual does not say is that OW only works for users with content manager privileges. I have now given those privileges to you. You should therefore be follow the  manual: upon highlighting text you should see the “annotate” icon etc.

I’ve already tested it, works fine (I see the pop-up when selecting text in a post). I’ll dig the doc to learn more.

@Alberto @Noemiand maybe others? (it’s hard for me to say)

The OE workflow, as described by Matthias in the user manual, can be somehow sketched as:​ 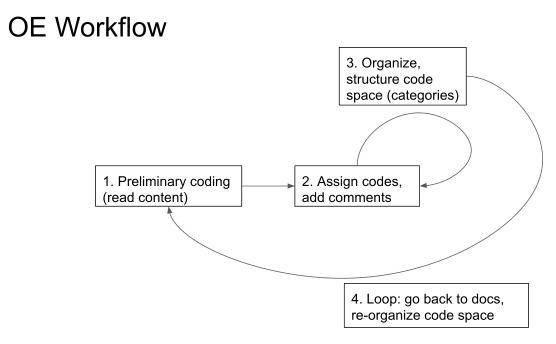 This is ok, as far as we only look at the coding activity. Codes however are inserted in order to leverage analysis of exchanges between community members. Including code/posts analysis would then give: 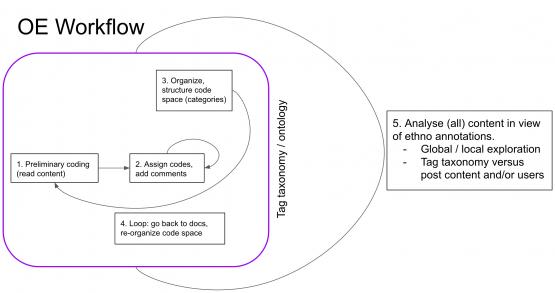 I feel it is important to investigate how OE could be improved to better serve users, during the coding activity as well as during the analysis phase.

Looking forward to your reactions/comments/critics.