On growth and building a shared vision by an “unruly” community

Last November the Edgeryders community reached two years old and 1700 registered platform users. Over 350 have registered this year alone, starting March after our new platform launched (see pic below). Out of these roughly 70 percent are active, in the sense that they’ve returned at least once after creating an account. 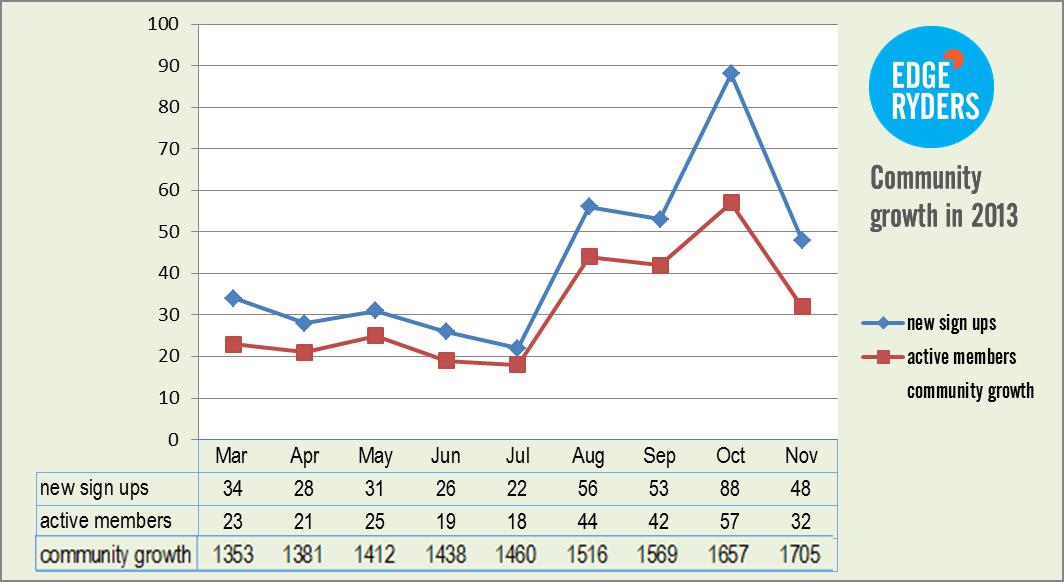 From the community organizing perspective, in 2011-2012 things went smooth as we worked on a pre-defined by the Council of Europe agenda: we were all tasked with sharing our experiences of transition, with themes being launched sequentially throughout the year.

In 2013, with the spinoff into an independent not-for-profit social enterprise, we unleashed chaos, and unlike standard community paths, we went from an organized to a much more diverse and dispersed group – I would go so far as to call it an unruly community. Members can use Edgeryders web home to put up posts whenever and wherever, to set up and manage their project group, reach out to others for help and use the infrastructure the way they see fit. Specific tasks and conversations around them often need to make sense only to those collaborating. It was with that healthy dose of chaos & empowerment that our true potential to work together in a distributed way came about. A year of building the unMonastery and five months of organizing Living on the Edge 3 (not to mention weekly community calls!) prove that.

However, as membership and number of projects keep growing, one of the challenges I perceive is keeping the flag up for everyone to see, especially new members looking for spots to get involved, older members who got lost on the way and are waiting for a chance to jump back in, anyone whose work could benefit greatly from collaborating. So we might need to do a better job reminding ourselves where we’re going and how each of us can make Edgeryders their own.

Building the vision and the capacity: a community survey

Some tools work better than others to keep communities healthy, yet you don’t know which ones until you test. A week ago we launched our first community wide survey to ask every member and supporter how they want Edgeryders to move forward. It is a by-the-book, cheap tool to collect opinions in an organized way and on a larger scale. It doesn’t seem to be a lot of people’s favorite. Who enjoys filling forms anyway? From the community theory’s perspective, asking people to do things which are not individualized and don’t come with individual rewards will hardly end up in engagement.

So what is the individual reward? Why should you fill it in? The way it goes is: you share your thoughts on what you want Edgeryders to achieve (think big!) -> you hack with others the responses -> you are Edgeryders moving forward and part of a world changing organization where everyone gets to do work they love, the way they see fit and with the people they want to do it with. And guess what, chances are we could make a living out of it. truly unruly.

Plus, surveying makes it possible to get our real community feel, as opposed to a false consensus bias. The people in Edgeyders are the most free and complex people I’ve met, so any attempt at speaking about “community values” or “ER community is heading the x way” are faulted from the beginning and can lead to people disassociating their identities from it. Unless it’s something we put our skin into and build together.

Filling in the survey takes 5 minutes, please consider making the effort and let’s see where this takes us. Collaboration starts here :-)