Hi
I’m Sam
I’m building participatory governance software called Forby.org.
I’t definitely in early stage but it’s workable.
It will be available for beta testing by the end of this week, around September 5th 2022.
I know that participatory governance is a topic of interest in this community, and I’m curious to see where people have gotten.
Also looking for beta testers.
Thanks ahead,
Sam

Hello Sam, the main participatory governance geek here is @hugi. He and his team have been building various pieces of software to that goal over the years.

I looked at your website, but I could not figure out what is the concept behind the implementation. Except for voting! There, your reference to the mighty @pietro (I consider him a friend – or rather a potential friend, we live so far away from each other that have not seen one another in years!) says it all.

But OK, other than that, what is “good governance”? One where everyone is heard, like in Sociocracy? One that looks for common ground, like in pol.is? One where there are a lot of opportunity to make decisions through voting, like in Liquid Feedback? What kind of world is Forby meant to help us achieve?

Hi @SamS! Fun to see other people in the participatory governance space. My first question is really super simple: Are you building this with a particular community in mind? Do you have an actual flesh and blood organization of bonafide humans who this systems has been tailored to fit, and who are enthusiastic early adopters? If yes, who are they? Understanding for who this has been built will make it easier to make sense of the tool itself.

For example, these tools that I have been involved with using or creating all have communities of origin:

What would you say is the community of origin of Forby?

Hi Alberto and Hugi
It’s an honor to be in the company of such esteemed builders with interests that I care about.
I’ll try to answer both of your questions here.

To give an overview, I’m attempting to create a modular governance framework that will allow experiments with a wide variety of empirically/ scientifically / mathematically plausible governance models. Whey you guys get in to play with it I hope you will see the possibilities of the framework.

@alberto good governance is definitely the goal here, and voting is an inevitable part of that, but not the primary part.

I think of good governance as a process of collecting, developing, and prioritizing the ideas of the members that

The process of collecting and developing options (proposals or nominations) is really where the rubber meets the road, and I’m experimenting with an interface that matches the natural idea development process that people use “in the wild” which is also similar to the liquid democratic process neurons and neural clusters use to make decisions.
Also, natural decision making features like management of Ideas and alternate ideas, prioritization separate from approval, etc.
I created a video on proposition crafting where I discuss some of the considerations I have been working with.

Forby plans to have features available to users that are similar to ones you mentioned:

@hugi some of those are new to me, I’ll definitely check them out! There were 6 groups that I was juggling in my mind as I designed Forby:

So the real answer is that there is no specific group that this is built for, but instead it’s built for an amalgamation of every group decision making process I have been a member of.
I’ve created a similar video about using liquid democracy in settings from personal to global that goes into it a bit.

The goal is to make this platform very accessible and useful to practically everyone. If that can be accomplished it will greatly increase the public awareness of things like the importance of voting systems and eventually make it more likely that truly democratic processes could infiltrate our local, national and international governance.

So sorry for such a long answer. I’d love to include you two in this project somehow. It will be ready for beta testing by the end of the week and it would be a privilege to watch you both navigate the system and hear your commentary as you do, including concerns, likes, dislikes, and wishes.

Hi Sam, sorry to hear about your mum.
Re testing: are you looking for a coherent group, or just individuals like myself to test the software.

Hi Nadia
She died the way she wanted to, so no complaints there, but thanks.
Going into beta I’m looking for anyone at all, but preferably people with care about and experience with new forms of collaborative decision making and governance who would be willing to poke around while I watch and give me honest feedback.
After that I will be looking for groups of various kinds.

Forby is ready to look at if you are interested but I’m really not happy with the ui.
I really need some input on how to change it.

Ok I had a quick look and yes the UI can definitely use a bit of polish. Are you working with/ have a budget for a professional UX person?

Where are you collecting feedback? Is there a hackpad somewhere?

an interface that matches the natural idea development process that people use “in the wild” which is also similar to the liquid democratic process neurons and neural clusters use to make decisions.

Yes, I have a small budget for a UI person. If you have a recommendation, I’ll take it!

Officially I’m hoping to get recommendations in Forby itself in this Community:
https://app.forby.org/community/63369d6e16796e85ad79a823

For non-members, this google document is available.

If you recommend another way to collect ideas, I’m all ears!

I’m looking for the reference, but there was a scientific book written about this topic. I watched a video interview with the author. The concept is that as visual information is passed along the chain from receptors to various processing cells that are “looking” for contrasting areas or lines to cell clusters that look for patterns of contrast and lines to find clues for known objects like people, predators, food, or other objects like cups, trees, etc. There are clusters of neurons that seem to be responsible for deciding what the object is and they seem to hypothesize various objects and try to fit the visual data into the pattern of the object. The stronger the correspondence between the visual data and a hypothesis, the more neurons in the cluster “agree” with the hypothesis.
I’m not explaining it perfectly, and I’ve spent a lot of time looking for that interview because it was so good. If I find it I’ll reach out.

I just made a video to explain Forby: 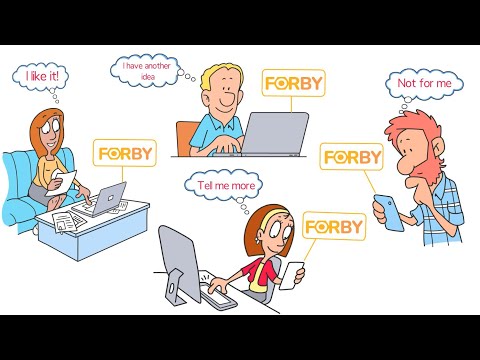 Looking for larger communities to beta test… I think student councils are a good place to start: Large, democratic, and agile enough to try new software.

Draft video on elections in Forby: 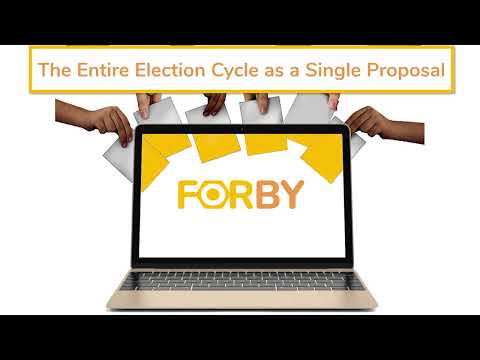