Ready - On Digitalisation, Industrialisation and loss of jobs during transitions between systems - Form Text Source 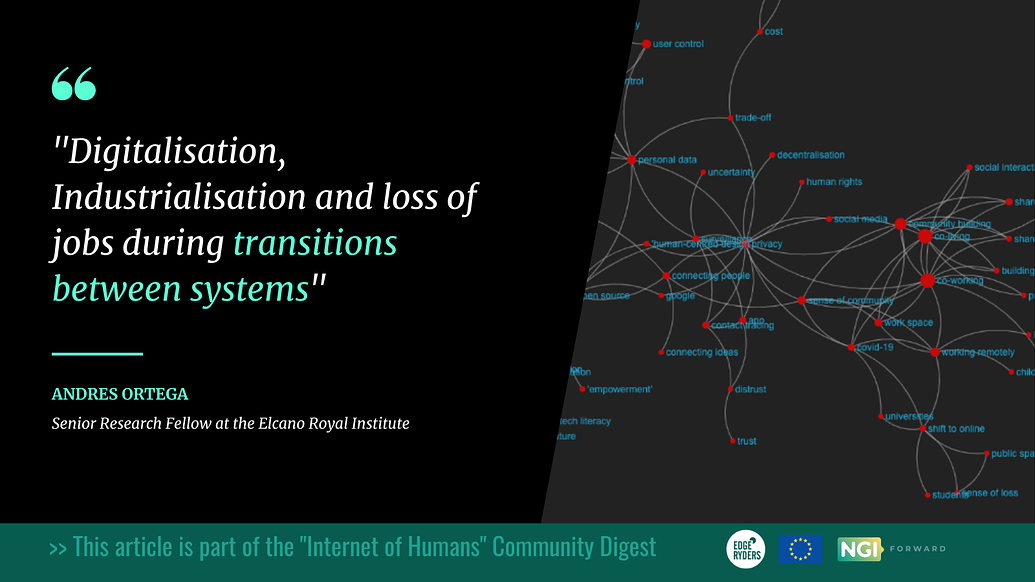 Andres Ortega is a political scientist and a former journalist at El Pais, posted in London, Madrid, and Brussels. He has also worked for two prime ministers, in the 90s, in 2008 and 2011, as head policy planner.

Then, he sparked interest in the concept of the internet — the birth and contact of it, which brought him to develop in a book 2007 the concept of “the power of the few”. He wrote a book on robots at one point, the first one to be published in Spain. Come 2016, his interest in technology intensified, reaching the conclusion that technology is the true power-holder and game-changer in our time.

Andres thinks technology allows us to do things that wouldn’t otherwise be possible. It comes with negative and positive aspects, though Andres believes the percentage of positive is more. After all, the pandemic would have been unbearable without this kind of worldwide connectivity. He thinks that technology is going to destroy jobs, while also creating new ones, for which the job-losers won’t have the necessary skills. There is a problem of transition that has already started.

In general, Spain’s connectivity is something to be proud of, but digitalisation could take some criticism, especially with how things are for medium and small companies. They take up 80 percent of the Spanish economy. Yet, their digitalisation is at a low level, even though Andres believes that’s the future, with the plans upheld by the European Commission.

Andres points out that Spanish companies tend to buy patents on software, but not enough money is spent on R&D (Research and Development). The government is recently starting to push for that. The pandemic has made it clear how important it is for Spain to create good jobs, which can only be done by developing software and technology.

By nature, a monopoly isn’t good. This isn’t a problem for Spain, but Europe at large. Some US tech companies have become too extensive, and as seen with other industries, where control of the big few has become obvious, policies are being made to change that to promote competition.

Internet connection and digitalisation need to become common goods. Not necessarily free or public sector provided, but accessible enough for everyone, even when private sectors offer it. Andres thinks access to internet connectivity belongs among the policies where the responsibility lies in the hands of the corporation to provide it. There are different objectives, some sustainable, some not. The UN is working on some of it.

The internet can be both a symbol of freedom and of control. Even in authoritarian countries where the internet is controlled by the government, sparks of protest in those very social media platforms can be seen.

Ortega confesses his values are in line with European values. The concept that democracy, freedom and rule of law complement each other but are not the same thing. One can’t ignore privacy. Ortega thinks European values can and should be exported to other parts of the world where the internet and connectivity aren’t fully developed. China is certainly ahead in this race.

Ortega points out that how all these countries export their values is different. In terms of data control or ownership, China is for the government, the US is for companies, and the EU puts more weight on the individual.

You will get:
A copy of this months’ digest (magazine) and opportunities to make meaningful new connections across shared interests: