Report back from Rome- Unlocking the Potential of the Social Economy for EU Growth: The Rome Strategy

Additional reflections by @bezdomny about the opening talks:

It wasn’t until the second speaker came on stage that the word “unlocking” became quite clear. Luigi Bobba’s economic insight evoked ire from some audience members as many present realised that unlocking was a euphemism for exploiting.

In fact, we were warned by the first speaker, Jean-Paul Fitoussi, whose opening demonstrated his position on the topic of social economy with statements about how unemployment insurance policy was made during full employment, and when high unemployment actually occurs the insurance gets taken away, therefore Europeans feel as though they were taken for a ride. He goes on to ask why Europeans should accompany the EU on another risky venture without proper assurances of security if those economic risks don’t pay off in the end? And how can you even trust these assurances anymore? Fitoussi finishes his illuminating speech by claiming “Citizens change governments, but not policy.” Insinuating that unless people are involved in the policy making, nothing will change, just the faces on TV. This set an optimistic tone for the conference! We were all citizens and we were there to influence policy along with the Italian Republic which had just taken the helm of the rotating EU presidency. 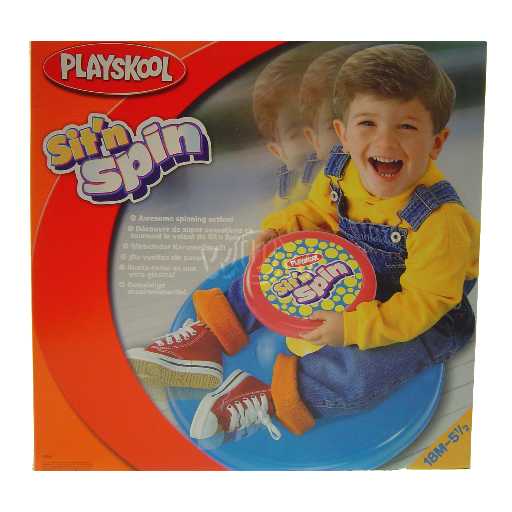 The purpose of this conference was to create a document to present to the European Commission after the work group sessions to serve as a guide in legislating the Social Economy in the EU. It seemed an innovative way to approach policy making by Italy, to quote Fitoussi again: “We have to learn to work not by the rules if we want to reach the future.” 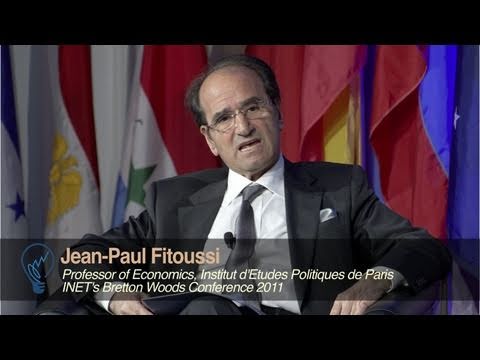 However all the hopes we had for innovative policy making and rule breaking were dashed when we realised that the definition of "social economy” has been restricted over time to mean, basically, cooperative fruit growers. If you are a cooperative fruit grower, you are a member of the social economy. Okay, that’s a slight exaggeration, but the result of the conference, the Rome Strategy, seems like a piece of neoliberal doctrine copy+pasted from the TTIP.

This is perhaps what Fitoussi was warning of in his not-so-subtle opening speech, in fact many present were shocked that he was so outspoken on rights of workers in the social economy. It’s too bad he isn’t a policy maker! 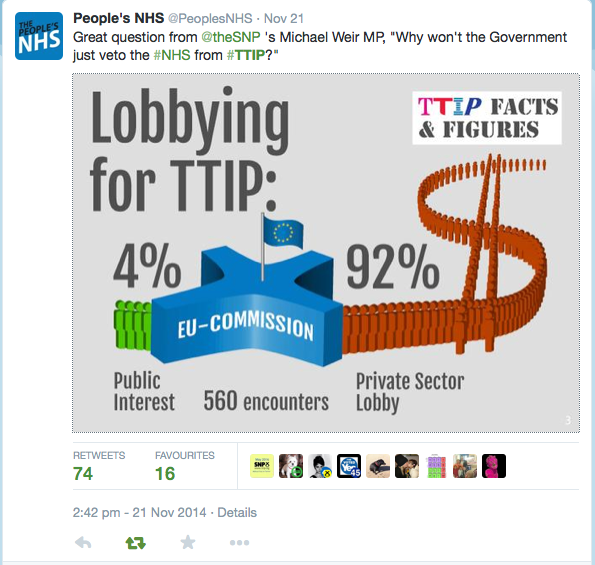 After three of the other headline speakers didn’t show up (Nicola Zingaretti, Apostolos Ioakomidis, and Antonio Tajani) because they had “something more important to do”, we broke up into our work groups to hammer out some potential policy influencing issues in “non-formal” horizontal discussion groups, which were anything but.

After the opening talks we broke into working groups. I was slated to present in the New Trends and Forms of Social Economy session in the main auditorium where the large speaking events at the conference also were held. There were seats for over 500 people, but there were probably only 50 people scattered around the huge hall making real dialogue a bit awkward. At the beginning the microphone was not working and therefore translations were not working either. We spent about 10 minutes figuring out what to do, with voices in the cavernous room shouting out their preference to the stage as to what language to use. Here you can see a short clip to get a sense of how things started off.

I did come with prepared official presentation, but waking up in the night entrapped in a completely subsumed space, a hotel at the crossroads of nowhere, Rome, I decided to change my approach a bit. The night before the conference, to get to my assigned hotel, I had to take the metro to the outskirts of Rome. At the station I stepped out in a huge open cement plaza with tall buildings in the distance. It started to rain. After wandering around, I found a few people standing alone at the crossings of massive intersections with cars streaming by in 3 lanes, both directions. I tried to ask for directions with my little piece of tattered, damp paper with the name and address of the hotel, and my bad Italian, no one could help me. Finally, after 20 minutes walking around, getting more wet, in the dark and cold, a lady at a café offered to call a taxi for me since no one in that café seemed to know of the hotel or the road it was on. The taxi driver got lost, yelled at me because I did not know where the hotel was, and then overcharged me. This was not a space for humans in relation to each other, or the city. 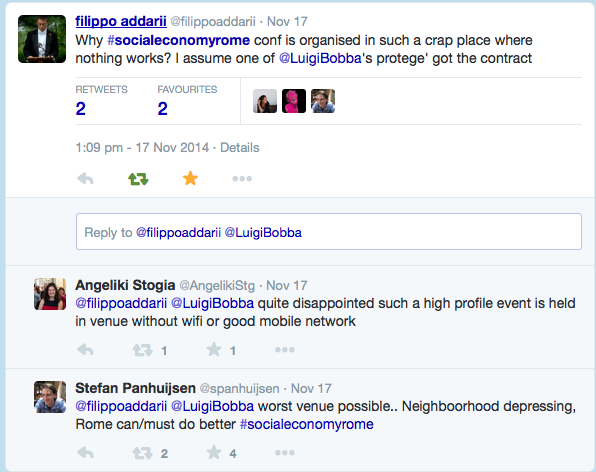 Later Jeff informed me that the area, EUR, was built by Mussolini, which helped me put my feelings of enclosure and insignificance in a political historical perspective. So, in the middle of the night, I decided to start my talk with a more personal, emotional response. Maybe this was a bit rash and because of hunger, since there was no restaurant in the hotel and I was told the nearest place to eat was a 20 minute walk down a busy street with no sidewalks. I wanted to give a spontaneous, random reflection on the spaces we are sometimes forced to inhabit, my reaction to the schedule (in which all, except one, of the official speaking slots were filled with men and how if we are to get anywhere that has to seem absurd to us all), and that the apparent lack of homeless, drug addicts, unemployed, poor, immigrants, sex workers, and disabled was something to at least notice if we are going to talk about a social economy with any relevance. I wanted to point out that what is missing is usually that which the system wants us to overlook. The system thrives when we are separated and wants us to just follow along with the prepared agenda and make some polite recommendations. That is its stronghold, that is what it makes easy to do.

Standing on a huge stage, in a huge room, at a podium looking out into blank distant faces after being told I was to give an informal presentation in a working group was disconcerting enough, then the electricity went out.  I gave my presentation in a blue glow of emergency lighting as I stood at the front edge of the stage doing my best to project my voice into the dark. After my extemporaneous opening remarks, I gave an overview of Edgeryders, Matera 2019 and unMonastery. I even managed to get a little joking banter going with some of the audience, since the absurdity of the situation brought out the best in some of us. In the last minute of my presentation the electricity went on so that was nice, I could see some faces, they looked not too bored and the clapping seemed not too insincere.

All of the others presentations in my working group focused on cooperatives. One of the most interesting was presented by Andrea Bernardoni of ARCS in Italy. He described a model of citizen’s democratic participation in the management of local public utilities through a sustainable and integrate management model of local electricity grid. The stock of the E-Werk Prad cooperative, which started in 1926, is owned, in the majority, by local citizens. They manage the energy production plant and the distribution network, the cooperative controls the supply chain, with an annual saving of about one million Euros which is regularly reinvested locally. The cooperative has achieved both energy autonomy and zero kilometers production.  Many of the other presentations were dedicated to  the financial, legal and policy issues related to growth of cooperative structures.

Our working group discussion was mainly about the public policy that is hindering the social economy, what can be done to boost growth, and new approaches to reconciling the difference between the need of an organization to develop deep roots in local communities and the need to scale up their activities. It was pointed out that there was not an agreed upon definition of the Social Economy so that was going to make our policy recommendations rather difficult.

There was a panel discussion about Change in Europe and How Social Economy can meet new social needs and a presentation of the recommendations that came out of our working groups-.  Unlocking the Potential of the Social Economy for EU Growth The Rome Strategy Based on the Proceedings of the Rome Conference, November 17 and 18, 2014

The best part of the conference for me was the two young women on the conference staff who helped me with my reimbursement paperwork. When told my taxi and ground transport would not be covered I pointed out that I had spent more on that than on my airline ticket. They seemed genuinely distraught. I assured them that it certainly was not that big of a deal, and not to worry. About 30 minutes later one came to find me sitting in a session and let me know she had spoken to the management and got me a special exception, somehow.  These two women, and two other young women who assured me that change would be slow when I went on a bit of a rant about the reinforcing of power structures, were the only people I really connected with throughout the conference.

In conclusion, the thing I feel the most uncomfortable writing about and including here is about wanting to point out the absurdity of there being only one women in a key speaking position at this conference.  I considered taking it out.  I actually did not get around to saying all that stuff about women and other underrepresented folks in the confusion and my lack of confidence while on stage.

Wow, this really sucks. I am so sorry.

There are excellent social economy practitioners in Italy, but none of them work for the Prime Minister’s office, in charge of putting together events during the Italian presidency of the EU. It seems the Forces of Mordor have taken over that one event.

For what my opinion is worth, you did very well to point out the absurdity of the situation. Better assume that these events are evil until proven otherwise?

Wow. Sorry it was such a mess

all is fine--  it already seems like a dark comedic dream.

It was extreme tourism for me.