This wiki is for documenting the session about Resilience in Matera, held by local disaster manager Pio Acito.

Resilience is about reflection. Natural disasters tend to occur repeatedly in the same areas: Italy is a seismic area, as Africa pushes it northwards 1 cm a year, and earthquakes occur over and over again over the centuries in the same areas. Matera has another structural problem, that of flash floods. Irregular rainfall, steep terrain and the fact the the whole Sassi are more or less covered in stone, hence waterproof, lead to water running downhill very fast and all concentrating in few funneling points (20-30 minutes between the start of the raiinstorm and the full force of the flash flood). In fact, the only two drivable roads in the Sassi are repurposed riverbeds!

Unfortunately, people forget quicklu, so they don’t prepare. In 1917 three people died in a cave during a flash flood: that cave is now a quality restaurant. A flash flood on a Sunday lunchtime might lead to endangering 50 people.

What to do in the event of a flash flood:

Challenge: a further safety hazard comes from the monolinguism of the Italian media. In the event of a disaster, the radio/TV will be putting word out in Italian only. This is not good enough. Matera is visited by many international tourists; also, it hosts a community of about 800 Chinese, some of whom don’t speak Italian. So, edgeryders and unMonasterians are asked to design pictograms (no words, just images) that can show people what to do in the event of a flash flood. During the session we sketched several proposals. The challenge now is for people with design skills to polih one or ore of them and pass them over to Pio. 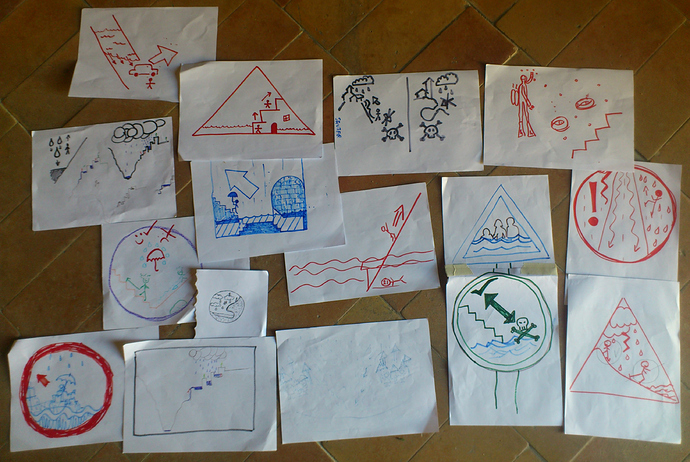 Well done!..well, I feel to define it so great, because the images have a common language, so clear, direct and immediate.

What a genial idea!