This post is the result of an interview produced and edited by @Noemi.

I studied Business Psychology and got in touch with housing and property management, bookkeeping etc. when working with my family’s business. With my brother, we realised it’s not the thing to do, quite boring. After this first experience, I moved to France for a Master in Entrepreneurship and Innovation Management. The second touching point for coliving was this: as a class, we were 23 people in a very international group bonding very well, hanging out in the weekends and studying together. I learned what it is to be inside a community. In the student residency it was the opposite, everyone had their studio apartment, but no common areas, so just saying hello and bye on the corridor. I was also working on a student consulting for a coliving in London, and I got to know about coliving. At that time we were thinking with my brother we should do something in Berlin.

We started Happy Pigeons right after I came back from France, but took a long time. We wanted to rent something, but didn’t find it. The landlords were not convinced. Took us half a year to find something, and in the end, even if it wasn’t intended as such, it was the family business. 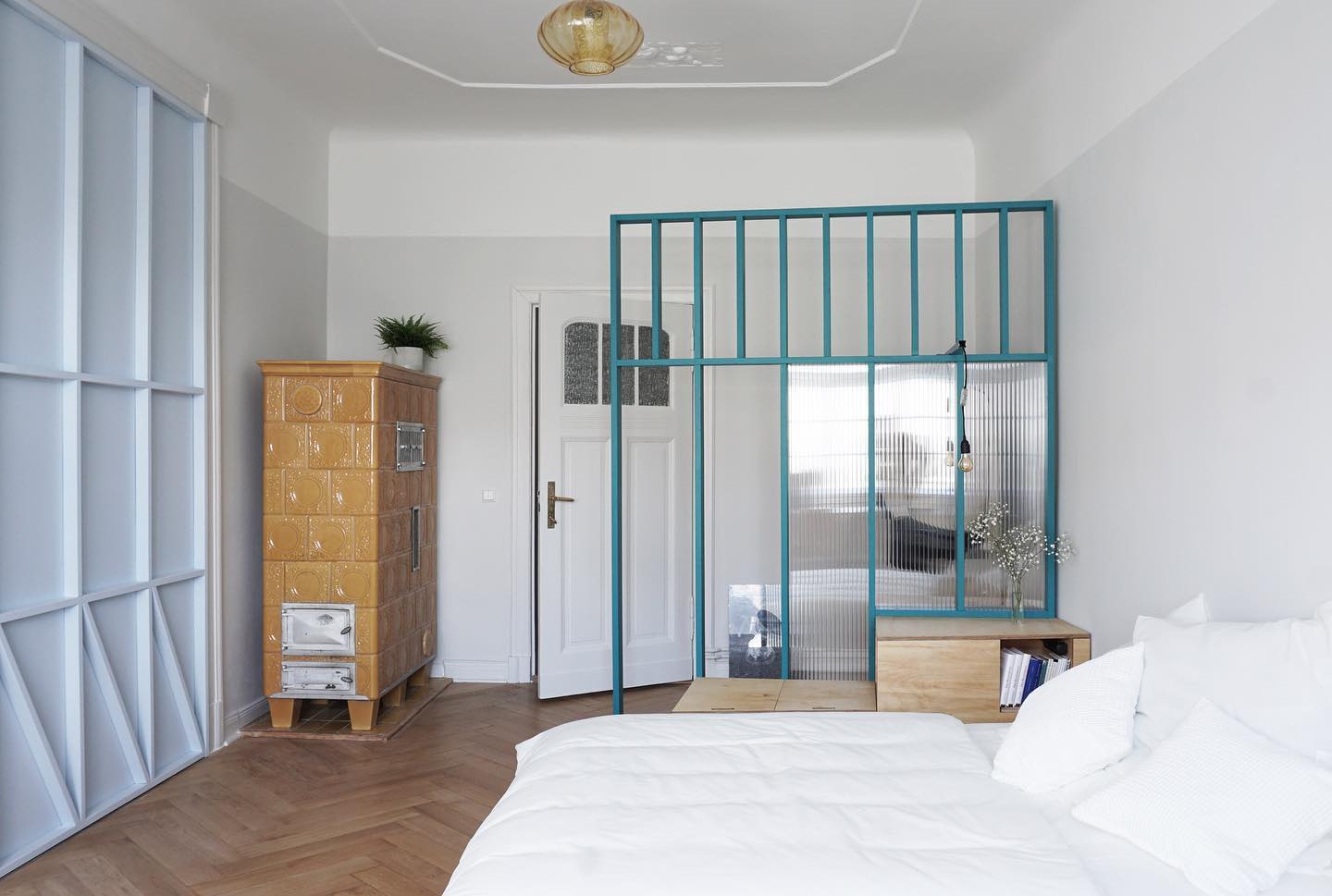 We were founding the company in 2016, and the first 3 room apartment was in March 2017, in Prenzlauer Berg. Since then we have been growing organically - in the first house, but also in the 2nd location in Charlottenburg, with 2 apartments for 5 people. All apartments we have are old building apartments, kind of community style. All have common spaces: livingroom and kitchen, as well as 1-2 bathrooms per apartment. You have small communities within a big community. We decided to keep it this way and not have one huge common space - it could have the opposite effect and everyone would stay in their room.

It was key to us that we want to have a connection to the neighborhood - we know the difficulties here, the tense situation of Berliners thinking ‘these internationals…’, and the internationals staying in the bubbles.

The relative majority of all applicants for Happy Pigeons is German (10-12%), and then international. Those who live here in the first house are an international mix: 4 German people (1 from Berlin), and everyone else came to Berlin. We have between 10-35 application/ week.

This year we had 450 applicants for 5-6 free spots. It’s very nice, but also very difficult - for processing all. The applications are ongoing, but if we don’t have a free room they get to the waitlist. If we have something we announce it to the people who applied. We decided to have an open application because there’s nice things coming out of that i.e. people who will only use the work space.

The process to be selected: 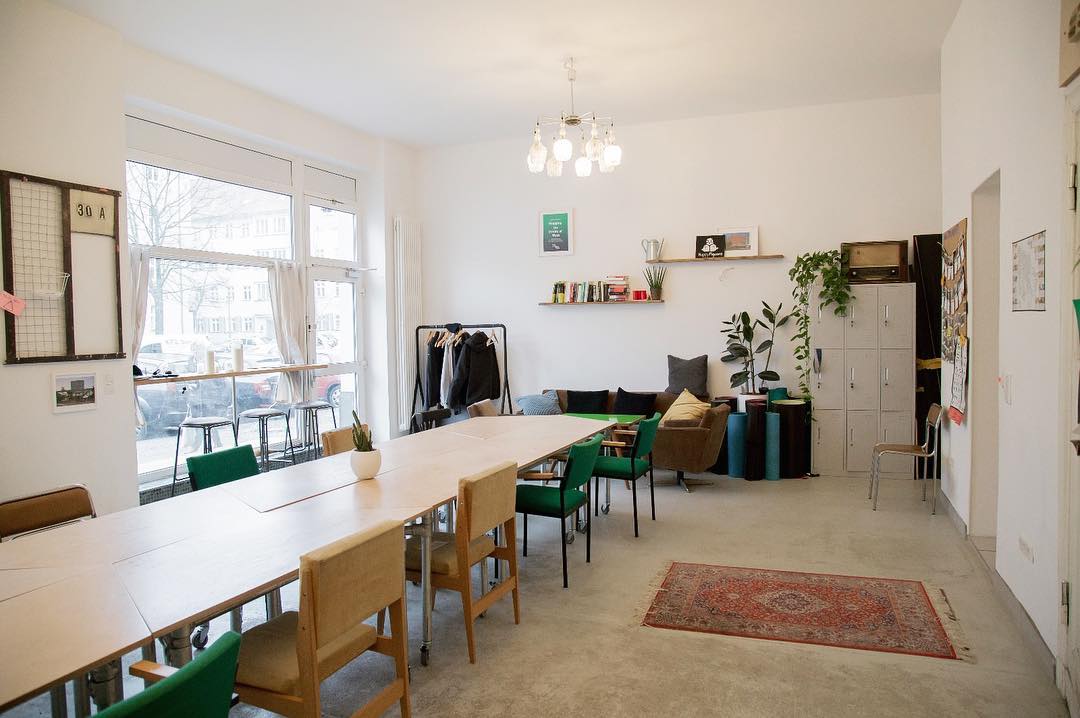 The average turnover for coliving is 8 months. I think that’s a good mix, we have people who stay three years and others who stay three months. We ask in the beginning how long you think you will stay, but then the rental contract is unlimited. 1 month cancellation notice, plus we cannot cancel the contract, it’s their choice. 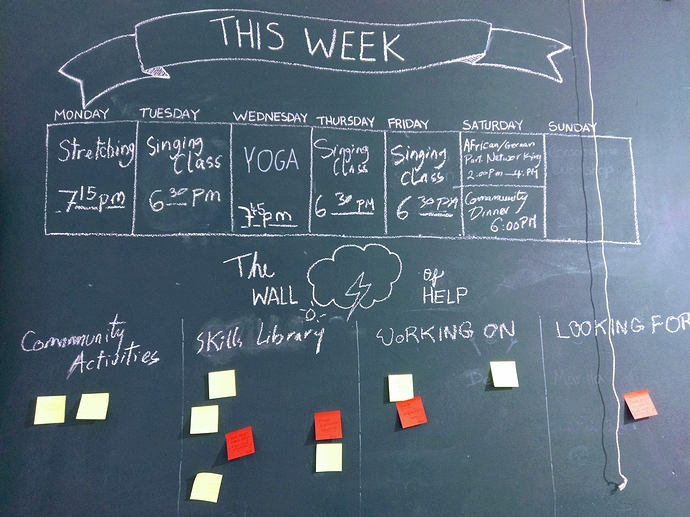 For the common spaces, for example in the first house:

All the activities during the evening are ‘self-organised’. Partners have the keys to the space, they come, make their setting and when they leave they prepare the space.

On the weekend it’s also self-organised - mainly the people upstairs have the keys.

Do you guys live in the space as well? Tell me about the team and your life/work separation

We are here during the weekdays. The team is me, my brother, and a part time community/ operation manager, and we are also thinking of projects together. Why we decided to hire someone? We wanted a new input, Marc and I are pretty similar. We wanted to bring the community stuff at the next level, bring some action.

We have 2 roles - part of the community, part organising the community. We used to live there in the beginning, to test, for 2 months. But since most of the time we are here in the co-working, it would be too much. We can get called sometimes in the weekend, because everyone has our number. We thought there has to be a separation. Now we have a business phone and whatsapp - with working hours, from 9 to 6, Monday to Friday.

How do people in the neighborhood join the common activities?

We don’t do advertisements, people find us through google maps (Cowork Prenzlauer Berg). We have a test case -some people really like it, others don’t feel it at all, they want a bigger space, anonymous co-working. The average time for a co-worker is less than co-living, 3 months. Most people are freelancers. For the activities, the yoga/ stretching it’s a friend of mine who was looking for a space, we organise it together. For the singing club, not sure how they found us.

Payments get negotiated on a case by case basis, and it’s an evolving relationship: people can host and maybe develop a client base, and then they can pay a small amount based on their number of attendants. If new people want to do other activities - we say we want to make it fair, so we take 10% of whatever you earn.

Are there rules for living together? If so, who made them?

We have one poster showing the values in the kitchen and something similar in every apartment. We don’t have house rules in the apartments. The values say indirectly how you should behave. Once we had a small conflict with the 3 room apartment, but they met, talked it through and it was OK.

What do residents say is the best thing about living together?

A mix of being part of a community and have a good start in Berlin, and having cool people around. Everyone is similar in values. And also to have a nice, private small community in a big community. I think our rooms and the whole setting is not a serviced co-living, but the feeling of having a real home. A lot of co-living spaces - everything is planned for you. Here, a lot of things are self organised.

What if the management team would not be there, would it work?

It’s very important for people to feel comfortable, because it’s their home.

Got any question? Feel free to post them below and let’s keep learning together,
And see you at The Reef Codesign Sprint on Thursday 28 November!

Fascinating report. I certainly agree on the value of a longer interview process before choosing because as you say it is not for everyone and unfortunately it actually does not take that many bad apples to mess up the whole barrel. Chronically difficult people can have the effect of driving people more into their private spaces. And by the way I totally agree on the value of having common space for creativity. I have a friend nearby who live communally with a group of senior women. They have a pretty big common music and creative room and it greatly improves the quality of life there .