Speculating identity and agency in the next generation internet: the case for entitlements 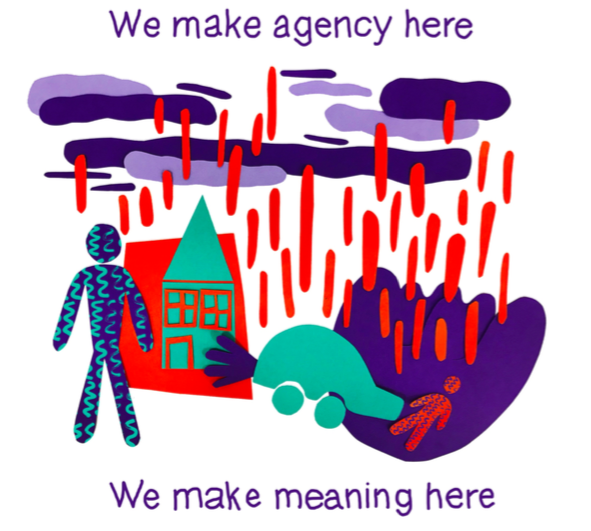 Right now policymakers, activists, philosophers, innovators and citizens are collaborating to figure out how to write identity rights into the (future) infrastructures running our lives.

It’s been accepted that GAFA (Google Apple Facebook Amazon) have already captured our data – ie. we have had to give up ownership of the information that categorises our behaviour and classifies our identities in the interests of the market, and in certain instances biopolitical control. Perhaps most simply, this occurred because regulation couldn’t keep up with the pace of technological advancement. But the value doesn’t end in data, and another layer has emerged that may offer a way to reclaim the rights to our identity in a new language. A language that may in fact liberate us from the social codes that have held us back. A language that has the power to move beyond class, gender, race, able-bodies, and even human-ness, and orient itself rather in the right to choose. This language might just be made possible through entitlements.

Being under versed in the technicality of the internet and much more at home in speculating decentralised infrastructures for collective wellbeing, I admit now that I am missing certain finite details behind the complex field of entitlements. And this is why collaborative leadership is so important: it is what brings heads of government units to share a table with philosophers and vice-mayors, digital security advocates, software developers, vendors and activists to figure out how to write choice (back) into the intricate internet of our daily life. As far as I understand, it goes a little something like this.

Policy makers, digital social innovators and regulators are trying to build mechanisms that link the identity of a person, thing, interaction, or environment with the act of choosing when and how to share that identity. Take for example the fact that even though I’m 34, about half of the time I still get asked for ID when I enter a bar. And when I provide an ID card to prove my identity the bouncer ends up accessing not just my age but also my name, citizenship and birth place, address, gender, physical capabilities etc. Not only that, but more and more bars are choosing to scan and store this information in their database in case I “misbehave” (and on follows a passionate debate between a bouncer and myself one evening this past Spring in Brixton). The case for entitlements as I understand it, is that any identity should have the right to choose which pieces of information that make up that identity are relevant to share in each context. Eg. here’s my age, that’s all you need friend.

Right now, with the proliferation of “smart governance” and IoT it’s not just human identities that need to be addressed. What happens when an autonomous driving car hits a smart lamppost that falls and burns down a heritage-listed forest that is the sacred site of the local indigenous people? For example. Which follows that what constitutes an identity and how that identity is a) implicated in a situation and b) has rights in that situation is brought into wonderful and inspirational question.

Now I could go down the rabbit hole of identity politics right now and rest assured I’ve spent some time in there. But I trust my allies working in anti-oppression movements and post-structuralist critical theory are doing fine work on that. Rather, I’m drawn to how we translate the challenge of discrimination and biopolitical manipulation into a platform for agency via the background rooms designing and regulating entitlements. In these rooms sit people from all walks of life asking a fundamental question in the urgent context and fluctuating visibility of technological progress. In all our quests for asserting basic human rights, we are at increasing risk that no matter who we are, the networked infrastructures of our daily lives are swiftly diminishing our autonomy.

At the recent workshop lead by Rob van Kranenburg and Marta Arniani as a part of NGI Move where I was introduced to entitlements as a kind of value layer above from the data layer, I found myself being drawn to the connections and dynamics between identities more than the identities themselves. It seems to me that a way to orient towards rights in a situation is to understand the impact that the situation’s parts have on each other, enabling or hindering their agency. I began asking: What might happen when the dynamics of interacting identities involved in a situation becomes a kind of ledger? A kind of account of what happened from the situation itself in order to reveal the entangled impacts on each part. Could entitlements be based on another kind of classification system created by the dynamics and impacts of interacting identities, or parts of identities, rather than existing ones such as citizenship, age, preferences? Inspiration for this has come from, among other things, a workshop on the democratisation of financial tools with the Volatility Working Group, Economic Space Agency and Senselab at NYU and The New School in 2017; where I learned about how volatility in the financial sector is at its most simplest, the production of new value by tracing and capturing the dynamics of change. And so ensued an inspiring conversation on the dynamics of identities towards entitlements that ended up for me somewhere here. 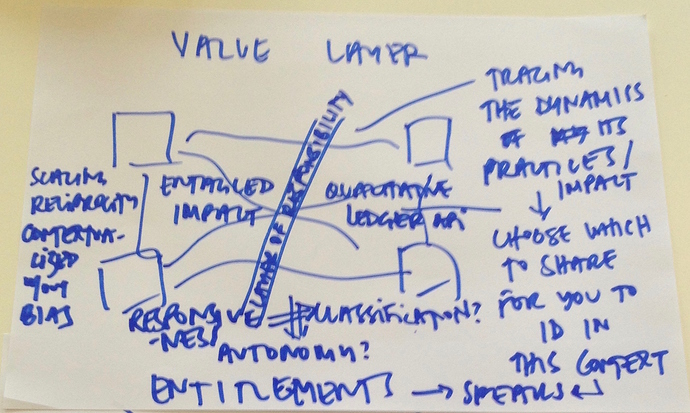 …
When we shared our ideas to other colleagues towards the end of the workshop they rightly so were confused, and then simplified our proposition to the equation and coordinate system of:

Just as we are being called to move beyond existing classifications of identity for inclusion and agency, I’m not convinced that we can classify the interaction between identities towards entitlements in the same way we ever have. When reflecting on this with my mum, she hit the nail on the head: “We need new symbols.” In other words, just as we are seeing gender neutral restrooms with neither a male nor a female symbol to welcome in the transfluid and gender-non-conforming, and just as we’re extending on quantitative indicators of impact to qualitative; could it be time for a fresh and agile set of symbols responsive to the complex systems of today? A kind of choose-your-own adventure for how I piece together the many parts of me.

By now, of course we’ve moved on from simple again, and how easy it can be to do so. But this is our challenge is it not? The art of co-creating simple, open and elegant infrastructures adaptable to the complexity of our becoming-futures. What’s more, this is really just the beginning of a series of reflections bringing together my work in strategic partnerships across innovation, governance and development with my speculative research-creation practice. And it is shared in the spirit of thinking out loud to invite your and others’ perspectives to join in this collaborative quest.

Let me close then with some concreteness. Firstly to direct you to some allies already working hard on identity rights and management in the DECODE project, providing
“tools that put individuals in control of whether they keep their personal information private or share it for the public good.” Secondly, to some excerpts from Rob van Kranenburg’s report on the entitlements workshop:

The first result is about language. Mental imaginaries surrounding new technologies are mainly negative. The participants proposed to move away from this terminology in Next Generation Internet, from security and surveillance to safeguarding democratic values, from notions of control in identity management to the framework that states that you can assert and assume your rights if you have a proper identity, from one single fixed identity to federated identities…

The second result is a validation of the productive nature of the term ‘Entitlement(s)’. This is not yet defined formally and may not be for quite a while. At the moment it allows us to reflect about one of the key aspects of the Digital Transition: the fact that persons, goods, situations and interactions are all acquiring digital twins as they radiate data from their data bodies.

… The third result is a validation of the system approach that NGI proposes as Entitlements are linked directly to services and infrastructures, and as such to a new value layer that is independent of who hosts or has the data.

And so here I find myself: amidst intersecting conversations and projects on entitlements, #nextgengov, comment s’agir in afrofutures, networks of trust and so on… hearing loud and clear the call for new means of signification through encoded futures and towards autonomous wellbeing. Easier said than done of course, but that’s why we have our collective intelligence.

Almost exactly ten years ago, I was in Brussels for the very first European meeting of people involved in what would later become known as “open government”. It was very grassroots – David Osimo, at the time a European Commission officer himself, persuaded his higher-ups to give us a room for free, and everyone paid for their own travel. Tom Steinberg was there, and Dom Campbell, and Lee Bryant, and Marko Rakar, the people that were breaking new ground at their respective national levels.

It was all very new. And yet, we were already speaking about the idea of holding personal data in “digital wallets” that people would then allow different applications to access, on a need-to-know basis. DECODE is going down the same way, if my understanding is correct. The idea just made a ton of sense, as it does now, and so it kept resurfacing at regular intervals. So, we need to be asking ourselves: why did it not happen in these ten years? Why is the Internet, if anything, less decentralized now than then? How credible is the next attempt to go in the same direction?

There seems to be an understanding among non-naive thinkers (like Alexander Galloway, Vitalik Buterin and Nathan Schneider) that we can not attack this problem with a sweeping, elegant theory, as all such theories are likely to be contradicted by facts. “Be specific”, Schneider warns, and I believe he is onto something. We even have an anthro/ethno approach to do it, which should help us to not collectively fall in love with some nice buzzword or fancy tech. We will still fall for such things individually – in fact I can see you do it right in this post – but that’s where collective intelligence might help.

I remember, I was there.

As to personal data stuff. From my experience context is key. And binding data to contexts (or rather preventing them to spill into other contexts) is hard. Unless it can be sufficiently decoupled from the individual source (but how future proof will a current method to do that be), then context is less important.

What are the practical experiences thus far? How does Estonia’s x-road fare? How many complaints do Estonian citizens file concerning third party access? Which midata projects have become reality thusfar?

I’ve recently been approached about how to go about setting up a data pool by individuals and health care insurers concerning lived experiences in mental health care (so not medical files but categorised anecdotes by people involved.). So need to get into these issues more it seems.

As human beings in face to face conversations and groups we have an intuitive and very fine grained skill to disclose or not disclose things fluidly. That is of course aided with the absence of permanence that digital records create, and the inability of conversation counterparts to (unseen) recombine what you tell them with other things. Confidence(!) artists, scammers, diplomats and on the ground intelligence agents have been at this for years, trying to read or write the tealeaves.
How do we mirror such deeply human traits onto our extended digital networks and interactions?