Spreading the word about the info session on 24 October

On 24 October we will be organising another information session in Brutopia to recruit new Reeflings.

The more people we can attract to this event, the faster we’ll be able to move on to purchasing a site.

Word-of-mouth seems to be our ally

From the past two sessions we have learned that people mostly seem to find us through word-of-mouth, sometimes through friends of ours but most of the time via social media or flyers.

In other words: the way we think it happens is that somebody learns about The Reef, and then tells a friend who has been looking for a cohousing.

How you can help

Now that our group has grown so much, it should be easier to reach more people. Would you be willing to take a moment to get the word out?

Getting the word out is more important than you may think. Even if people aren’t interested themselves, they may remember our name, which may come in handy later on. As an example: we already got contacted once by some person who found a site that might interest us. 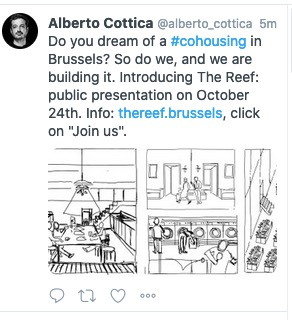 Onboard! Already started dishing out flyers

Actually could we get some more? The social event on Saturday might be a good way to spread them around…
Who has them at the moment? Will you be able to bring them? Do you need help?

Who has them at the moment?

This is Team Communication Materials’ responsibility. They are on it.

If you would like a preview, you can have a look over here.

@reef-comms anybody coming on Saturday ? Could you bring some? Even some of the old ones?
Or alternatively maybe bring them at the plenary?
Thanks!

yes! we will bring some

Quick update: we now have 20 people who have registered via the form. That is much less than I had hoped for.

Would you be willing to have a look at how we can reach more people? Maybe put out some more flyers? Maybe contact that one friend who has a lot of contacts on Twitter or Facebook? Or anything else that could help?

I came across a speed dating event on habitat et participation website, on the 19th of October…

It’s on a Wednesday at 12pm though… And quite close to the 24th…
What do you @reeflings say? Worthwhile? If yes, anybody able to go?

I came across a speed dating event on habitat et participation website, on the 19th of October…

I sort of dread this kind of things, but I put it in my calendar.

I think the event is full anyway :-/ If you click on the registration button, you get this message : " Le formulaire a atteint sa limite d’entrées."

Now on the principle, I think this kind of events could be a good way to find new candidates… But that’s more a decision to be made by the Team Recruitment I think