Striking in the 2010s and the sadness of it all 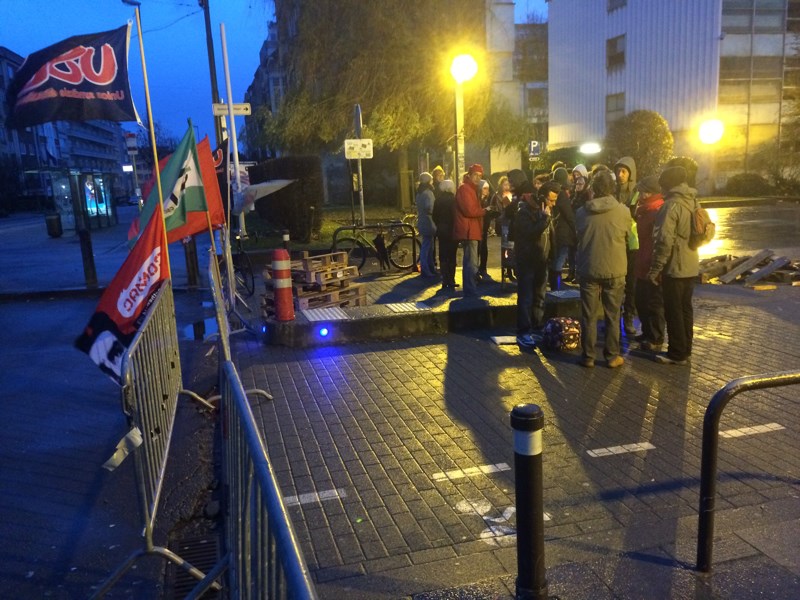 So, I walked the streets of Brussels today [December 15th 2014] – public transport is down because of La Grève, The Strike. Belgian trade unions are on the warpath because of the new government’s yet-to-be-introduced austerity policies, including a rise of the retirement age from 65 to 67 by 2030. As I walked past the small groups of striking workers manning the picketing lines I could not help feeling sad.

In part it is the sheer loneliness of the tableaux vivants I saw as I walked. In the gray winter morning, Belgian strikers huddled around brasiers to keep warm. They looked present-shocked and lost in a world that they don’t understand. They looked very homogenous, too: white, middle- to late-middle aged.

But mostly it is this: I think these workers have absolutely no chance in hell to succeed. The demand for welfare (state-provided education, health care, pensions) keeps growing; so far, we have met it by increased government budgets, but they now stand around 40-45% of GDP in most European countries, and it seems politically impossible to further increase taxation. An aging population means that fewer active workers are supporting more pensioners. Persistently high unemployment means fewer people are saving anything at all for their retirement. Persistently low interest rates mean that, even if you do have a job and you have been saving, your pension will be smaller than you planned. And that’s assuming your pension fund managers, desperate for yield, are not buying into the next bubble; that climate change will not drown us all; and so on.

Do I like this? No. Does my opinion make any difference? No. Does yours? No. Every social actor, individual or collective, that has tried to reverse or control these trends has been hopelessly outgunned and outmaneuvered. Emergent social dynamics are at work, and it seems we cannot touch them – actually, we are fueling them, every time we pay a mortgage installment or fill the tanks of our cars, or decide not to have a child just yet.

There is no way most countries are not going to raise legal retirement age. In fact, humanity seems on course to reverting to its historical default of old people being poor. The only achievable goal for the striking workers is to hold out a little longer. Manage to retire at current conditions; then join a Pensioners Party and defend the monthly check as long as they possibly can, hopefully dying of old age before defeat. They just might be able to save themselves; there is no way they can save their children. Unionized workers are getting ever older throughout Europe (already in 2010, 52% of the members of Italy’s CGIL – Europe’s largest union – were pensioners). With these numbers, trade unions can’t help taking sides in the generations war. And they will either lose it, or win it, but damn everybody else in the process: the young unemployed, the migrants, the homeless people taking their sleeping bags at Gare du Midi, even their own children.

What a contrast with the generous young people here in Edgeryders and elsewhere, scrambling to fix the world’s problems. That includes providing for the elderly: they – we – are experimenting with living together in intergenerational communities like the unMonastery. Most of them have very little money; practically no one has any stability; and yet, so many are willing to show up and make a stand – for all, not just for themselves. Their example humbles me; I just have to step in and try to help. These Belgian workers on strike, on the other hand, are probably very decent human beings, but they are fighting the wrong fight and I will not stand with them.

“There is no alternative”

“Michel says there is no alternative to austerity aimed at cutting some €11bn from the budget over the next five years. Officials point out that the country has the third highest tax burden in the OECD, at 44.6%, while annual growth for 2014 is projected at just 0.9%. Michel’s coalition wants to raise the retirement age from 65 to 67 from 2030, and freeze the wage indexation system that automatically lifts salaries in line with inflation.” – The Guardian